How the Fire Service Has Progressed Over My 27-Year Career

It has now been about a month since I officially retired from the fire service. I can’t tell you how relaxed and happy I am. Spending 27 years on a fire truck really took a toll on me, both physically and mentally. I miss my crews but it was time for the next chapter of my life.

I was a firefighter for more than half my life. My husband is also a firefighter and has a few more years before he can retire. We’ve been married for 23 years and now both our son and daughter are firefighters as well. I guess you can say firefighting runs in the family. It’s a career that requires a lot of sacrifices. I worked countless 24-hour shifts, and missed lots of family holidays and events.

Firefighting is a tough job, and when I started it was still largely uncharted territory for a woman, which came with its own set of challenges. When I look back over the last 27 years, I am really proud of what I’ve accomplished and of how much the fire service has progressed.

Why I Chose to Become a Firefighter

I started out as a career firefighter on September 21, 1992. In college I planned to become an athletic coach and started working part-time at a local swimming pool as a program supervisor, lifeguard, and swim instructor. As fate would have it, this was also where the county’s police and fire departments conducted their physical agility training. I was training to do triathlons and several firefighters approached me to ask if I would consider applying to become a firefighter. They were having trouble finding women who could pass the physical agility test.

After lots of thinking, I decided to apply. I scored average for the written civil service test and passed the physical agility test with no problem. One month later I got the call to come in for an interview and that’s when my career in the fire service started. At 25 years old, I started out on a yearly salary of $21,500. Being a college athlete made me familiar with teamwork so it was an easy transition to rookie school. I was used to self-discipline, working out, and pushing myself. I was in a class of 50 incoming recruits so they separated us into two groups. Back then we did three months of fire training and then three months of emergency medical technician (EMT) training.

First Days at the Fire Station

I still remember my first day in a fire station. I was so nervous but anxious to run calls. My first station assignment was at a chief’s station with an engine and a rescue vehicle. My department had about 500 career firefighters at that time. I was paired with another female to help me settle in. I heard some grumbling from the men that their wives were uncomfortable with two female firefighters sleeping at the station. Apparently the older generation wives were not real excited about women working 24-hour shifts with their husbands.

The sleeping area was an open room where we each had a twin bed with a four-foot wooden partition separating the rows. There was no privacy. Eventually I met all the wives and they were okay with me working there. I ended up becoming roommates with my Captain’s daughter for several years until I got engaged and married. Most stations nowadays have better room partitions, curtains in bunk rooms, and separate bathrooms and showers for men and women.

Most importantly, as crews and communities are becoming more accepting of women entering the fire service, they are benefitting from the diverse perspectives, skillsets, and strengths that they bring to the job.

How Emergency Calls Have Changed

When I started in the fire service, we ran so many more structure fires, vehicle fires, and grass fires and not nearly as many medical and non-emergency calls as today’s firefighters. I think I ran my first structure fire on my third shift. It was fully involved on arrival and was only defensive. Back then our self-contained breathing apparatus (SCBAs) were carried in an outside compartment on the engine or rescue vehicle so we would dress in our gear at the station and grab our airpacks after we got to the scene.

Sometimes firefighters wouldn’t grab their airpacks and just grab a hose to “knock the fire down” and slow its progress. I remember lots of times when we didn’t wear airpacks at all during “overhaul” or when finding hidden fires. We’d always joke about how black the snot from our noses was when we blew them. No one ever mentioned the risk of cancer back then; we just did our job and the dirtier your gear was the “cooler” you were. Today, departments are much better at educating firefighters on maintaining both our physical and mental health.

Fires have always been hot and dangerous but nowadays they smell a lot different with more of a plastic, chemical smell because those materials are used much more commonly. I always tell newer recruits that fires today burn hotter and faster and the fumes are more toxic, so they need to take precautions such as always wearing their SCBAs and hosing down their gear and equipment.

Firefighters’ personal equipment is much better fitting now than when I was first hired. I wear a size seven in men’s boots and the smallest they had back then was size nine, so I had to wear three pairs of socks to help them fit. I remember multiple times in training while crawling my boots would start coming off and we’d have to stop so I didn’t get hurt. Finding gloves that fit was also a challenge but luckily they were able to find me a pair of forestry gloves that worked. Our SCBAs were also much heavier and longer. They were one size and almost reached the bottom of my knees so when I was crawling it would often knock my helmet off. Gear now is specifically fitted for every firefighter, male and female. We get new gear every 10 years and always have a second back up set if needed.

Our engines in the early 90’s were called “open cab” and they had two jump seats in the back beside the motor that got really cold in the winters and really hot in the summers. I remember sitting in one of those seats after getting newly engaged; I was peeling off my EMS gloves on the way back to the station and my diamond engagement ring flew into the roadway and into a grassy area. I immediately banged on the window to get my officer’s attention. We went back and searched for over an hour before my now-husband brought a metal detector and we were finally able to find it.

After that incident I never wore my ring on duty. Now all our vehicle units are enclosed cabs and we have internal headsets so we can talk to each other if needed.

Someone recently asked me how many fires I’ve responded to during my 27-year career and I honestly couldn’t remember. If I had to guess, it would be more than 100. But I do remember every fire fatality, the biggest fires I ran, and the two times I was burned. And I’ll always remember my crews. My crews were awesome in keeping me “firefighter ready” and would help motivate me to improve my workouts and diet. Without them I would have never made it to my retirement! I will still go visit my crew, but it’s time for the younger generation to step up and make a difference in their departments and communities!

[Related: Understanding the Volunteer Deficit Will Lead to Better Recruitment and Retention]

The fire service is constantly changing for the better with better equipment, training, and resources. But it’s still up to the individual firefighter, crews, and leadership to not become complacent and keep learning new techniques and ways to keep themselves and our citizens safe. Firefighters need to think of themselves as athletes and be in the best shape they can, whichincludes working on their cardiovascular, strength, flexibility, and endurance. What will never change is that crews need to work together as teams, keep each other accountable and in shape, and have one another’s back. 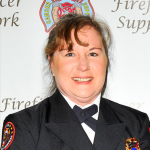 About the Author: Michele Ice has been a firefighter for over 27 years with Cobb County (GA) Fire and Emergency Services. She is now retired. Michele is also a CPR/First Aid Instructor, Community Emergency Response Team (CERT) Instructor, Child Safety Seat Technician Instructor, Hazardous Materials Technician, Firefighter Cancer Support Network State Director, Critical Incident Stress Management (CISM) state team member, Fire Explorer Advisor and on the GEMA Incident Management Type III Team. She is a wife and mother of two (Denver, 18 and Brooke, 20). Both her husband and daughter are career firefighters with Cherokee County (GA) Fire and EMS and her son is a fire explorer. To contact the author, email IPSauthor@apus.edu. To receive more articles like this in your inbox, please sign up for In Public Safety’s bi-monthly newsletter.