Getting to the Heart of Issues Behind Mass Shootings

After the deadly shooting at Umpqua Community College in Oregon, a very intelligent friend of mine posted a question on social media that got me thinking. He asked: “When are Americans going to do something about their angry 20-year-old white men with guns?”

As a retired law enforcement officer, I no longer put the uniform on, wear the vest, or hang the belt on my hip. But I do continue training to maintain the proficiencies and skills that a career in law enforcement taught me. If confronted with a threat today, I maintain the ability to neutralize that threat. But not everyone possesses such training and skills. So what can the average citizen do to help prevent such incidents? 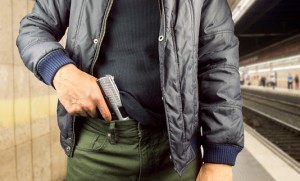 While the conversation about gun control continues, it is important to remember that a gun is just a tool. Any student of history will tell you that the gun is just one of many weapons used. Explosives, edge weapons, vehicles, and improvised weapons—to name a few—have been used to cause mass casualties.

When it comes to the issue of race, such horrific incidents are not restricted to any one race or gender. However, such incidents do have some constants, namely religion and mental illness.

The problem isn’t with organized religion, it is often with individuals who use their interpretation of religion to justify crimes against others.

[Related Article: Lone Wolves: Are They Really Alone in the Radicalization Process?]

To identify those who have taken their religious beliefs to a threatening level, law enforcement agencies often rely on intelligence gathering and monitoring techniques. Using technology and human sources, police can identify individuals of concern and monitor their behavior patterns. If threats persist and there is evidence of action, police can detain those who seek to commit a crime, or, when detection fails, neutralize the threat and/or arrest the individual after the fact.

The Role of Mental Illness
The second common denominator in many of these crimes is mental illness. Our mental health system in the U.S. is dismal by many accounts. The system is understaffed, underfunded, and underutilized.

Having worked with the mentally ill and, consequently, mental health agencies through the years, I can attest to the fact that there are not enough resources to treat all those who need and want help, let alone the staggering number of individuals who need help, but do not want it.

For those who read about such tragedies and want to know how they can help, start in your own community. Consider volunteering within the mental health system as understaffing can be offset with the use of trained volunteers. Find out which facilities in your area need volunteers and see what you can do to help.

Contact politicians and elected officials to request additional funding be directed to these mental health providers and agencies. While none of us can predict the next perpetrator of such crimes, every bit of assistance to someone suffering from mental illness can help.

About the Author: Dr. Chuck Russo is the Program Director of Criminal Justice at American Military University (AMU). He began his career in law enforcement in 1987 in Central Florida and was involved all areas of patrol, training, special operations and investigations before retiring from law enforcement in 2013. Dr. Russo continues to design and instruct courses, as well as act as a consultant for education, government and industry throughout the United States and the Middle East. His recent research and presentations focus on emerging technology and law enforcement applications, in addition to post-traumatic stress and online learning.