Decapitation: What Happens To Threat Organizations When They Lose Their Leadership?

On January 3, General Qasem Soleimani met his death at the lethal end of a US MQ-9 Reaper drone aircraft. As the leader of the Iranian Revolutionary Guards Quds Force, Soleimani was responsible for covert and terrorist operations worldwide that resulted in the deaths of thousands of people, including hundreds of U.S. servicemembers operating in the Middle East.

While many in the media obsess over the decision-making processes leading up to the strike on Soleimani, intelligence analysts must instead focus on understanding and articulating what his death means going forward.

How will the decapitation of Iran’s covert military arm affect its operations? Will it change its targets, its methods of operation (MO), or its capability to operate against American interests in the Middle East and worldwide?

Undertaking this type of predictive analysis may seem like a daunting task, but the good news is there are two tools, historical case studies and threat profiling, which can help intelligence professionals better understand the effects such a loss of leadership might have on a threat organization.

History offers many examples of notorious leaders whose demise brought about a fundamental change in the operation of a threat organization. For example, analysts can study and evaluate what happened to organizations after the death of prominent leaders such as Andreas Baader of the Red Army Faction (AKA Baader-Meinhof Gang) who died in a German prison; Yasir Arafat of the PLO who died of a stroke; Shoko Asahara of the doomsday cult Aum Shinryko who was executed by hanging; and Osama bin Laden who was killed by the U.S. Seal Team.

The deaths of these leaders significantly affected the organizations they led.  After understanding the impact of leadership loss in other organizations, intelligence analysts can then look at Soleimani’s death with a historical perspective.

Using Threat Profiling to Understand the Impact of Leadership Loss

When a threat group such as the Quds Force suddenly loses its leader there will be primary, secondary, and tertiary effects throughout the organization. The best way to understand these effects is through an analytic method called threat profiling.

Simply put, threat profiling involves analyzing an organization based on distinct components such as its targets, methods of operation, and the group’s organization and leadership. Each of these components is significantly related to each other, so sudden changes to any one of them will have direct and indirect effects on the rest.

When an organization is decapitated (i.e., suddenly loses its leader), the most significant effects will be in its goals and objectives, especially if the organization is driven more by personality than by bureaucracy or an established structure. A replacement leader may change the overall goals of the group and will most certainly designate new objectives to meet those goals. The more powerful the personality of the deceased leader, the more extreme these effects will be. Changes in goals and objectives in a group would also depend on the influence of the parent organization and could also trigger internal disagreement and conflict. 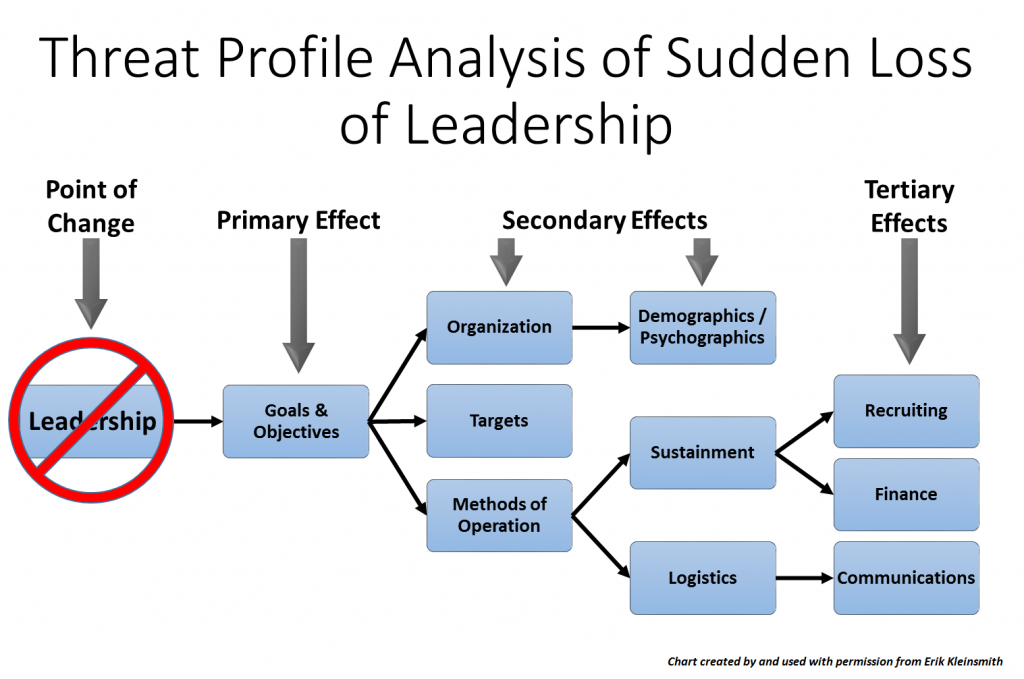 From this point, both sudden and long-term changes will ripple through the organization. The chart above uses threat profile components most critically affected by loss of leadership and then arranges them in relation to each other in order of primary and secondary effects. Tertiary effects take the analyst one step further by going into further detail in some areas.

Analysts can tailor this chart to fit their scenario, using it both to organize and prioritize their analysis as well as articulate their findings to their supported decision-makers.

Intelligence Analysts Must Re-Evaluate Previous Analyses of the Group

With the group now working to fulfill the intent of the new leader, intelligence analysts should re-evaluate both their indicators and collection efforts to pick up on any changes to the organization, its targets, and its MO.

Lastly, there are several aspects to how a group operates that analysts should consider. For example, General Soleimani was seen as a charismatic but shadowy leader with significant personal influence throughout the Middle East. Going forward, analysts should look at the Quds Force’s ability to coordinate for local sustainment and logistics after the loss of such a powerful personality. They should also look at potential changes in the Quds Force in terms of its public face – its messaging and propaganda – as well as its ability to recruit and sustain its numbers of both members and local allies.

By using a group’s threat profile, intelligence analysts can more easily prioritize their analytic workload toward those aspects of a group that will most significantly be affected by decapitation. In turn, they can also more effectively articulate their findings to their customers and decision-makers.

About the Author: Erik Kleinsmith is the Associate Vice President for Business Development in Intelligence, National & Homeland Security, and Cyber for American Military University. He is a former Army Intelligence Officer and the former portfolio manager for Intelligence & Security Training at Lockheed Martin. Erik is one of the subjects of a book entitled The Watchers by Shane Harris, which covered his work on a program called Able Danger, tracking Al-Qaeda prior to 9/11. He is the author of the 2020 book, Intelligence Operations: Understanding Data, Tools, People, and Processes. He currently resides in Virginia with his wife, son, and daughter.To contact the author, email IPSauthor@apus.edu. For more articles featuring insight from industry experts, subscribe to In Public Safety’s bi-monthly newsletter.