Sorry, But it’s Probably Not Aliens – So What Are Navy Pilots Seeing in the Skies?

Any day now, the intelligence community is going to release its unclassified report to congress detailing everything it knows about the decades-old UFO phenomena.

In 2019, several U.S. Navy fighter pilots came forward to disclose encounters they experienced with unidentified flying objects while performing training missions off the U.S. East Coast in 2014 and 2015.

These encounters directly mirror events involving the USS Nimitz and its air wing off the Baja Coast in 2004.

Both events have their share of witnesses; from highly trained fighter pilots to crew members aboard the Ticonderoga-class cruiser USS Princeton and witnesses aboard an E-2C Hawkeye airborne early warning and control aircraft.

These men and women represent some of the most credible observers of what the Navy is now calling Unidentified Aerial Phenomena (UAPs).

According to reporting by Tyler Rogoway of The Drive “The main revelation is that technology exists that is capable of performing flying maneuvers that shatter our perceptions of propulsion, flight controls, material science, and even physics.”

Rogoway emphasizes that “the Nimitz encounter with the Tic Tac proved that exotic technology that is widely thought of as the domain of science fiction actually exists. It is real. It isn’t the result of altered perception, someone’s lucid dream, a stray weather balloon, or swamp gas. Someone or something has crossed the technological Rubicon and has obtained what some would call the Holy Grail of aerospace engineering.”

Note: The “tic tac” is the nomenclature that the Navy pilots assigned to UAPs since they looked like the popular breath mint.

For its part, the U.S. Navy has recently changed the way it handles UAP reporting, providing an official channel for servicemembers to report unidentified craft incursions into U.S. airspace. First reported by Politico, the previously unreported PR move is in response to a series of sightings of unknown, highly advanced aircraft intruding on Navy strike groups and other sensitive military formations and facilities.

This is a huge pivot from previous Pentagon public information; it represents a significant first step at destigmatizing what military aviators have been witnessing for decades. After all, if near-peer level adversaries like Russia or China have made the technological leap to aircraft that seemingly defy the laws of physics – and violate sensitive U.S. airspace at will – the U.S. military should want to know about it.

Aliens or Something Else?

However, the simplest solution is often the right one.

Is it more likely that we are being visited by an extremely advanced alien race who flew vast interstellar distances to harass our top guns?

Or is it more likely that the UFOs are ours?

Allow me to present the argument against alien visitors:

First, the United States has been pouring tens of billions of dollars a year into the so-called black budget since at least 1947. That budget funds black projects that are classified top secret, not itemized, and are used for intelligence operations and super-secret advanced military technologies.

In fact, in March of 2019, President Trump announced a record-breaking $86 billion for the black budget for that fiscal year.

While I was in the U.S. Air Force in 2005, I had the opportunity to chat with a visiting employee from Skunk Works, Lockheed Martin’s Advanced Development Programs (ADP). When I jokingly asked him what he was working on, not expecting a true response, he became very serious and said, “All I can tell you, Wes, is that Star Wars isn’t just a movie.”

Remembering this conversation years later still makes me giddy with excitement about our troops wielding lightsabers in combat. However, it is much more likely that he was referring to advances in aerospace engineering.

In an interview with Popular Mechanics, the late Skunk Works chief Ben Rich said, “There are some new programs, and there are certain things, some of them 20 or 30 years old, that are still breakthroughs and appropriate to keep quiet about [because] other people don’t have them yet.”

Disinformation Campaigns by the US Air Force and Pentagon

Next, the U.S. Air Force and the Pentagon have a long and storied history of performing disinformation campaigns, often using the deep pop culture roots of UFOs to hide advances in aerospace technology. When national security is on the line, it’s better to have the public believe they saw a UFO than disclose the newest breakthrough.

A report by the New York Times in 1997 shows that the CIA and the Air Force promoted UFOs to cover up sightings of their U2 and SR-71 spy planes. 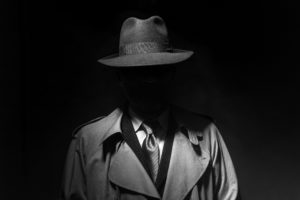 The mysterious men in black, unknown individuals in suits who show up after credible UFO sightings, are none other than members of the Air Force’s Office of Special Investigations. AFOSI is a cross between the CIA and the FBI; in fact, AFOSI was modeled after the FBI. The first commander of AFOSI was former FBI special agent Joseph Carroll. Among AFOSI’s unique mission is the security of technology and information, intelligence gathering and threat assessment, mitigation and elimination.

That makes sense because, in an open society like ours, where the government cannot easily control the flow of public information, disinformation is the only viable option to maintain a degree of secrecy. For its part, the AFOSI is an expert at controlling information.

Finally, it is crucial to note the parameters of the sightings by the Nimitz crew off Baja and more recently off the U.S. East Coast.

Both crews were operating in a sanitized training environment. The aircraft were not armed because no aircrews were expecting a fight, and civilian traffic is largely diverted from active military ranges.

In addition, the Nimitz was fielding a massive new upgrade to an advanced radar system for the F/A-18 Super Hornet and also a new Cooperative Engagement Capability technology. That capability implemented datalink and sensor fusion technologies for the entire carrier group, which provided advanced fidelity in the radar picture.

Imagine taking radar and sensor data from all the ships and aircraft in a carrier group and combining it into a commanding real-time view of the battlefield. Such a massive upgraded system was being tested for the first time when the Nimitz had its first encounters with the now-famous tic tac UFO.

It occurs to me that a sanitized training environment and an incredible new sensor upgrade create an ideal testing condition to see if our own team can spot top secret, undisclosed aircraft.

If the unidentified craft are ours, why were they operating dangerously close to our fighters? The New York Times reports a near-miss, in which a pilot stated that an object appearing to be a sphere encased in a cube almost caused a mid-air collision:

He and other pilots interviewed said the near-miss angered the squadron and convinced them that the objects were not part of a classified drone program. Government officials would know fighter pilots were training in the area, the pilots reasoned, and would not send drones to get in the way.

The other issue is the physics-defying performance of the craft. No matter how good our team is at aerospace development, it’s unlikely we have found a way to break the laws of physics as we understand them. The New York Times report continues: “What was strange, the pilots said, was that the video showed objects accelerating to hypersonic speed, making sudden stops and instantaneous turns — something beyond the physical limits of a human crew.”

We also must ask ourselves if it is likely that the Russians or Chinese have made some astonishing breakthroughs in aerospace engineering. According to an estimate by the Moscow-based Gaidar Institute, about 21% (3.2 trillion rubles) of the 2015 Russian federal budget was “black” (that is, not itemized). This represents a doubling of the budget from 2010.

No matter who is operating the craft, we are confronting an astonishing truth: Someone or something is operating aircraft that seems far more advanced than any known aerospace technology currently in existence; that they can penetrate U.S.-controlled airspace at will; and that there is absolutely nothing we can do to stop them.

Meanwhile, all this talk of aliens has garnered considerable media attention, from front-page stories in the New York Times to 15,000-word articles in the New Yorker, as well as prominent coverage on 60 Minutes and other prime-time television programs.

The New York Times claims to have already read a version of the upcoming report due to hit congress.

“No evidence of aliens. But also, we can’t explain the physics-defying movements of some of these craft.”

If anything, this report should serve to make UAPs more mainstream and, perhaps, reduce some of the stigma associated with reporting about them. After all, someone is operating these craft. If it’s not us, that means that the United States no longer sits atop the technological food chain.

Note: The opinions and comments stated in the following article, and views expressed by any contributor to AMU Edge, do not represent the views of American Military University, American Public University System, its management or employees.

United Nations Summit: An Opportunity to Get Things Done

The Destabilization of the Russian Sphere