By Olivia Kvitne, Founder and Director, Yoga for First Responders

As a yoga instructor working specifically with first responders and veterans, I’m accustomed to being the one who initiates conversations with fire and police departments. So it came as a welcomed surprise to be contacted by one of the largest police departments in the country. The Los Angeles Police Department (LAPD) reached out to me after they lost several high commanding officers from heart attacks. The agency realized that many of its members were experiencing medical issues caused by years of unaddressed, cumulative stress. The department’s behavioral sciences department was searching for ways to save their team members from such preventable medical conditions.

At the time I got the call, I had spent the last several months teaching yoga to members of the Los Angeles Fire Department (LAFD). Word had spread that LAFD was having success using yoga techniques as a resource for reducing stress among firefighters.

Until recently, officers were discouraged from acknowledging that they were having issues coping with stress and the pressures of the job. Such admissions were often considered a sign of weakness and brought into question an officer’s ability to perform his or her duties. As a result, many officers who experienced symptoms of secondary traumatic stress suffered in silence. Sadly, this stress broke many good officers, who resigned or caused them to behave in a way that caused them to lose their jobs.

Fortunately, today there are more conversations happening about how to handle the mental health challenges that go with being a law enforcement officer and first responder. While this is good news, the stigma of acknowledging stress remains, and many people are not actually taking the steps to manage that stress.

Can a Yoga Practice Be the Answer?

As I got deeper into my own study of yoga, I realized that this practice is not just “good” for first responders; it is meant for them. Why? Because the original and true intents of yoga are to obtain a mastery of the mind and achieve an optimal functioning of the entire being—from the subtle nervous system to the whole physical body. This authentic objective of yoga is thousands of years old, with no relation to how recent Western culture has marketed it as trendy and hip.

Individuals who practice with this purpose are often better able to process stress and convert it into higher levels of performance. Yoga allows people to increase their ability to focus and problem-solve, gives them heightened situational awareness, and helps them make intelligent gut reactions to situations. People who practice yoga also have the ability to make self-directed biological changes, meaning they can impact the functioning of their brain and nervous system through their own actions. Such biological changes are shown to be a possible outcome of those who practice mindfulness exercises, such as yoga, thanks to research projects using biofeedback machines that track activity inside the brain and body.

When stress is trapped in the body and mind and no action is taken to process it, stress causes a depletion of a person’s health. However, when individuals take steps to consistently handle the stress they’re feeling, they can improve their well-being and even become more resilient in the face of adversity.

How is Yoga Different For First Responders?

Yoga For First Responders takes the original intent of the practice and delivers it in a way that targets the specific needs of first responders. The curriculum provides a skill set that is simple, safe, practical and effective. This protocol primarily focuses on tactical breath work (specific breath-control techniques) to access the nervous system, physical postures for releasing stress and building mental and physical stability, and ends with a neurological reset exercise to return the system to a balanced state.

If, after reading the information above, you are still skeptical about stepping on a mat, here are five reasons to consider changing your thinking:

Something needs to change in law enforcement culture, so these statistics can change. The “macho” stereotype that has kept law enforcement away from yoga is not worth these devastating numbers, especially when you realize how strong and focused you must be to practice yoga, as well as how much stronger you will become when practicing consistently.

Why You Should Start Now

The good thing is that it doesn’t take much to start a yoga practice right away. Here is a simple exercise to begin your journey toward reducing stress in your life:

Practice the above exercise for 3 minutes at a time. Breathing through the nose while directing the breath low into the belly and consciously making the exhale longer than the inhale are the three ingredients to press the “calm” button on the nervous system. This process will also help if you are having a hard time falling asleep. This exercise is simple and subtle, yet the effect on the nervous system can make a huge difference.

For more simple and short practices on video, check out our videos on Yoga for First Responders. 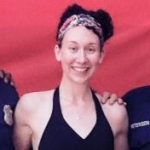 About the Author: Olivia Kvitne has been a lifelong yoga practitioner and an instructor since 2003. While living in Los Angeles, Olivia taught weekly trauma-sensitive yoga classes at the Los Angeles Fire Department (LAFD) Training Center, as well as presented continuing education workshops on yoga and the neurological system for LAFD, and special workshops for high-ranking command staff of the Los Angeles Police Department (LAPD). It is at LAFD where Yoga For First Responders was first born in collaboration with Dr. Robert Scott. Olivia currently teaches yoga for Carlisle, Indianola and Norwalk Fire Departments, Des Moines Veterans Association, Iowa Army National Guard, and the Des Moines Police Academy. Olivia is a staff writer and former assistant editor of LA Yoga Magazine. Her writing for other yoga publications and blogs includes the inaugural issue of Yoga Iowa, with her article on the benefits of yoga in the military being the cover story. Olivia is a member of the International Law Enforcement Educators and Trainers Association (ILEETA).