Threats to American security continue to proliferate and evolve. A significant rise in homegrown extremists and domestic terrorist acts means there must be a paradigm shift in how state, local and tribal law enforcement agencies assist in countering such threats to our communities.

[Related: The Role of Local Police in the War Against Terrorism]

The first, most critical step is to improve communication and information sharing. The current system established by the federal government to share information has not been enough.  After the 9/11 attacks, the government took steps to improve information sharing among local and state law enforcement agencies. It established the Department of Homeland Security (DHS), created fusion centers, and expanded the FBI’s Joint Terrorism Task Forces. While these were all steps in the right direction, it hasn’t been as effective as hoped and more must be done.

Reaching a better solution is complex and would involve strategizing on the national and state levels, creating additional legislation, and enhancing policing policies across the country. This means local law enforcement must be more involved to help counter evolving threats. To do so, police agencies must receive training on counterintelligence techniques and tactics so our nation’s police officers have the capabilities to recognize and respond to terrorist threats.

Counterintelligence (CI) is a diverse offensive and defensive intelligence discipline used throughout history by nation-states to improve diplomatic advantage, shape wars, prevent wars, and monitor friends and foes. In simple terms, CI works against an adversary’s intelligence operations. In the federal security enterprise, which includes the CIA, FBI and DEA among others, CI is used to counter foreign nations’ and terrorist organizations’ intelligence activities directed at the U.S.

One of the major benefits of the CI discipline is that it is scalable depending on the target. For example, it can be employed against sophisticated foreign intelligence services, such as the Iranian Ministry of Intelligence and Security (MOIS), or it can be used to target haphazard intelligence activities conducted by untrained street gangs.

The Cold War greatly shaped how the U.S. uses CI techniques against spies and terrorist activities. However, the threats have changed. Today, domestic and foreign terrorists, transnational organized criminal enterprises, and U.S.-based criminal enterprises have established strategic alliances to traffic humans, drugs, weapons and contraband into the U.S. Independently, these organizations are a serious threat. Collectively, when these threats converge, their abilities are even greater as they are able to draw lessons from one another and leverage each other’s capabilities to evade detection.

That’s why it’s more important than ever for CI techniques to be used by all levels of law enforcement and not just federal agencies. Such a paradigm shift would provide an opportunity for local and state agencies to help disrupt and degrade the operating environment for such adversaries.

How to Integrate CI into Law Enforcement Agencies

To enhance CI at the state and local level, local law enforcement agencies should have their own training academies and curriculum modeled after the federal CI enterprise training.  This allows local law enforcement the opportunity to tailor and teach their own CI programs to meet their specific local requirements. As one of their primary duties, trained CI officers would be responsible for collecting threat information and sharing it with analysts for retention and dissemination at the appropriate federal enterprise. CI officers in different agencies would also collaborate with one another to identify emerging and critical threats within a geographical area.

As new threats continue to emerge, it is more important than ever that all levels of law enforcement learn to work together. Training officers in counterintelligence tactics is an effective way to initiate a comprehensive strategy to detect, identify, and deter the adversaries who threaten our nation’s security.

*This article is based on a presentation that Chris Brewer delivered during the Pacific Northwest Political Science Conference in Portland, Oregon on November 11. Chris was one of five American Military University students who were selected to present their research at the conference. 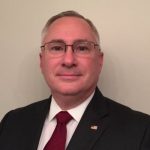 About the Author: Chris Brewer received a master’s degree in National Security Studies, Homeland Security (with honors) from American Military University. He is a full-spectrum Counterintelligence Officer and national security practitioner with more than two decades of military service and counterintelligence experience. After retiring with 25 years in the Army, Chris founded Bluestone Enterprises with a vision to integrate the counterintelligence discipline into homeland and corporate security enterprises.