This week in 2003, the British Mars lander Beagle 2 was launched as part of the European Space Agency’s (ESA) Mars Express mission. Beagle 2 was an astrobiology mission that would have looked for past life on the surface of the Red Planet.

After six months of travel time, the Beagle 2 was successfully detached from Mars Express on December 19, 2003, and was scheduled to land on the surface of Mars on December 25.

However, after the expected landing time came and went, no contact was established between the ESA and Beagle 2. Numerous unsuccessful attempts to contact the lander were made and Beagle 2 was declared officially lost by ESA in February of 2004.

The lander, Beagle 2, unfortunately did not fully deploy after landing on Mars. But the Mars Express Orbiter is still operational today and it continues to map the surface of the planet.

Beagle 2’s companion, the Mars Express Orbiter, is still operational today and continues to provide valuable science for ESA. But Beagle 2’s status remained a mystery for over a decade.

Then, in January of 2015, more than 11 years after its loss, the missing spacecraft was located by NASA’s Mars Reconnaissance Orbiter about five km from the center of its planned landing zone.

According to Rudolf Schmidt, ESA’s Mars Express project manager at the time, “Not knowing what happened to Beagle-2 remained a nagging worry. Understanding now that Beagle-2 made it all the way down to the surface is excellent news.” 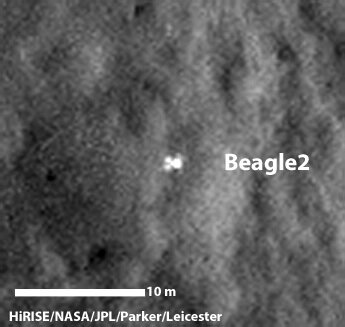 Close-up of Beagle 2 on Mars. HiRISE/NASA/JPL/Parker/Leicester

Given that the Beagle 2 was small, only two meters in diameter when fully deployed, its discovery by NASA was a small miracle. Its diminutive size is right at the resolution limit of the cameras in orbit around Mars.

Perhaps future human explorers to the Red Planet will stumble upon Beagle 2 and solve the mystery of why the spacecraft went dark after its deployment from Mars Express.