Lincoln Kaffenberger was stationed in Afghanistan while earning part of his master’s degree in Intelligence Studies from American Military University. During his deployment, Lincoln quickly discovered that the work he was doing in his classes helped with the products he generated as an intelligence analyst.

“I think the intelligence community is similar to the academic community in many ways,” said Lincoln. “Both require their people to use sound analytical processes to reach their conclusions and to display their sources and processes in such a way that others can see how they arrived at that conclusion.” 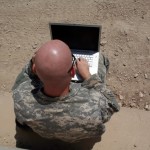 Simple things, like always citing sources and looking at the format of a product to make sure it was produced in a standard format, were things that he learned in school and applied directly to his job.

The strategies and theories he learned in classes could also be directly applied to his job. For example, one of his textbooks was The Thinker’s Tool Kit: 14 Powerful Techniques for Problem Solving. This book included a lot of practical analytical techniques that helped guide students through the brainstorming process and taught them more about probability.

“When my boss came to me and said, ‘hey this last operation we didn’t find as many targets as we did in our first operation. Why not? What will that mean for our next operation?’ I could come up with answers and analyze why the second operation was so different than the first and help figure out what the enemy was going to do next,” said Lincoln.

The Value of Open-Source Information
As a result of his coursework, Lincoln also learned that open-source information provides a wealth of information.

“There is bias in the intelligence community that unless it’s classified, it’s not intelligence and it’s not as good or the information is not as credible,” said Lincoln.

Through his AMU courses, he discovered that there is a lot of great information to be found in the unclassified realm. “The reality is that more than 90 percent of information is unclassified or available through open sources. Too many analysts hold the bias that unless it’s classified it’s no good,” he said.

“Courses through AMU forced me to find these sources and allowed me to broaden my horizon about what is available as open source and now I really appreciate and respect that. There’s so much good information out there.”

Tips for Deployed Students
Lincoln graduated from AMU in 2012 and now works in Washington, D.C., as the officer in charge of analysis and production section, working for Global Operations Center – SIGINT. His team is tasked with taking raw information, analyzing it, and then using it to answer questions for deployed soldiers as well as provide information to decision makers in the U.S. Army.

Looking back on his experience, Lincoln offered some advice to other military personnel who are considering starting their education while deployed: