When people think of terrorism, many immediately think of international terrorism or even radical Islamic terrorism. However, many people forget that there are homegrown terrorists right in our own backyards that are not Islamic-based.

[Related: How Officers Can Thwart Radicalization in Prisons]

Working in a correctional facility, officers see the worst society has to offer. Prisons enable the worst of the worst prisoners to network together, explore other ways of thinking, and share terroristic ideologies. There are many ways staff can intervene if they know what to look for. Here are some examples of threatening groups and indicators that an inmate may have embraced extreme ideology.

White supremacy is a blanket term used because there are so many white hate groups including the Ku Klux Klan, Aryan Brotherhood, Skin Heads, and Nazi Low Riders. These groups hold very similar beliefs that white people are superior to people of other races and nationalities with a darker skin color. “White Nationalists seek to return to an America that predates the implementation of the Civil Rights Act of 1964 and the Immigration and Nationality Act of 1965. Both landmark pieces of legislation are cited as the harbingers of white dispossession and so-called ‘white genocide’ — the idea that whites in the United States are being systematically replaced and destroyed,” according to the Southern Poverty Law Center.

Some white supremacy groups try and cover their activities under legitimate religious beliefs. Odinism, or the pagan beliefs of the Norse Gods, is a legitimate religion and white hate groups have adopted some of the symbolism such as Thor’s hammer, the Death Rune, the Norse Rune and Celtic/Odin’s Cross. They have taken legitimate symbols from other religions as well, such as the cross from Christianity.

From my experience, white supremacists will often hold their clandestine meetings in prisons under the cover of a legitimate religious service. It should be very clear that stopping religious services is not necessarily the right thing for corrections staff to do. Rather, a member of the clergy staff who is well educated in many religious ideologies should attend to help decipher what is legitimate and what is a hate group meeting.

The term sovereign citizen is used broadly to describe individuals who have anti-government beliefs. The core beliefs of sovereign citizens are that “the government operates outside of its jurisdiction. Because of this belief, they do not recognize federal, state, or local laws, policies, or regulations,” according to the FBI. While their crimes are often seen as petty—they’re sometimes referred to as “paper terrorists” because they file large amounts of false documents and/or unfounded lawsuits. While this group is typically not violent in their methods, it doesn’t mean that they can’t be. There have been documented incidents of violence with sovereign citizens in a prison setting. Violence typically occurs when rules and regulations are enforced, which sovereign citizens believe they don’t have to follow.

[Related: Signs of Sovereign Citizens and How Officers Should Respond]

One of the most common threats by sovereign citizens is their use of legitimate paperwork to start false litigation on corrections staff using the “Strawman/Redemption Theory.” This theory is a scheme aimed to try and defraud the United States Treasury based on their beliefs that the U.S. government controls the entire banking system. Sovereign citizens also use Uniform Commercial Code (UCC) forms, which are absolutely legitimate forms used for commercial businesses to copyright or legitimize their businesses. The overall goal of the UCC, for legitimate reasons, is to make doing business easier, especially over state lines. However, sovereign citizens attempt to file these forms for illegitimate reasons.

Sovereign citizens regularly create their own license plates and identification cards; they may even have a world passport. They often use all capital letters on envelopes and also the little copyright symbol “©” next to their name. Identifying a sovereign citizen in prison is often not that difficult because they openly discuss their beliefs. Some even hold workshops to inform other inmates of their movement, typically in the law library of the facility. Law library staff should be on the lookout for such individuals and learn more about this radical group of individuals.

The definition according to Webster-Merriman of anarchism is “a political theory holding all forms of governmental authority to be unnecessary and undesirable and advocating a society based on voluntary cooperation and free association of individuals and groups.”

What makes anarchists different from sovereign citizens is that anarchists tend to be more violent in their activities. Sovereign citizens will promote frivolous lawsuits and use the court system in an effort to manipulate it, whereas anarchists will be outright hostile and violent towards authority. They tend to show up when there is a large scale summit such as the G20. “They usually target symbols of Western civilization that they perceive to be the root causes of all societal ills—i.e., financial corporations, government institutions, multinational companies, and law enforcement agencies. They damage and vandalize property, riot, set fires, and perpetrate small-scale bombings. Law enforcement is also concerned about anarchist extremists who may be willing to use improvised explosives devices or improvised incendiary device,” according to the FBI.

Anarchists in prisons tend to be rather overt in their actions because they don’t have the cover of religion. This means they typically meet in the yards where they usually discuss various forms of politics. In my experience, anarchists do not necessarily understand the true meaning of anarchism and communism. 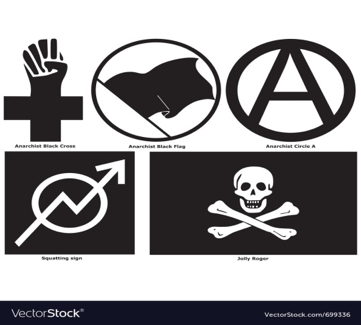 Nevertheless, their focus is on taking steps that tend to be violent to try and overthrow authority. They typically will not be cooperative with “the man” or authority figures and many will try the political-prisoner angle when dealing with correctional staff. When law enforcement on the street sends them to prisons, those same concerns of violence and tactics used outside follow them inside. They may read literature such as the Anarchist Cookbook and sabotage manuals. Some also use the symbol of an encircled “A” and the black flag (see left).

Though Juggalos are not necessarily a terror group and are more gang-like, I thought they should be noted. Juggalos, or Juggalettes for females, are a loosely organized hybrid gang based on the musical group ICP or Insane Clown Posse. “Most crimes committed by Juggalos are sporadic, disorganized, individualistic, and often involve simple assault, personal drug use and possession, petty theft, and vandalism. However, open source reporting suggests that a small number of Juggalos are forming more organized subsets and engaging in more gang-like criminal activity, such as felony assaults, thefts, robberies, and drug sales. Social networking websites are a popular conveyance for Juggalo sub-culture to communicate and expand,” according to the FBI.

While I do not intend to blame music for the actions of Juggalos, they tend to use the symbolism of the musical group in a criminal manner. They also drink Faygo brand soda pretty exclusively because this is what is sprayed on the crowd at ICP concerts. They also embrace icons of the group, particularly the image of the hatchet man/girl as seen below. 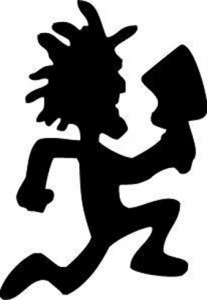 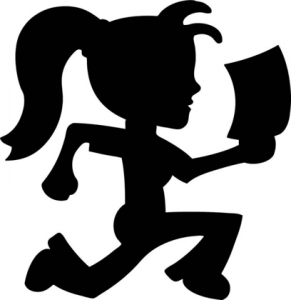 What to Do When You Recognize Signs of Radicalism

Corrections officers must be aware of many different terrorist and extremist groups within prisons. What’s discussed above only scratches the surface of what is happening inside prisons. This is a lot for a newer officer to take in, especially those who work in smaller or lower security facilities that may not see a wide variety of inmates.

Officers should maintain a list of inmates who are in a particular group and those who interact with them. This will help identify who the members are and how these groups recruit in prisons. This list should be held in strict confidence among a select group of staff who are trained in gang and/or terrorism recognition. These staff members need to have the authority and training to investigate any developments by identified inmates and take necessary steps to help curb the growth of these groups.

If officers have a question about suspicious literature or contraband, they should ask the inmate about it. I’ve found that often times he or she will tell the truth about the material. If the story sounds slightly off, officers can confiscate the material and report it to more experienced staff or a supervisor. The worst that can happen is that officers have to return the material to the inmate.

If officers do find contraband that shows some domestic terror activity, that information should be included in the institution’s monitoring and reporting system. If such a system does not exist within the institution, one should be created for staff to report such suspicious activity. Efforts should also be made to stop communication regarding terror activities between inmates and individuals outside of prisons. To help these efforts, liaison officers should be appointed to work with local, state and federal officials, the county district attorney’s office, and other legal services within the agency. Correctional officers play an important role in identifying and stopping the spread of radical beliefs within the institution.

About the Author: Jason Whitehead has served as an officer with the New York State Department of Corrections and Community Supervision since 2005. He has also been an Adjunct Professor in Criminal Justice at Morrisville State College since 2016. He has a Master’s of Intelligence Studies with a Concentration in Criminal Intelligence from American Military University. He also has a Bachelor’s of Technology in Criminal Justice from Morrisville State College and an Associate’s Degree in Criminal Justice from Onondaga Community College. To contact him, email IPSauthor@apus.edu. For more articles featuring insight from industry experts, subscribe to In Public Safety’s bi-monthly newsletter.