Human Trafficking Thrives Because Officers Don’t Know What It Is

Human trafficking often thrives right under the noses of law enforcement and corrections officers, simply because these officers do not know enough to recognize the signs of human trafficking. For example, sex traffickers have found multiple ways to recruit women who are currently serving time in prison.

In the last three years, I have been deeply involved in building human trafficking awareness and education. My focus has been to train law enforcement and corrections officers in jails and prisons how to recognize, identify, and assist victims.

One of the major obstacles for proper training is a misconception that human trafficking is a big-city problem or an international issue. I recently met a police officer who worked in a small, affluent town in Florida who told me he had requested to attend training on trafficking, but his chief refused saying, “We don’t have that crime in this town.”

In lieu of formal training, I directed that officer to several articles on human trafficking so he could educate himself. Not long after providing him with information, he called to tell me there was a suspected victim of sex trafficking in the emergency room of their local hospital.

This police officer’s experience is probably being repeated in communities all across the country—victims are missed until there is awareness among local law enforcement officers. A major step in combating human trafficking is to educate officers about what human trafficking is, what signs to look for, and how to report it.

What Is Human Trafficking?
According to the Trafficking Victims Protection Act of 2000 (TVPA), there are two main types of human trafficking:

In the TVPA, the term “commercial sex act” means any sex act on account of which anything of value is given to or received by any person.

Calls and Arrest Histories that May Indicate Human Trafficking
Sex trafficking victims have often been brainwashed by their captors and are very distrustful of law enforcement. Therefore, officers must know the signs and indicators of victims.

Challenges to Reporting Human Trafficking
Once you recognize a potential case of human trafficking, you must then report it. I know firsthand the difficulties involved in enforcing human trafficking laws. Trying to report trafficking can be a frustrating process because of the lack of a clear reporting structure and lack of training, especially in the corrections setting.

For instance, a couple of years ago, I tried to report a suspected victim of sex trafficking. I called the agency in the jurisdiction where the crime had occurred and when I spoke to the detective assigned to handle those types of crimes, the conversation went like this:

His attitude about the seriousness of this crime quickly diminished. This detective acted quite unconcerned and seemed to imply that this woman was likely a hooker and liked what she did.

I was not surprised by this detective’s response. I have encountered this situation several times. When I try to report a case of suspected human trafficking, I am often met with indifference or barriers.

While the National Human Trafficking Resource Hotline (1-888-373-7888) is a great resource for reporting suspected trafficking victims, it is imperative that agencies build a better internal reporting structure. Human trafficking involves a web of perpetrators, and victims and agencies need to take it upon themselves to investigate these networks.

Victims of sex or labor trafficking rarely self-identify themselves as victims when they come into contact with law enforcement and other social-service agencies. There are many reasons for this. Many victims are are taught to distrust law enforcement and are coached about what to say to police. There are threats that they may be deported or their families will be harmed if they say anything. This makes training for law enforcement all the more important. 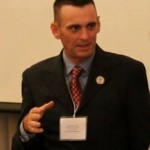 About the Author: John Meekins graduated from the Wharton School of the University of Pennsylvania. He is a member of the International Association of Human Trafficking Investigators and an Ambassador of Hope for Shared Hope International. Meekins has almost 10 years working with female inmates in one of the largest female prisons in the nation.