From Officer to Author: Advice for Becoming a Writer

Crime novels remain one of the most popular genres of books and who is more qualified to write one than a police officer? Like many officers, Bob Martin, who retired from the NYPD as a Deputy Inspector after 32 years, thought about writing a book using his vast knowledge accumulated after years of investigating crimes. But it wasn’t until he decided to pursue an education that the thought became a reality.

“I went back to school late in life—I went to college in my 40s—and took a course on NYPD history,” he said. His professor commended him on his writing style and intriguing subject matter and suggested he try to get his papers published. “That put the bug in my head that maybe I did have some talent for writing,” he said.

[Related: Secrets for Success in College and Beyond]

It wasn’t the first time he had been praised for his writing skills. As all officers know, a significant part of the job is being able to write accurate and descriptive reports detailing an incident. Throughout his more than three decades in law enforcement, commanding officers would regularly request that Martin be the one to write the report. “I took pride in that,” he said.

After he retired in 2000, he decided to take his writing to the next level and wrote a novel. In December of 2016 he published a fictional crime action novel, Bronx Justice.

[Related: Tips for Planning Your Retirement]

But the process of writing a book “was the hardest thing I’ve ever done,” Martin confessed. He worked on it sporadically for about 10 years before realizing, by accident, that what he needed was the support of other writers. “I was very lucky that I ran into a guy who turned out to be a New York Times best-selling author, Vincent Lardo. He took me under his wing and got me involved in a writer’s workshop that really improved my writing,” he said.

Workshop members not only provided critiques of his writing, they gave Martin what he had been missing: deadlines. The workshop required each member to submit 12 new pages to the group ahead of each meeting. This gave him a defined goal each month and forced him to sit down and write.

Being critiqued initially took a toll on his confidence as a writer. “It was pretty brutal and I remember the first night driving home and thinking ‘I’m not going back,’ but then when I sat down and thought about what they said, I realized they were right. Still, it took me five or six more years to finish my book, but they really helped me do it,” he said.

So You Want to Be a Writer?

For other officers considering putting their experience into words, Martin has some advice.

“If you want to be a writer, be friends and hang out with writers. They will encourage you,” he said. Not only can they provide feedback about your storyline, writing style, and other elements of your book, they can connect you with editors and publishing houses. Such insight and connections can be invaluable to get your book completed and published. Martin suggests looking for writing groups at local colleges and adult-education programs. He also belongs to the Public Service Writers Association, which specifically caters to writers with public safety backgrounds.

Write What You Know

Police officers have unique perspectives on the justice system that other writers don’t. Use that experience to your advantage, said Martin. Bronx Justice borrows from Martin’s experiences in the NYPD and while the book is 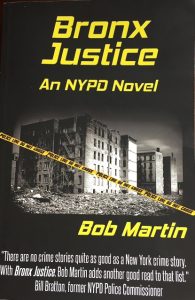 fictional, he used experiences from numerous cases and investigations as the foundation of his story.

Force Yourself to Sit Down and Write

Self-discipline is the key to writing. Fortunately, Martin found a writing group that forced a deadline on him, but for 10 years he struggled to write consistently. “There was no one calling me up and asking me to please finish it. I would always intend to write on the weekends, but then I would find an excuse like the Giants were playing that day,” he said. Establishing a writing schedule and sticking to it is critical to finding a rhythm in your writing and getting those pages completed.

“When I look back on my first draft, it was horrible, absolutely horrible,” he said. But with the encouragement and guidance of other writers coupled with persistence and dedication, it is achievable. Don’t let yourself—or the feedback from others—convince you to stop writing. Like any other skill, writing takes a lot of practice and requires multiple drafts and revisions. Stick with it and remain confident in your ability and talent as a writer. “Remember, it’s definitely a marathon not a sprint,” said Martin.

So will there be a sequel to Bronx Justice? “I’m not sure if I have it in me to write another full-length novel,” Martin said. “I left the ending of the book open, just in case, but I was so happy when I finally finished it and got it published. I remember that first Sunday after it was published when there was a Giants game on and it was the first time in 10 years that I sat down and didn’t have a guilty conscious for watching the game instead of working on the book.”

Nevertheless, Martin might have a few short stories up his sleeve and definitely plans on publishing newspaper and magazine articles in the near future. Whether it’s as a writer, a professor, or a different career, Martin encourages police officers to approach retirement as an opportunity to leverage their law enforcement experience in new ways.

Artemis I and the Need for Additional Space Legislation