For National Preparedness Month, I Actually Got Prepared

I’ve had some significant changes in my education choices lately: I’ve decided to pursue a Master’s Degree in Emergency and Disaster Management. It’s a subject I’ve long been fascinated by and something I’ve (apparently) been talking about for a few years now. When I told a good friend of mine I finally signed up for classes, she laughed at me and told me it was about time. When I asked her what she meant by that, she recalled a conversation we had had on the subject of emergency management more than a year ago. Apparently, this is something that’s been floating around in my brain for a while and I’m just now making it happen.

I’ve been involved in fields with ties to emergency management for several years now. As the former editor of Security Director News, I spent four years talking to security practitioners and writing articles about security best practices, which partially involves emergency preparedness and business continuity issues. I think the turning point for me mentally was during the 2010 earthquakes that struck Haiti. I remember wishing I could do something more than send money via texts to the Red Cross. I was extremely fascinated by the logistical planning involved in getting relief efforts to Haiti and I remember wondering who it was that was figuring out how to get large equipment, medical supplies and personnel to Haiti.

It took me more than two years to actually start that effort. I’m not going to pretend I know much more about emergency management than I did then. My first class, Emergency and Disaster Theory, starts next week. I’m very anxious to start the program and learn more about how this field has developed through the years and some of today’s best practices. I’ve followed Craig Fugate’s career as the administrator of FEMA and I find it encouraging that someone of fairly humble beginnings, as a volunteer firefighter and later the Director of the Florida Division of Emergency Management, has risen to such an influential position. I like his realistic approach to FEMA and not too long ago I wrote a blog based on a speech he gave about how the agency is using social media. My favorite part of that speech was when he talked about why it’s so important that FEMA and other response agencies not wait for precise information about a disaster and make efforts to get into the disaster area immediately. 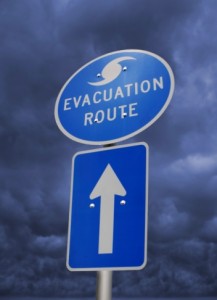 As many of you probably know, FEMA has designated September as National Preparedness Month. It’s the time when the government asks citizens to prepare themselves for an emergency. It may or may not sound strange to you that I often run scenarios through my head to test myself for an emergency. For example, when I’m in a restaurant, I will often ask myself where the nearest exit is. My grandfather, who was a career firefighter, was the one who instilled this habit in me (Hint: there’s always an exit through the kitchen). As a continuation to this game, I often run scenarios through my head about what I would do if I had to evacuate right now. What would I take with me? I’ve run the list through my mind, but one night last week it occurred to me that I would likely not have time (or a clear mind) to actually put together what I would need if I had to evacuate. So, I put together a bag.

I actually did it.

I used an old hiking bag that I hardly use any more (but is still good) and I was amazed by how many supplies I already had in my house (that I wouldn’t miss in every day usage). In my bag I included a change of clothes, warm clothes, medical supplies, food, flashlights, batteries, cash, a portable radio (which cellphone charging capability), and much more. I’m sure there’s still more things I should include and several things I will need to remember to grab (like my passport and other important documents) if I ever really need to evacuate. But I can’t tell you how much better I feel every time I see that bag sitting in the back of my closet, knowing that if something happens, it contains (nearly) everything I need to survive (for a few days at least). It’s very comforting. I highly recommend it.