On February 12, more than 180,000 people in Oroville, California were evacuated for fear a dam on Lake Oroville was in danger of collapsing. That day, officials noticed severe erosion on an emergency spillway. If that structure were to fail, it would send a 30-foot wall of water rushing into the communities downstream. 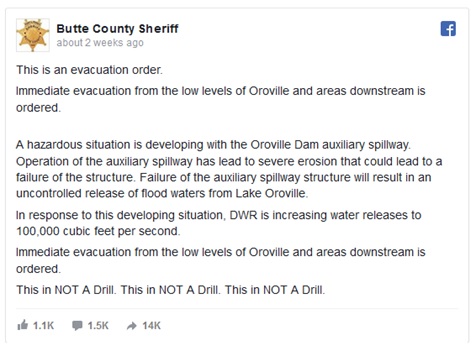 Residents had no warning ahead of the evacuation order and were forced to immediately leave their homes. They were evacuated to eight locations, including the Silver Dollar Fairgrounds in the neighboring town of Chico.

Maggie Buckenmayer, a public affairs manager with the American Red Cross (ARC), was deployed to the Chico evacuation site 24 hours after the mandatory evacuation order. “The Red Cross was able to open this shelter within four hours of the evacuation notice,” she said during a phone interview from Chico.

The Chico evacuation location had about 2,000 residents waiting to learn if the spillway would collapse before officials could reduce the amount of water in the lake. “The fear here is real and for these evacuees the danger still exists even though they are safe at the shelter,” she said. The inability to communicate caused a lot of anxiety for residents. “These evacuees only had minutes to leave so many didn’t have their phones and didn’t have a source of communication,” she said.

The ARC relies on many partners in the public and private sectors to provide evacuees with necessities like food, cots, blankets, and toiletries. One of the ARC’s public-sector partners, Verizon Wireless, brought in a mobile cell tower with streaming surveillance equipment to assist responders monitor the dam deterioration. It also included a media center that had a large-screen TV mounted on the exterior so residents could watch the news and get updates about the condition of the dam. In addition, Verizon set up a Wireless Emergency Communications Center with computers and cell phones so residents could notify loved ones that they were safe.

Providing equipment to the emergency responders in Oroville was part of Verizon’s Crisis Response Team (V-CRT) program. The company has 45 crisis-management teams that are constantly monitoring conditions around the country, in addition to their two network operations centers that constantly monitor Verizon’s entire network. “These assets allow us to monitor and quickly respond to disasters around the country,” said Todd Biebel, manager of business continuity and disaster recovery at Verizon Wireless.

During an emergency, the company deploys its equipment and personnel to the community in need. “When there’s an event and someone needs our resources, we are there for our communities providing the communications services they need when they need it most,” Biebel said. “This is really about being a solid community partner and a strong corporate citizen – we’re the largest carrier in the country and we feel we have a responsibility to help.”

Providing communication resources to residents of Oroville helped alleviate some of the stress during this disaster, confirmed Buckenmayer. “Being able to watch TV and see updates was like a security blanket for them. One of the hardest things in sheltering the community was the anxiety, and Verizon helped ease a lot of that,” she said.

On February 14, the evacuation order in Oroville went from mandatory to a warning. Buckenmayer reported that about two-thirds of the people at the fairgrounds returned to their homes, but one-third remained out of fear they would be evacuated again if the situation changed with the dam. “Even though many people are returning to their homes, I heard many say they were anxious and would always look up at the dam and wonder if they were safe or not,” she said. Water officials confirmed they were able to drain enough water out of the lake so that the damaged spillway was not needed to handle excess water runoff.