Technology has completely reinvented law enforcement. It has been an enormous challenge for law enforcement agencies to learn how to use and integrate technology, develop appropriate policies, and figure out how to protect data and information, said D.C. Chief of Police Cathy Lanier during an informative and often humorous keynote speech at the Global Intelligence Forum on July 30 in Washington, D.C. 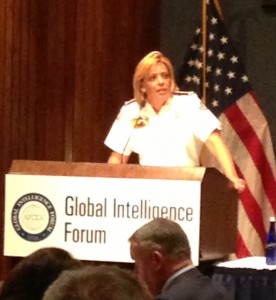 “To say policing has changed dramatically is an understatement,” she said. Technology has been the biggest cause of this change. For example, in 2007 when Lanier became police chief, officers were still handwriting reports and using pagers. Email was hardly used within the department. Today, the department is one of the tech-savviest police agenices in the United States. “And that’s the downside,” said Lanier, causing laughter throughout the audience.

The department has embraced technology such as license plate readers (LPR), automated traffic enforcement, CCTV systems (both public and private), gunshot detection technology—just to name a few. They also use online crime reporting analytic tools to predict crime patterns and social media platforms for internal and external communication. Police carry mobile devices and have them in their vehicles.

While these technologies have contributed enormously to solving crimes and helping further protect the public, the learning curve has been very steep, Lanier said. “I have 5,000 employees who have gone from having everything manual to having everything available on mobile devices,” she said. “How do you bring employees to that level? Plus, everyone is watching CSI and that’s not helping me at all.”

Re-educating her workforce about how to use these systems and, perhaps more importantly, how to keep them secured has been one of her biggest challenges. “Cybersecurity is dependent on the person first, and there’s been some tough lessons learned as we have infused technology [into the department],” said Lanier.

But being tech-savvy is a requirement in this day-and-age of policing, and it has brought about an entirely different type of police investigation.

“Street criminals are using technology more efficiently than we are,” said Lanier. While officers previously checked pawn shops after a robbery, they now check Craigslist and other virtual vendors in their attempts to recover stolen items. “The role of the police detective has changed dramatically,” she said. “We’ve had to change who we are hiring and their background.”

Keeping up with technology, integrating systems with each other, and educating police officers about how to effectively and efficiently use this technology continues to be an enormous challenge for police departments around the country.

“It has been a huge transition, and it almost feels like we’re reinventing police work,” said Lanier.