Boots in the Air: The Role of Airline Personnel in the Fight Against Human Trafficking

During Together Let’s Stop Traffick, an international summit about global efforts to combat human trafficking held on the campus of American Military University in Charles Town, W. Va., more than 120 attendees learned that education and awareness in the transportation industry is vital to the fight against trafficking. Victims are often moved to avoid detection by law enforcement, often using the same public transportation options as holiday travelers. 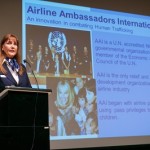 Rivard founded AAI in 1996. Since correctly identifying human trafficking on four flights in 2009, AAI has spearheaded industry awareness on the issue. The non-profit has worked closely with US Customs and Border Protection (CBP) to develop an industry specific training consistent with the Department of Homeland Security’s Blue Campaign.

In 2011, AAI began a new training initiative and has since provided 24 trainings to 2,000 individuals at airports across the United States as well as in Kiev, Ukraine, the first training of its kind in Europe.

As part of its “boots in the air” training, AAI recommends that flight crews be observant of passengers, especially children and young women traveling alone. They encourage crews to initiate conversations to assess the situation, but not to act overly concerned or do anything that may endanger themselves. If attendants believe there may be a trafficking situation onboard, they should notify the pilot, report the seat number, and follow CBP’s Blue Lightning protocol.

While this training program has proven to be successful, there is very little support from the major airlines and human trafficking is not highlighted in the emergency training for any airline in the US.

“Airlines are nervous because they don’t want their brands associated with anything negative,” said Rivard. “They are also afraid that flight attendants will profile passengers and will end up in a lawsuit. But, we must convince airlines that training their personnel about human trafficking is the socially responsible thing to do.”

To help do so, AAI has launched a petition to encourage all airlines to train staff members to recognize and report suspected human-trafficking offenses.