In a recent Daily Beast article, “Exclusive: 50 Spies Say ISIS Intelligence Was Cooked,” Shane Harris* and Nancy Yousef describe a situation that is all too common in the intelligence community: Different assessments conflict or disagree with one another.

While their story deals specifically with a problem occurring in U.S. Central Command (USCENTCOM), the problem of conflicting intelligence assessments happens to every analyst several times throughout a career. The causes may seem unavoidable, but there are remedies to reduce their chances and ways to deal with them when they occur.

Conflicting intelligence estimates show up both internally and externally.

[Related Article: The 4 Core Abilities Needed for a Career in Intelligence] 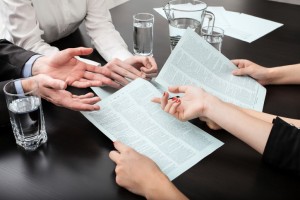 Externally, conflicting assessments can come up between an intelligence analyst and a customer who has made up its mind about a given situation. While the primary job of intelligence is to provide information to the customer as a decision maker, this relationship is often hampered by rank and seniority as well as a lack of communication and trust between the two.

Intelligence analysts will routinely find themselves providing information to someone much senior to them such as a combat commander, police chief, senior investigator, or the president of a company. These decision makers combine intelligence assessments with their own sources of information and experience. If their own opinions conflict with what the more junior intelligence analysts find, these leaders must either disregard that intelligence or force the analysts to argue or articulate their position more effectively.

Additionally, decision makers themselves may have been given information or guidance from an even higher authority that forces them toward a particular line of thinking. Unfortunately, this guidance could be politically driven and therefore motivated by a different set of factors than what analysts take into account.

While there are many specific situations in which intel assessments can conflict with each other, the key to minimizing this problem is to understand the common sources of disagreement and to attack these sources directly.

Good Assessments Rely on Trust
Like all forms of effective communication, the relationship between intelligence analysts and their customers are based on an established level of trust. The customer—be they the decision maker or another analyst—must trust that the analyst making a particular assessment is competent, articulate, and honest. They must trust that intel analysts understand the situation and their job. They must also trust that analysts have an innate ability to communicate verbally and in writing, and have taken steps to eliminate their own bias or agendas from an assessment.

If any of these types of trust are lacking or absent, the integrity of assessments can be compromised. When decision makers tend to rely on their own insights and experience or other sources of intel over the assessment, that indicates that there is a problem in the analyst–customer relationship.

As intel professionals, we must continually overcome this hurdle of trust with every new customer. I once had a brigade commander who, upon our first meeting, proclaimed that he himself was the best intelligence officer in the brigade. He may as well have declared that he was never going to trust the assessments of his own intel officers. Fortunately, I was the incoming intel officer (or S2) for a battalion commander in his brigade at the time and not on his staff. As every decision maker weighs the intel assessment provided, he or she will also evaluate the analyst for competence, articulation, and honesty.

For conflicting assessments that occur internally, trust is still the basic issue. If your assessment disagrees with another one up the chain, it can be commonly perceived as a challenge to the competency of the author of the other assessment. Personality and social factors can contribute to the situation here as well. While it’s important to work through disagreements, simply following the rule that the higher-level assessment is correct will almost guarantee failure.

Each of these techniques is used to challenge the current line of thinking or produce alternate analyses with proper backing of the results. Each of these also requires the commitment of resources, time, and personnel that may or may not be available depending on the organization and situation. After learning the academic version of these techniques (taught in courses INTL401: Critical Analysis and INTL402: Intelligence Analysis), your challenge is to adapt these techniques to your situation and incorporate them into your operations given your level of resources and time available.

Wargaming is another way to reduce conflict in analysis primarily because it involves both the decision maker and the analyst, with the analyst taking the position of the adversary. Want to gain the confidence of your commander? Be a challenge for them in a wargaming session. As one great commander once told me, you’re never allowed to win, but you better make it a challenge for them to beat you.

A final way to reduce conflicting assessments is through training and education of intel professionals. Even the most seasoned intel analysts can stand for a brush-up in analytical techniques, critical thinking, and briefing and presentation skills. Keeping yourself and the analysts you work with trained and always seeking educational opportunities will allow them to more easily gain and maintain the trust of the decision maker whom they are supporting.

*Full Disclosure: I’ve worked with Shane Harris extensively on his first book, The Watchers, and consider him a friend of mine.