The COVID-19 pandemic has changed the way people live, work and socialize – but what if the coronavirus had hit 40 years ago?

Currently, many jurisdictions in the United States have outlawed all public gatherings of 10 or more people and have asked everyone to practice social distancing. Most states have also closed non-essential businesses and enforced rules mandating working from home where applicable. At the federal government level, President Donald Trump recently extended the national social-distancing guidelines to April 30.

Luckily, in our digital world, there are numerous technological gizmos on hand to help businesses, schools and families get through a period of time when staying away from coworkers, friends and even family members is the new normal.

Today, most people can immediately contact loved ones via email, texts, video calls, social media and instant messages. Most people also have instant access to tens of thousands of news sources – online and streaming. We can see real-time statistics related to COVID-19, and we can choose which news outlets to patronize and which ones to avoid. We can read thousands of online articles about COVID-19 including its symptoms, how it’s spread, its mortality rate, its prevalence, its trends, the nations most affected – the list goes on.

During our current “stay-at-home” or “social distancing” time, most of us can surf the internet, download a new ebook to read on our tablets or e-readers – or we can stream and binge-watch one of virtually millions of shows and movies to our living rooms via Netflix, Amazon Prime, Hulu and similar on-demand providers.

Those lucky enough to do so can work from home and conduct face-to-face meetings via Skype, Zoom, and other video-conferencing software. We can send an email to a colleague whom we might usually communicate with in person.

Most children and teens have video game consoles, smartphones, tablets, and other handy devices to turn to.

However, let’s rewind to March 1980. What would we have all done if the deadly novel coronavirus – along with all of the restrictions and life-changing measures we’re facing today – had arrived in the U.S. 40 years ago?

A stay-at-home order would have had some major setbacks for everyone in 1980 – especially businesses. To illustrate, this chart from Our World in Data shows how the most popular technologies we use today at work and at home were non-existent in 1980. 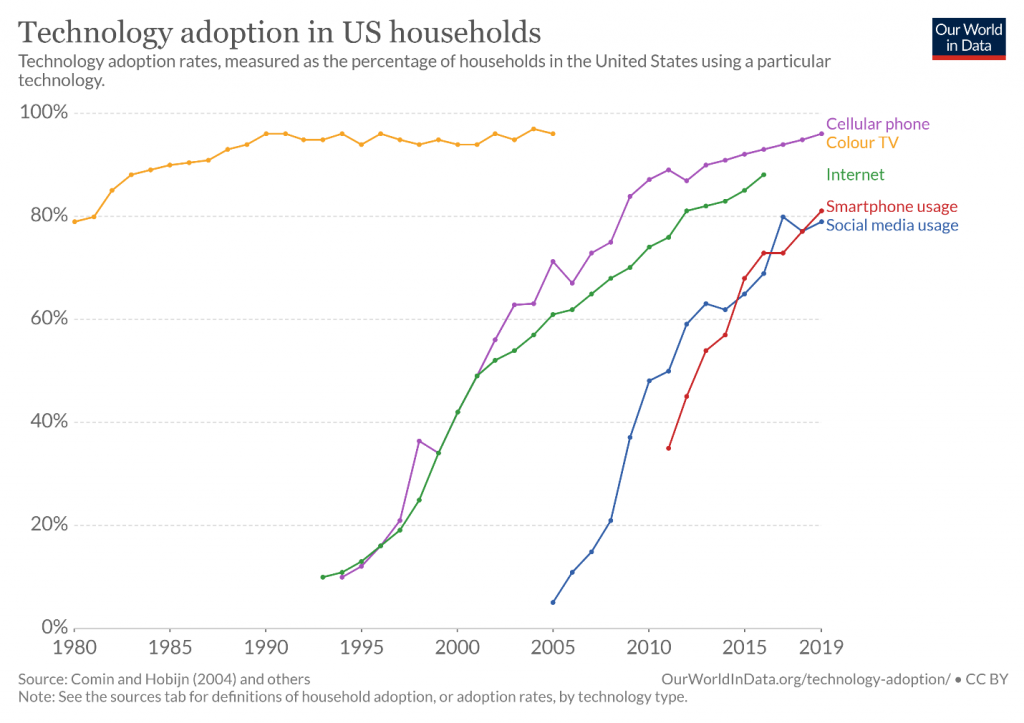 Image courtesy of Our World in Data.

Obviously, a telephone was readily available in 1980, but most households had only one or two landline phones; cordless phones didn’t become mainstream until the mid-1980s.

There was also no such thing as a cellular or mobile phone that fit in your pocket. In fact, they were as big as (and heavier than) a standard house brick – and they cost around $4,000, or around $12,500 in today’s dollars. In 1980, your phone away from home or work was a phone booth – and there likely would have been a line of people waiting to use it during a pandemic.

Forty years ago, email wasn’t available to the general public, and everyday use of the internet was still 15-plus years in the future. Of course, writing a letter and mailing it has always been an option for someone stuck at home during a pandemic – but imagine having to do that in 2020. You could use faster services in 1980 like UPS and Federal Express, but these were rare alternatives for personal letters. Fax machines were around, but few households could afford them.

Subsequently, there was no realistic way of working from home for most individuals. Conference phone calls were an option. However, without the internet, email, video calls, instant messaging, texting, computers and screen-sharing, working remotely in 1980 – in the same way we do today – was nonexistent. This would likely have resulted in substantially more layoffs than we’re experiencing this year, and that would have had an even bigger impact on Americans’ lives and the economy – compared to what we’re facing now.

Today, most people read their news on a screen. That wasn’t an option in 1980 when the daily newspaper was king. Problematically, though, newspapers then (and now) offer the consumer yesterday’s news. Radios offered real-time news – and they would have been powered on around the clock in 1980 during a pandemic. But television was extraordinarily different in 1980.

Most TVs received only a handful of broadcast channels, namely NBC, ABC, CBS, and PBS. There was no CNN (until June 1980) no Fox News, no CNBC, no C-SPAN, etc. Americans got local news updates at specific times in the morning, afternoon, early evening and late at night. Their only way of receiving a national TV news roundup was to tune in at 6.00 p.m. Eastern to watch one of these four news programs:

When breaking news occurred, the TV networks would interrupt programming for a special report – usually delivered by one of the eight anchormen mentioned above – but you had to be watching TV at the time to see it, of course. More often than not, somebody else (who had heard about the event on the radio or had seen it on TV) delivered the breaking news to you – via phone or in person.

There was no routinely scheduled 24/7 TV news coverage. Some major events warranted round-the-clock coverage – but the networks would always transition from constant coverage to frequent coverage to regular reports.

Televisions, radios, books, magazines, and all of the other basic past times were prevalent in 1980. However, the choices and on-demand format we take for granted today were decades away. Home movie consumption was limited to whichever films the four main TV networks aired. A few households had VCRs, but they cost around $700 (close to $2,000 in today’s dollars). Additionally, just one movie on video cassette was $85 (equal to $280 today) – so binge-watching a movie trilogy would have set you back the equivalent of $840 in 2020 dollars. There were no handheld screens – in fact, there was usually one screen available to everyone in the home.

Fighting COVID-19 is a new global war but instead of people fighting each other, we’re coming together to fight an invisible enemy. From local communities all the way up to leaders of nations, people are coming together and processing and sharing all of the information they receive about the COVID-19 via video chats, social media, and other methods. Soon, we will be living in a “Post-COVID World.”

Whether or not we were better off not having all of today’s modern conveniences in 1980 is up for debate. However, we should be thankful to the people who researched, developed and perfected all of the technological mainstays that most Americans rely on and enjoy in the 21st century. Today’s new normal would have been a lot different 40 years ago.