The Challenges of Domestic Violence Investigations

Every officer has been there: The dispatcher calls out for someone to take a domestic violence call, only to meet with silence over the radio as officers hope someone else will volunteer. A few officers coincidentally log themselves out on extra patrols, special assignments, or meal breaks. Others scramble to find something else to do that they could argue takes precedence.

Apart from a rape or decomposing body, domestic violence calls are often one of the least favorite calls for officers to handle. Domestic violence investigations are much different than any other type of police investigation. The intrinsic difficulties of domestic situations, especially recurring ones, can be stressful on officers who enjoy more clear-cut calls for service.

Here are ways officers can be better prepared for these calls for service.

Maintain Officer Safety
When responding to a domestic dispute, officers must remain cognizant that anyone on the scene could pose a threat. Domestic disputes are peculiar in that offenders often remain at the scene until police arrive. These situations are inherently problematic for officers due to an elevated propensity for continued violence to erupt, despite the officers’ presence.

It is not uncommon for suspects and victims to attempt to attack each other during the course of the investigation, usually when they hear what the other is telling the police. If officers develop probable cause for an arrest, there is undoubtedly a risk of harm when attempting to take the suspect into custody.

Domestic violence calls are further atypical because victims often attack officers upon seeing their loved ones being taken into custody. 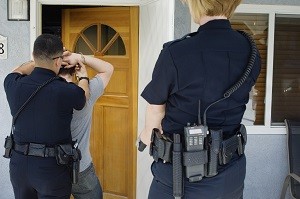 For these reasons, there should always be a minimum of two officers on each domestic violence investigation. Immediately upon arrival, officers should separate the parties in question so that they cannot see or hear one another.

However, officers must also maintain visual contact with all involved parties. This is typically achieved by having the parties face away from each other at a distance while the officers face them so they can keep everyone in their direct or peripheral line of sight.

Investigations should take place away from areas that contain potential weapons (e.g. kitchens, garages with tools, and extremely cluttered areas where weapons could be hidden). When feasible, each party should be checked for weapons.

It is important for officers not to make assumptions about who is the victim and who is the perpetrator. Often times, the person who initially appears to be the victim ends up being the offender. Officers should respectfully treat all involved parties with a high level of caution.

In most other criminal investigations, police involvement usually ceases when the victim declares they do not wish to press charges. However, even if domestic violence victims refuse to press charges, police are still required to make an arrest on behalf of the state if probable cause can be formed.

In addition, officers are typically required to give victims information on the various services afforded to them by law that provide victim compensation, counseling services, domestic violence shelters, sexual assault treatment, legal assistance, relocation services, and many other victim assistance programs.

Officers and agencies could be civilly liable if they fail to make domestic violence arrests or provide information regarding victims’ rights, which adds a sense of pressure and urgency when handling these situations.

However, domestic violence victims and witnesses often refuse to provide information, even if they initiated the call for police. Witnesses may wish to remain anonymous to avoid retaliation. Oftentimes, victims just want the police to deescalate the situation, not take the offender to jail. This feeling is exacerbated when the offender is the sole provider in the household, serves in a parental role, or presents a threat of retaliation if arrested.

It is common for victims to impose some of the blame on themselves or feel shame and embarrassment because the entire neighborhood has seen the police at their residence. Even children are programmed by victims and offenders to lie to the police.

In order to gain information about the situation, police officers must separate the parties, calm each individual down, and start building a rapport with them before attempting to gather information.

When Victims Don’t Cooperate
Sadly, some individuals simply cannot be coaxed into cooperation, leaving officers with the difficult task of developing probable cause based on observations alone.

Officers often have to take extra photographs of the residence or involved parties to help substantiate that there was actually a disturbance. They also might need to rely on the expertise of emergency medical services (EMS) to help diagnose and confirm injuries. Sometimes officers need to perform an on-scene background investigation, more thorough than a simple warrants check, in order to help confirm a history of domestic violence.

If officers fail to take these extended measures and future violence occurs, those officers and their agencies could be held liable.

Conclusion
Domestic violence investigations are different than any other type of police investigation. Officers face the threat of potential violence from both offenders and victims. Victims and witnesses often do not cooperate with the police, making it difficult for officers to piece incidents together and develop probable cause.

Regardless, officers are required by federal and state laws to try and prevent further violence while simultaneously minimizing the risk of civil liability. Anticipating and strategizing against these difficulties can help officers become more effective in domestic violence investigations when these calls for service arise.

About the Author: Jeremy Nikolow is a police officer with the Daytona Beach Police Department in Florida and an adjunct faculty with colleges and universities. His law enforcement career began in 2005 and has involved several areas of patrol, investigations, SWAT, and specialized operations. Jeremy presently serves as a field training officer. He graduated from American Military University in 2012 earning his Master of Science degree in Criminal Justice.