On October 8, Thomas Eric Duncan, the first person ever diagnosed with Ebola in the United States, died at Texas Health Presbyterian Hospital in Dallas where he was being treated. This first case of Ebola Virus Disease (EVD) being diagnosed in the U.S. reinforces the need for a comprehensive approach to community preparedness that includes public health, healthcare, and emergency management.

This case illustrates the need to reinforce and strengthen our approach. The hospital initially failed to identify Duncan as a potential Ebola victim, delaying the notice to public health authorities. 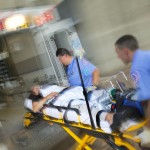 Upon confirmation of Ebola, the public health system’s emergency preparedness and response protocols went into effect. Public health agencies implemented long-exercised response strategies to mitigate the threat to the community by tracking down and quarantining (as necessary) the more than 100 people who may have come into contact with Duncan.

As with any emergency operations strategy, flexibility and adaptability are essential for an effective response.

Establish Further Protocols
It is essential that the emergency management and public health preparedness professionals openly discuss the risks and vulnerabilities from health threats. Most hospitals are not public entities, therefore, more needs to be done to mandate that hospital preparedness systems integrate with community public health and emergency management systems.

For example, protocols need to be put in place requiring public safety answering points (PSAP) telecommunicators (911 operators) to ask additional questions when someone requests response for a medical emergency. Just like requests for law enforcement or fire response, more information often leads to a safer response for all involved.

The Centers for Disease Control (CDC) recently issued a document, which provides PSAPs with guidance about how to respond to patients with suspected Ebola symptoms as well as how to address community inquiries.

Learn From Other Agencies
Several agencies have implemented such enhanced protocols. For example, the New York Fire Department has recently changed its dispatch protocols for those seeking EMS for medical emergencies. Callers who complain of flu-like symptoms are being asked about their travel history and if they may have encountered individuals infected with Ebola. This information is transmitted to responders, giving them the opportunity to take additional precautions. Responders don proper personal protective equipment (PPE) and implement respiratory and body-substance isolation precautions to protect themselves and hospital professionals prior to attending to the patient.

Why Ebola Should Not Cause Panic
Despite the media’s reaction to Duncan’s case, neither the public nor healthcare providers should panic about the emergence of Ebola in the U.S. For one thing, Ebola is not considered highly contagious—the risk of infection from other highly communicable diseases such as measles, norovirus, chicken pox and even influenza are greater.

The challenge of Ebola is identifying potential patients with symptoms. Such symptoms may appear anywhere from two to 21 days after contact with the blood or body fluids of a person who is sick with Ebola, but the average is eight to 10 days. Symptoms include:

Patients are not considered contagious until symptoms are present.

The CDC has provided patient assessment recommendations for EMS providers.

If the patient has symptoms of Ebola, ask the patient about risk factors within the past three weeks before the onset of symptoms, including:

While the risk of contact with an individual with Ebola is minimal, there is even a lesser threat of human-to-human transfer without direct contact with contaminated patient’s body fluids.

To mitigate the risk, every EMS agency should have an exposure control plan designed to minimize exposure risk and protect both the patient and the responders. The Occupational Safety and Health Administration (OSHA) requires all public safety professionals to have annual training in infection control and risks from blood-borne pathogens, but increasing training opportunities will increase confidence in the protocols that keep everyone safe.

About the Author: Anthony S. Mangeri, MPA, CPM, CEM, has more than 30 years of experience in emergency management and public safety service. Currently, he is the Director of Strategic Relations for Fire Services and Emergency Services at American Public University System. Anthony also serves on the faculty in the School of Security and Global Studies at American Military University. He has been a volunteer firefighter and EMT for more than 25 years. He earned the rank of Assistant Chief-safety officer. Mangeri earned a Master of Public Administration from Rutgers University and is a Certified Public Manager. He also serves on the Fire & Life Safety Council of the American Society for Industrial Security.