The first installment in this series can be found here.

In the fall of 2017, I concluded a study on the challenges facing fire chiefs of combination departments in the Midwest. I had predicted that the three major issues for fire chiefs would be the breakdown of the volunteer firefighter system, increasing training requirements, and political obstacles.

It was a surprise to find that budget limitations were by far the most frequently reported issue and perceived to be the most detrimental to combination fire departments across the Midwest.

Budget limitations soared above the other categories with nearly 80 percent of chiefs reporting it as an issue for their department. If this figure were generalized to the fire service in the Midwest region, then roughly 6,700 fire departments are facing issues caused by insufficient budgets. Even more telling, not only did the vast majority of chiefs perceive budget limitations to be a challenge, but nearly half of them reported that it was their number one most hindering issue.

The vast majority (91%) of the chiefs who indicated budget limitations as a challenge for their department also reported it to be one of the most influential issues.

It is interesting to consider that budget limitations may be perceived as such a prominent and influential challenge because it affects, at least to some degree, many of the other issues within a fire department. Some of these issues, including training requirements, volunteer retention and recruitment, were also included in the study.

Similar to economic theory, the trickle-down effect of problems caused by insufficient budgets is likely what caused it to be almost unanimously chosen as the biggest issue facing fire chiefs of Midwest combination departments. Resolving this single issue may contribute to the resolution of both related and numerous “unrelated” challenges within departments. The trickle-down effect could therefore become a positive way to address several issues simultaneously and maximize the taxpayer’s dollar.

For example, increased funds could provide additional incentives and ease training demands for already time-strapped volunteers. Providing additional staffing or coverage could relieve the feelings of burnout and frustration. However, as any good leader or manager knows, it is foolish to assume that simply throwing money at an issue will fully resolve it. What is for sure is that not fully understanding an issue is an easy way to continue or provoke it.

The degree to which chiefs agreed on the presence and detrimental influence of insufficient budgets reveals that this issue isn’t a novel one. In fact, industry magazines and publications like Fire Rescue 1 and Fire Engineering have discussed the downfalls of budget limitations extensively.

Low staffing training and procedures adopted to continue operations and mitigate the various harmful effects caused by inadequate funds. However, despite this knowledge and attention, little – if any – scholarly research can be found on the topic of fire department budgets.

The lack of scholarly research has several possible implications. First, chiefs are currently only able to rely on trade and peer research, which often appears biased, to justify their budget needs. Also, while these publications provide great insight from within the fire industry, new ideas and advice are gained when research is conducted by outside third parties.

Chiefs largely understand the importance of the budget and its direct effect on their department, but are often not presented with the view of their budget from the eyes of others such as the city manager and finance director. Beginning scholarly research on budget challenges could assist chiefs and the city administration to gain a more rounded understanding of the problem. A shared understanding between all involved is the first step towards much-needed collaboration and a widespread solution.

The next article in this series will delve into the challenge of volunteer firefighter recruitment and retention, which continues to hinder departments and baffle chiefs despite a vast amount of industry and scholarly research. 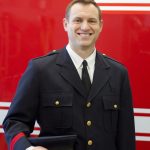 About the Author: Brad Davison is an engineer/paramedic in Indianola, Iowa. In the fall of 2017, Brad completed his Master’s degree in Public Administration, with a concentration in Emergency Management from American Military University. Beginning his career as a POC firefighter, Brad has a passion for combination fire departments. To contact the author, please email IPSauthor@apus.edu.