You Must Read This: Firefighter Opens Up About His Own Mental Health Struggles

Earlier this year I wrote an article about mental health in law enforcement. The National Study of Police Suicides (NSOPS) released a report in January 2013 that found suicide was once again the leading cause of police deaths in 2012. While suicide rates were down by 14% from 2009 (the last time this survey was conducted), the fact remains that suicides are too prevalent.

For that particular article, I spoke with Ron Clark, Sergeant (Ret.) of the Connecticut State Police, who was one of the lead researchers of this study. One thing he said really stuck out:

“Everything is focused on suicide, but that is not the real issue. The real issue is mental wellness of officers,” he said. 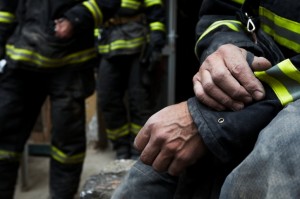 Today, I read a very powerful blog post by Captain Willie Wines Jr., a career firefighter who struggles with depression and mental health issues. The article is titled When Firefighters Need Rescue and takes the reader through the very painful and intimate challenges he faced after the suicide of his brother, including the guilt and pain he experienced as a result of the traumatic event.

And—as is the case for many of those in the public safety sector who are regularly subjected to atrocious and traumatic situations—all the memories of death and pain and the terrible things he had seen and experienced as a firefighter came rushing back to him. The suicide of his brother opened the “filing cabinet,” he said, of all the bad memories and experiences he’d had, which compounded his current trauma.

Wines’ article doesn’t dance around his pain or try to cover up his struggles. He openly discusses his depression, his drinking, and his withdrawal from family and friends:

“I spent most days alone and crying, trying to drink enough to dull my thoughts and the pain. I couldn’t think straight or concentrate on any single task. Every day, I knew I needed to get out of bed and do SOMETHING… ANYTHING, but I just couldn’t make myself do it. I felt as if I were (or may go) insane. I didn’t talk to my friends or family about what I was going through because I didn’t want to hurt them too. I didn’t want to talk to someone else because I didn’t think they’d understand.”

What helped him get out of this mental abyss?

A fellow firefighter. Wines didn’t just receive recognition from his friend that he was going through a tough time. His friend got him help. His friend made him get help. It is one thing to recognize that someone we care about is suffering, but it takes all levels of courage to get them the help they need.

Wines says it saved his life.

But the blog post doesn’t end there. Wines doesn’t pretend that recovery is easy or straightforward. He discusses the reality of being admitted into a psychiatric facility, seeing a counselor (several actually), and taking prescription medication to help get him back on course.

He is recovering day-by-day. He is back on duty. He is proof that you can reach the bottom and come back to the surface. It is a personal and painful story about taking the steps necessary to get your life back and it is proof that you need not lose hope when you are at your lowest.

I hope this article and Wines’ message is shared with all those who work in public safety. For too long, public safety professionals have buried their emotions, their pain, and the traumas they have experienced during their careers deep down inside them, hoping they can’t resurface. Well they do resurface. You can’t hide from it. So as Wines says: Seek help. Take care of yourself, physically and mentally. Here are more of his lessons for you:

What would you add to this list? Don’t forget to read the blog post in entirety here.