U.S. Special Operations Forces Deployed To 70% Of The World’s Countries In 2016 [Infographic]

Armed men in uniform identified by Syrian Democratic forces as US special operations forces walk in the village of Fatisah in the northern Syrian province of Raqa on May 25, 2016. (DELIL SOULEIMAN/AFP/Getty Images)

On 29 January, U.S. Special Operations Command launched a raid in Yemen targeting 38-year-old Qassim al-Rimi, the leader of Al-Qaeda in the Arabian Peninsula. This was the first high-profile special forces operation of Trump’s presidency and it resulted in the deaths of at least 14 Al Qaeda fighters, over 20 civilians and Navy SEAL William “Ryan” Owens. Three other Americans were reportedly wounded while an Osprey tilt-rotor aircraft was destroyed after a hard landing. It emerged in recent days that al-Rimi survived the raid and he released an audio message on Sunday taunting the president.

Raids like the one in Yemen are nothing new; U.S. special operations troops have been embroiled in constant battle since 9/11 from the back alleys of North Africa to the mountains of Afghanistan. However, the majority of their missions around the globe are related to training local troops to fight, mainly so Americans don’t have to. Iraqi special operations units such as the Golden Brigade which led the assault on Mosul learned their trade from their U.S. counterparts. American Green Berets have also trained soldiers in Lithuania, Latvia and Estonia on how to counter Russian proxy warfare, should Moscow conduct similar operations to those seen in the Crimea and Eastern Ukraine.

American special forces deployed to 138 nations last year – 70 percent of the world’s countries. That’s according to data from U.S. Special Operations Command published by TomDispatch. While the official data did not acknowledge military action on the ground in Somalia, Syria and Yemen, there is overwhelming evidence to the contrary and those three nations were included in the overview. 55.29 percent of the deployments were in the Middle East, a 35 percent drop since 2006. During the same timeframe, deployments of elite troops to Africa skyrocketed 1,600 percent. 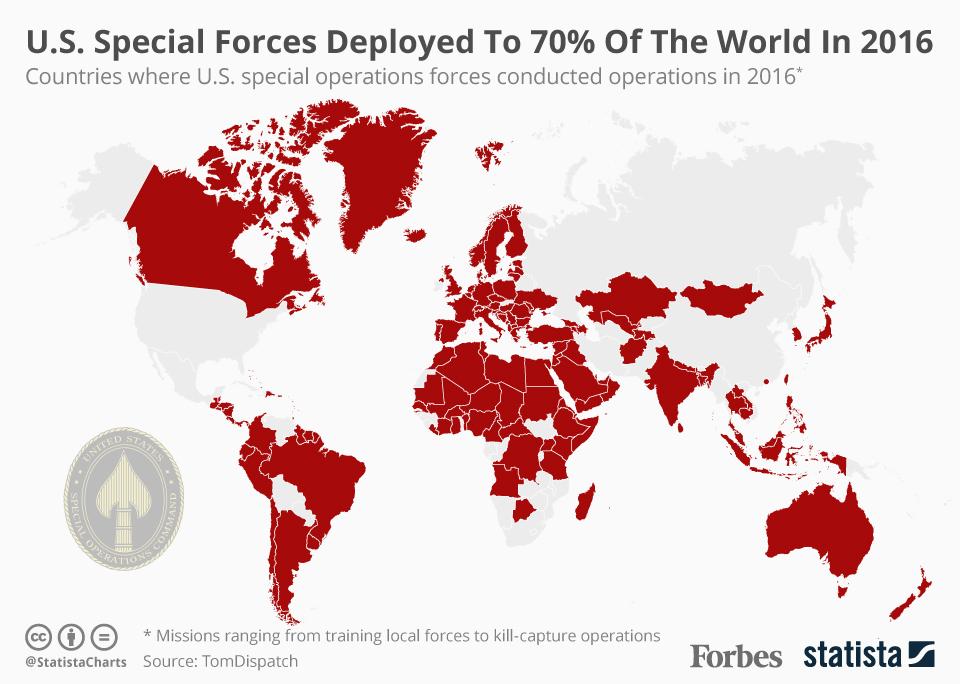 This article was written by Niall McCarthy from Forbes and was legally licensed through the NewsCred publisher network.

Applying The Power Of Deep Learning To Cybersecurity