Even for someone as highly trained and experienced as Jack Reall, who has been involved with Urban Search and Rescue (USAR) for 20 years, the catastrophic destruction of the March 22 landslide in Oso, Washington was incomprehensible.

“It’s being referred to as a ‘mudslide,’ which makes you think of soupy mud coming down the mountain, but in reality that land was moving at speeds of 100 miles an hour when it impacted other materials,” said Reall. “Mass being moved at that speed causes enormous destruction.” 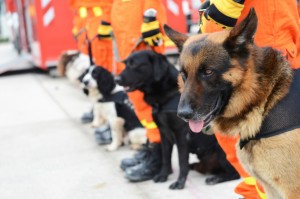 Responders at the scene expanded on the devastating collapse pattern: “The mountain didn’t slide like an avalanche that starts at the top and slides down. It actually blew out at the bottom. And all of that energy, because of the weight of top on it, blew across the river and brought all that water and material in it,” said Lt. Richard Burke, a firefighter and incident spokesman in a recent news article.

As a result, there are some areas of mud and debris that are reportedly 80 feet deep, making rescue and recovery operations extremely challenging. Mudslides also make for extremely difficult rescue operations because, unlike building collapses for example, there are very little void spaces where people could potentially survive, according to Reall.

Training, Tools and Equipment
Reall is a USAR instructor as well as battalion chief at the Columbus Fire Department. He has responded to many catastrophic events (including the 2001 terrorist attack on the World Trade Center—you can read his account here). In terms of training people to respond to such events, Reall said USAR focuses on teaching response principles rather than training for specific events, simply because “there’s no way we could train for everything.”

While some state USAR teams specialize in certain types of responses (i.e. California teams may focus on earthquake response, while the Southeast may study flooding rescue scenarios), specialization remains more at the management and strategy level than for those conducting rescue operations. Those on the ground must apply the principles they’ve learned to the specific situations they find themselves in.

In terms of equipment used for such a rescue, the Oso mudslide presented many significant challenges.

“There are not a lot of technologies that can be used because of the massive amount of materials,” Reall said. “For example, something covered by just a thin layer of dust or mud means that thermal imaging signature is gone.”

Rescuers may have better luck using listening devices, but that requires being able to reduce interference and noises, which can be challenging at a site this large. As reported by several news outlets, rescue operations have had some success using canine teams, although cold temperatures and wet conditions have made it difficult for the dogs.

Political and Interagency Complexities
Another significant challenge is that of interagency coordination, which will always be present during large-scale and complex responses.

“It can be difficult for local and state officials to work together, but when you introduce civilian and military resources, you end up with a lot of political dynamics that can effect rescue operations,” said Reall. Such issues can be very simple, too. For example, the team must determine the victim identification process. When victims are located and removed, where do they go—to a local coroner or a state agency?

Trying to manage and coordinate such an incident can be overwhelming.

“The best way to describe it is like eating an elephant: You can’t eat it in one bite, you have to take lots of small bites,” Reall said. Incident commanders and team leaders must manage complex events in small pieces and identify priorities very quickly. To add to the challenges of an event, individuals as high up as the White House are calling for information about rescue operations and resource inquiries. “Incident commanders are trying to answer everyone as quickly as possible, but it definitely deviates from what they’re trying to do in terms of the rescue,” he said.

Reall has held all positions in USAR operations, from rescuer to incident commander. During such incidents, he said the most important thing is to continuously refocus one’s team on helping the victims. “You cannot lose sight that we’re there to help the victims and our goal is to make their situations better,” he said.