As the 75th anniversary of D-Day approaches on June 6, the number of America’s surviving WWII veterans is dwindling quickly. With nearly 400 veterans passing away daily, fewer than half a million of the more than sixteen million men and women who served are alive today.

At this watershed in the post-war era, and as it does annually in ceremonies at battle sites, cemeteries and museums, France will honor those who fought on the beaches of Normandy over the D-Day landings.

Stateside, The National WWII Museum in New Orleans will also commemorate the actions of those who in that seminal point in the European theater ultimately saved the world from Nazi tyranny. 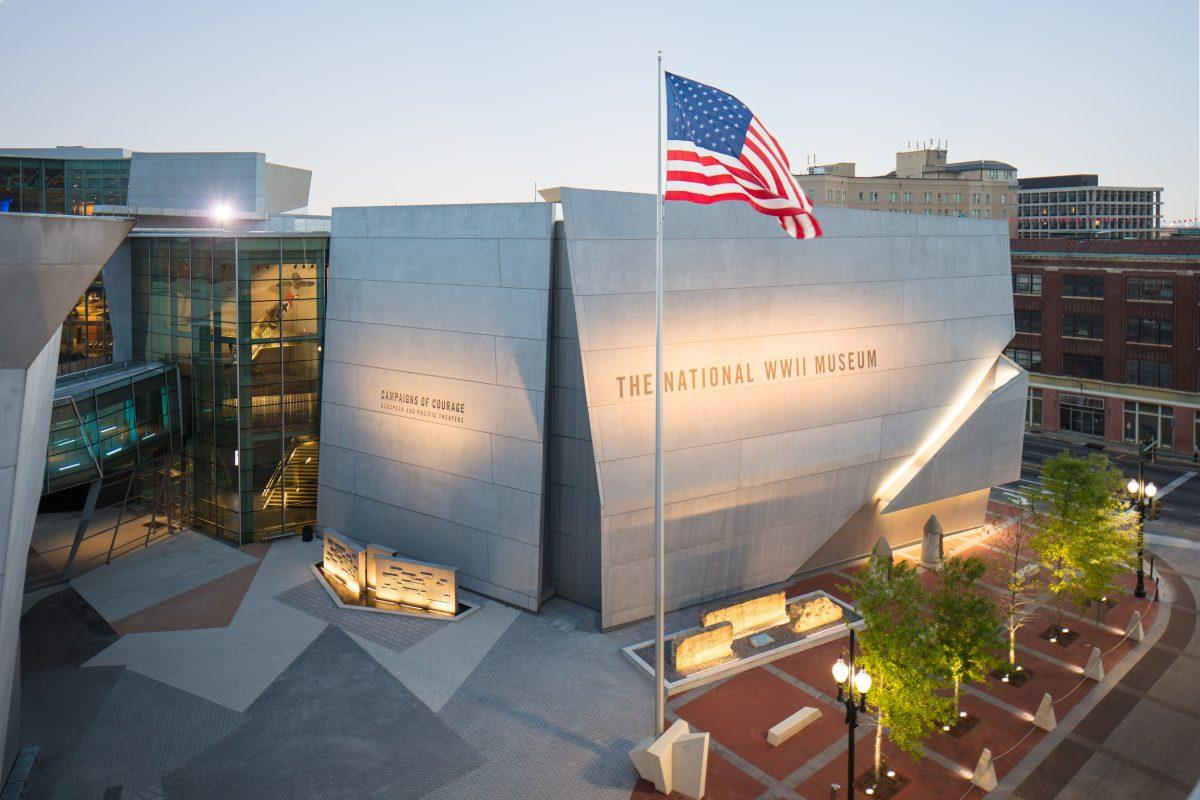 Not only will the National WWII Museum observe the 75th D-Day anniversary, but as it has since its founding in 2000 in the Crescent City’s Warehouse District, the museum all year around more than carries its weight in educating the public on the events that forged Pax Americana.

We can expect the institutions’s mission to grow even deeper as WWII slowly becomes as distant in the collective consciousness as the Great War now has, which upon the centennial last year of its Armistice must have seemed for many young people to be as long ago as the Civil War.

To take in what is surely one of the largest collections of exhibition halls you’ve ever come across, two days does proper justice to a tour of the museum.

In a model Pullman coach of the type that transported troops across the country, which is located in the museum’s original Louisiana Memorial Pavilion (Building No. 1), visitors can start by picking up a digitally-enabled dog tag and begin to track the story throughout the museum of a real soldier or civilian. 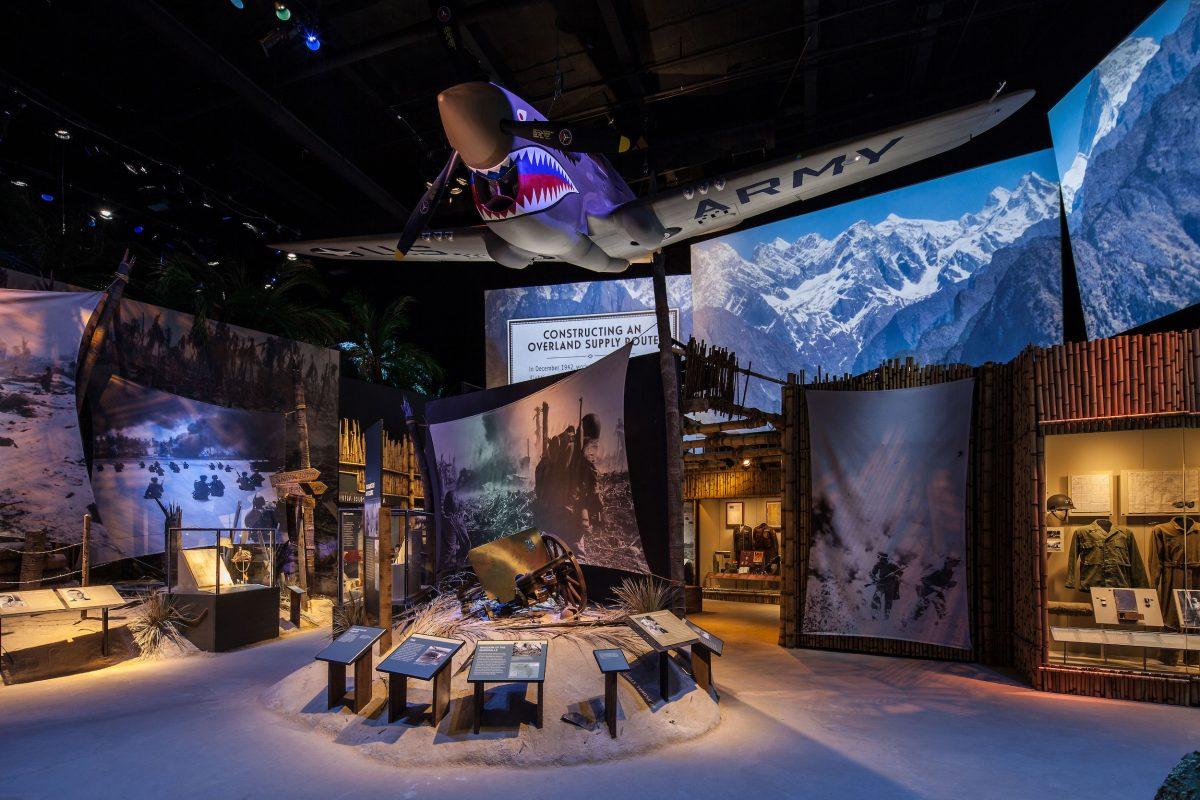 The Road to Tokyo exhibit hall in the Campaigns of Courage pavilion.

Upstairs, the D-Day Invasion of Normandy exhibit is loaded with chilling photos of the invasion, including those shot by the great war photographer Robert Capa. In this original of the museum’s exhibits, guests learn about the buildup of the Allies’ “phoney war” that was designed to fool the Axis into expecting an invasion around Calais rather than Normandy.

A model of an Atlantic Wall fortification shows how frightening the Germans’ concrete and steel positions appeared, even if in truth the coastal defense system never matched the Führer’s ambition. A simple but also foreboding instrument, “Rommel’s asparagus” were timber poles placed at a slant on the beach in order to maximize damage to invading boats and which prompted the Allies to invade at low tide along the beaches of which the most famous are known as Omaha and Utah.

The museum’s collection of weaponry includes those of the non-lethal sort, such as a version of the Enigma machine—one with a sheet of its German operating instructions still pasted inside its wooden box lid—that illustrates how much of the war took place behind the scenes for all combatants.

Indeed, the adjacent Arsenal of Democracy exhibit concentrates on the noncombat contributions of the U.S. home front. In addition to the story of stateside industrial output that effectively won the war, it details the research work behind the Manhattan Project which definitively ended it.

The exhibit also honors the role of women, African Americans, Japanese Americans, Latino Americans, Navajo Codetalkers and many more whose tales in combat and beyond had been neglected for too long until recently. 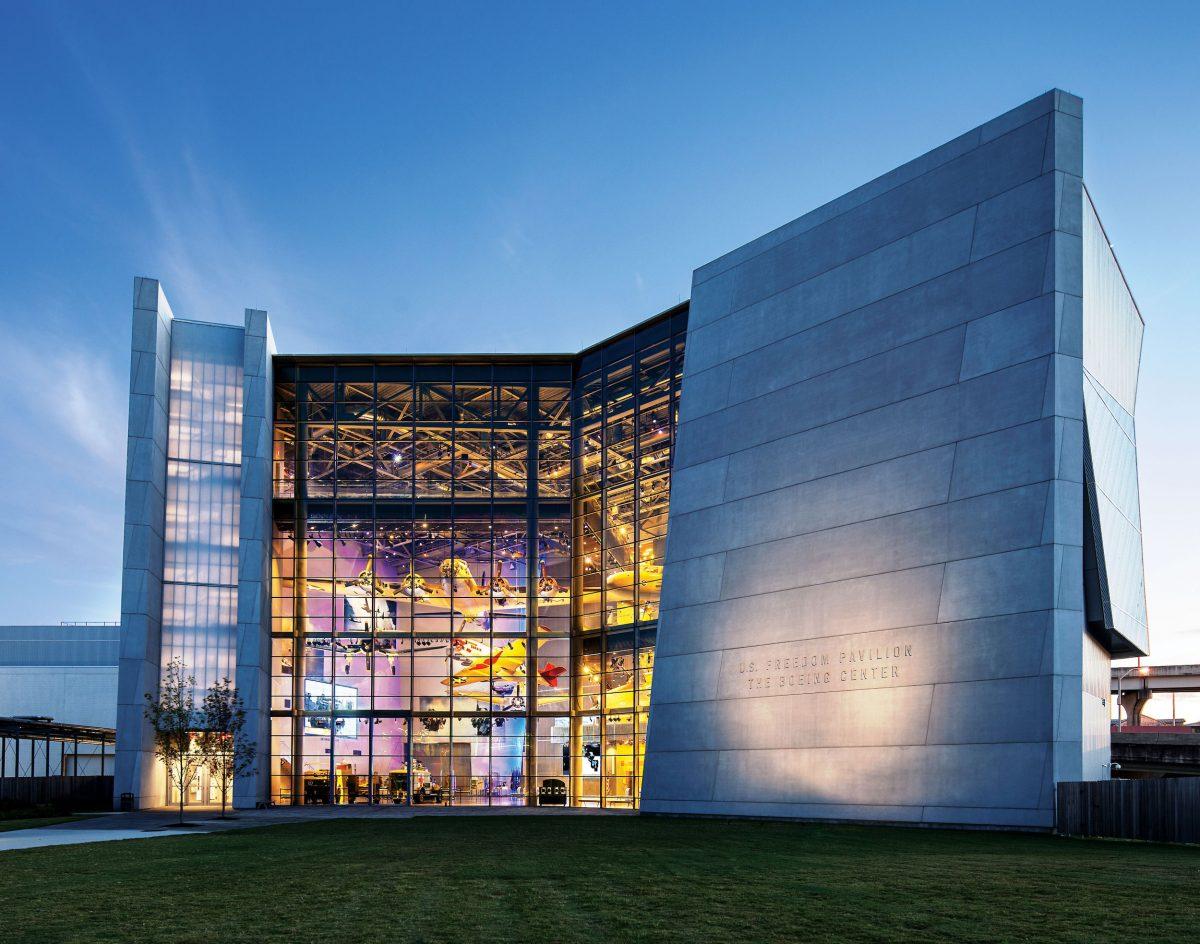 The National WWII Museum’s US Freedom Pavilion: The Boeing Center.

With 160,000 troops storming the beaches, the D-Day landings were a vastly confusing affair. The wise visitor will do themself a favor and order in advance the museum’s brand new accompanying book “Everything We Have.” Its tales range from the leadership of General Theodore Roosevelt, Jr. to firsthand oral accounts by veterans, such as Private Hal Baumgarten who was wounded five times on Omaha Beach and whose Purple Heart and two Bronze Star exploits inspired scenes in the film Saving Private Ryan.

Mounted through October 20 as part of the 75th Anniversary of D-Day, the exhibit In Memory of What I Cannot Say is devoted to the paintings of French Resistance fighter Guy de Montlaur who suffered combat wounds and later became an artist. De Montlaur may not be a household name in art circles, but this fascinating character tackled issues in his Cubist and Expressionist works of what we now call PTSD.

For a heart-pounding D-Day narrative, a theater in Building No. 2 shows the Tom Hanks-narrated film Beyond All Boundaries. Be forewarned that it’s not so much a movie as a full-on 4D experience that will have your seat literally rumbling as the bombs fall, and whose decibel level will help you appreciate what sheer terror the invasion must have been for those who lived it. 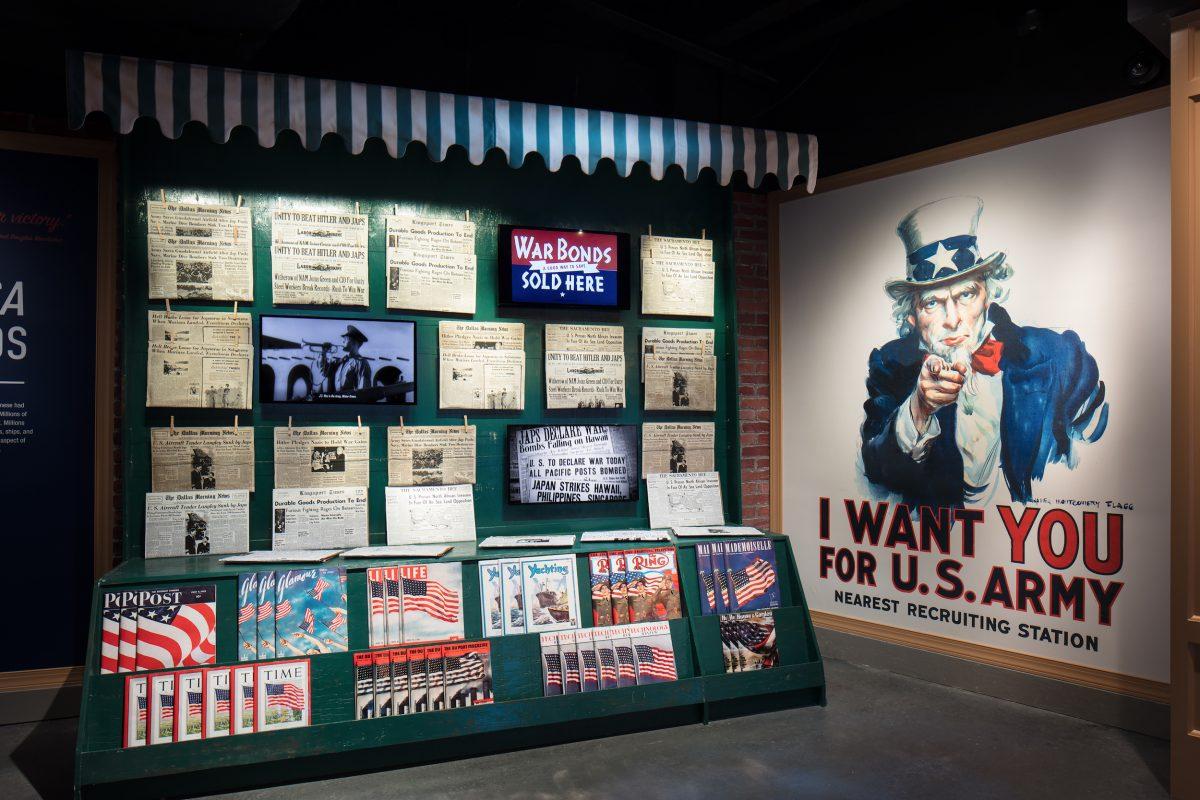 When you need a break at some point, the casual bar and terrace space The American Sector that opens out onto Magazine Street serves Southern cooking along with burgers and more. Back in Building No. 1, the Jeri Nims Soda Shop is just the sort of All-American looking period diner that you’d imagine. For those with more time, BB’s Stage Door Canteen hosts swing and boogie-woogie bands, as well as the Victory Belles who sing à la Andrews Sisters.

You still have a long way to go, and perhaps you might save Building No. 3 and its Campaigns of Courage pavilion for the next day, your own D+1 visit. The newer exhibits there, Road to Berlin and Road to Tokyo, wind you chronologically through the war theaters, within halls whose state of the art displays are meant to evoke their respective terrain; in the case of Tokyo, you can almost feel the torrid jungles of the Pacific islands.

Building No. 4  is devoted to the US Freedom Pavilion: The Boeing Center. A series of high catwalks there allow you to get up close to some of the great flying machines of the war. Interactive panels detail the inner workings of aircraft such as the Corsair fighter plane and various bombers.

On the opposite end of the experience spectrum from these multiple massive exhibitions, guests can book an Into the Vault Tour package to see WWII artifacts up close that are not on display at the museum. Curator Larry Decuers (who also curated the Guy de Montflaur exhibit) and his colleagues are a fount of knowledge and anecdotes. 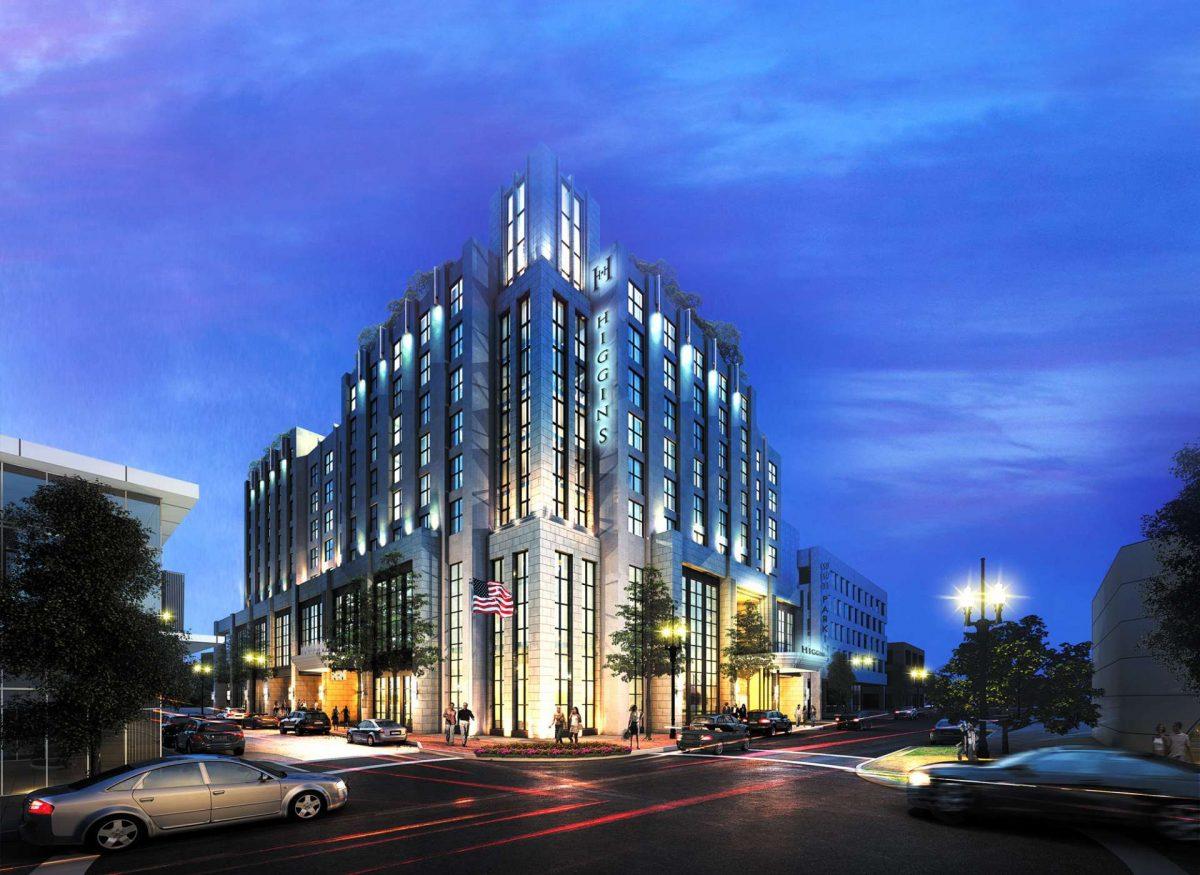 A rendering of the Higgins Hotel, soon to open on Magazine Street and Andrew Higgins Drive.

Stay tuned, folks, there’s much more to come. At the moment, huge cranes are constructing the museum’s 150-foot-tall Bollinger Canopy of Peace that will cover a large section of the campus. Soon to be finished, the 34,800-square-foot Hall of Democracy is an education, research and media center. The Liberation Pavilion will be devoted to the end of the war and postwar years.

Across from the museum on Magazine Street, the Higgins Hotel & Conference Center, a Curio Collection by Hilton property, will open later this year. With streamlined furnishings and decor reflecting the Art Deco Moderne of the war period, the 230-room property fills a void for a design hotel in the area.

The rooftop bar Rosie’s (as in the Riveter) promises some of the city’s best views, while Kilroy’s bar was inspired by the famous “Kilroy was here” doodle of the war period. And what other more apropos name for a restaurant is there than Café Normandie?

The public is invited to underwrite a room at the Higgins Hotel to honor a war veteran, Holocaust victim/survivor, home front worker or relevant individual from the WWII generation.

For its part, the Higgins Hotel is named for industrialist Andrew Higgins. Perhaps few people today outside of New Orleans know the name of the man whose wartime manufacturing plants produced 20,000 Higgins Boats, the amphibious landing craft that were a vital component of D-Day and the war effort, and one of which is displayed in Building No. 1.

That’s all the more reason in time for the 75th anniversary of D-Day and well beyond to discover the countless rich biographies and true tales of valor that make up the National WWII Museum.

This article was written by John Oseid from Forbes and was legally licensed through the NewsCred publisher network. Please direct all licensing questions to legal@newscred.com.