One of the best ways to gain a deeper understanding of the National Police of Colombia is to visit the National Police History Museum, which is referred to as the “Museo Histórico de la Policía Nacional.” It is located within the La Candelaria in the downtown of Bogotá D.C., Colombia’s capital. Interestingly, in the beginning, the museum was the first police headquarters.

History of the National Police of Colombia

The National Police of Colombia was created on November 5, 1891. It is a professional police agency that has law enforcement responsibilities throughout the country.

The National Police of Colombia is part of the Ministry of Defense, along with Colombia’s military forces such as its Army, Navy and Air Force. This organization has almost 160,000 police officers, which provide police services to the 48 million residents of Colombia.

There are 32 departments, which are divided in eight police regions. Each department is normally led by a Brigadier General. The National Police of Colombia is a civilian institution with a military structure, even in ranks and promotions, because of its organizational culture and creation history.

There are many exhibits throughout the museum that reflects different phases in the history of the National Police of Colombia. The museum is very well organized and informative.

The pride and dedication of Colombia’s police was evident throughout the museum. In one area, there were photographs and clothing from the children of fallen officers who provided items that reflected their parents’ police service.

The Realities of Policing in Colombia

Colombia is a magnificent country filled with hard-working and kind citizens. But there are also problems associated with armed insurgent rebel conflicts involving organizations such as the Revolutionary Armed Forces of Colombia (FARC) and the National Liberation Army (ELN), which are responsible for terrorism and narcotics trafficking.

These activities have brought unprecedented danger to police officers. The Colombia National Police Museum does a good job sharing insight into the dangers of serving as a police officer in Colombia.

Some exhibits reflect the dangers of bombs and landmines in Colombian territories, which is often associated with internal armed conflicts.

The National Police of Columbia’s Peacebuilding Police Unit (known as UNIPEP) established a Colombian Police Historical Memory website to honor more than 62,000 police officers victimized during internal armed conflicts in Colombia. Over 4,214 officers were killed, 774 were kidnapped, and 118 disappeared.

Major Efren Munoz acts as the designer and author of the website.  Major Munoz says that the National Police of Colombia is building its Institutional Historical Memory website as a contribution to the recognition, truth and reconciliation that victims in the internal armed conflict deserve.

This is especially true to those police officers, who in their constitutional mandate, offered their lives to safeguard citizens’ safety and guarantee a peaceful coexistence. They are considered as victims by the internal armed conflict by law.

The National Police is a civilian institution, so Colombia police officers are not military nor combatants, and they were massively attacked in urban areas during several years by the guerrilla groups. Major Munoz says, “It is our commitment to keep alive their memory and courage. The sacrifice made by thousands of Colombian police officers must not be unknown for future generations.”

Colombia’s geography makes it susceptible to cocaine production. Three mountain ranges within the Andes Mountains in Colombia create an environment where coca leaves thrive. Coca leaves harvested by farmers is often mixed with ether, sulfuric acid, and other chemicals to produce cocaine.

Colombia has been one of the largest producers of cocaine in the world with the United States as its main consumer. A portion of the museum provides insight into the drug war. The museum pictures below reflect police efforts to identify and eradicate this worldwide problem of cocaine. 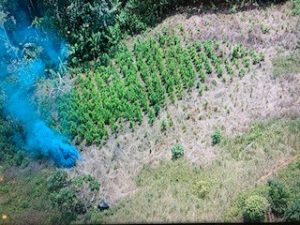 Kidnappings in Colombia Have Been Reduced

Through the hard work and efforts of the National Police, kidnappings that were once a prolific problem in Colombia have been drastically reduced to 92 cases in 2019. That’s a drop of 97 percent compared with the year 2000.

According to a report by the “Fundación País Libre,” published by the Colombian newspaper El Tiempo on August 24, 2004, the number of kidnappings in Colombia in 1997 did not exceed four daily.

However, kidnappings increased dramatically to 1,131 cases between August and December of that year. In 1999, this figure climbed to 3,334 and in 2000, it reached a maximum of 3,708 kidnapping cases. Merchants and children were the main victims of this scourge, followed by employees, public officials, engineers, ranchers, farmers, and even police officers and soldiers.

The letters discuss ransoms and steps that the kidnapping victims wish for family members to follow to assist in their successful rescue. Kidnappings were once common by insurgent rebel groups as a way to illegally finance their activities. Below are actual kidnapping victim letters provided to the museum.

The museum also provides valuable and insightful information on the changes of equipment, firearms, and technology used by the National Police. A motorcycle purchased by Pablo Escobar, the country’s infamous drug lord, and provided as a gift to his cousin is on display within the museum. Escobar’s cousin attempted to flee the police on this motorcycle, which resulted in his apprehension and the seizure of the motorcycle.

Overall, the Museo Histórico de la Policía Nacional in Bogotá D.C., Colombia provides an outstanding historical perspective of the National Police. This organization is a professional and world-renowned police agency that works hard each day to protect the citizens and visitors of Colombia.

Dr. Jarrod Sadulski is an associate professor at American Military University. He has engaged in speaking engagements in the United States, Central America, and Europe on the topics of human trafficking, narcotics trafficking, police responses to domestic terrorism, and various topics in policing. Most recently, he presented at the 2019 International Human Trafficking Conference. His expertise includes infrastructure security, maritime security, homeland security contraband interdiction and intelligence gathering. Jarrod was selected as the Coast Guard’s Reserve McShan Inspirational Leadership Award recipient for 2019. To contact the author, email IPSauthor@apus.edu. For more articles featuring insight from industry experts, subscribe to In Public Safety’s bi-monthly newsletter.

Major Efren Munoz is a member of the Colombian National Police with more than seventeen years of experience in police service and criminal investigation, especially in crimes related to transnational organized crime, money laundering, forfeiture assets, terrorism, and drug trafficking. The qualities which have supported his personal and professional career are honesty, responsibility, integrity, and leadership. He has held positions that have allowed him to know crime closely, giving him the ability to successfully lead investigative processes and police operations against international criminal organizations, while working together with international representation agencies placed in Colombia such as the Immigration and Customs Enforcement (ICE) and the Federal Bureau of Investigations (FBI) of the United States of America.

Despite Conflicts and Fire, Notre Dame Continues to Survive

Despite past conflicts and a devastating fire on April 15, 2019, the Notre Dame cathedral continues to survive and there are plans for it to be rebuilt.

Why is there an apparent turn away from the study of history when the need to correct historical illiteracy appears so great?

With the passing of former president George H.W. Bush, America lost the last of the “Greatest Generation” chief executives.

Creating a European Army Is Impractical for the EU

If past history is anything to go by, the possibility of a new ‘European Army’ is a bloody terrible idea.

Veterans Day 2018 Marks Centennial of End of World War I

11/11/1918 is the day that World War I officially ended. Veterans Day – this Sunday – marks the centennial anniversary of that date.

Exploding a nuclear bomb on the moon: Project A119 – as it became known – was summarized as one of the strangest scientific reports in human history.

History Outside of the Museum: Exploring a 16th-Century Torah

APUS had the opportunity to host an exciting piece of history – a Torah scroll used by a community of Jews in sixteenth-century Yemen!

After resting unnoticed for almost a century, Burton A. Williams is receiving an overdue honor: a veterans grave marker placed atop his final resting place.

The files contain an official “top secret” request for “special attention security check of all Jews travelling to the U.K.”