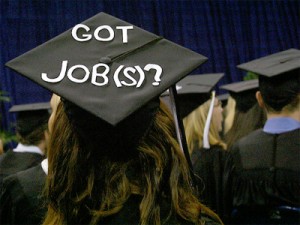 As we round out Q4 of 2012, we’re coming out of an election hangover and heading into the Holiday Season with the “fiscal cliff” looming. No, fiscal cliff isn’t a poorly named Hollywood thriller or a country music band. It’s a politically charged moniker referring to tax cuts set to expire at year’s end. Depending on whom you ask, it may or may not spoil the economic recovery. So what does 2013 have in store for newly educated job seekers? I don’t have a crystal ball, but my Magic 8 Ball reads, “Reply hazy, try again.”

Though the 2013 job market is difficult to predict, the National Association of Colleges and Employers (NACE), whose stated mission is “to facilitate the employment of the college educated,” posted a positive employer survey not too long ago. It’s entitled, “Job Outlook 2013: Hiring Up 13 Percent, Degrees in Demand.” Hopefully it’s an accurate sign of things to come–13 percent more hiring for new college grads when compared to 2012. And while it’s not a perfect bellwether, perhaps the survey is a much-needed uptick in employer hiring sentiment.

What’s most telling about the NACE survey results is that hiring trends sill reflect the much-reported demand for students graduating with core science, technology, engineering, and math (STEM) degrees. In fact, of the survey’s Top 10 Bachelor’s Degrees for the College Class of 2013, almost all of the career classifications are closely related to STEM disciplines.

Whether you’re graduating soon or you’re considering a degree that develops in-demand skills, the NACE survey illustrates a cross-section of hiring managers and recruiters and what they’re strategically planning for 2013. Which is good, because as our politicians tap-dance to a last minute compromise to avoid the dreaded cliff, it’s hard to read the tea leaves for 2013. Plus, I only drink coffee and lots of it. And as far as I can tell the K-Cups in my Keurig aren’t the best fortune tellers.

J. Thompson is the Vice President of the Content team at American Public University. He earned an M.F.A in Screenwriting from the American Film Institute in Los Angeles and performed his undergraduate studies in English literature, political science and business management between the University of New Mexico and East Carolina University. His career insights draw upon experience as a communications vice president supporting learning management, applicant tracking, and talent and leadership development for Bank of America and other Fortune 500 firms.

5G and the Digital Transformation