Strong Community Relations Among the Lessons of Ferguson

As tension and violence continued to escalate this past weekend in Ferguson, Missouri, there remains intense scrutiny about the response by police. Some vocal critics, like Missouri state Sen. Maria Chappelle-Nadal, accuse the department of being heavy-handed by using tear gas and other crowd disbursement techniques on peaceful protestors. However, news agencies report protestors continuing to provoke police by throwing rocks and Molotov cocktails.

The unrest was sparked by the death of Michael Brown, an 18-year-old black teen who was unarmed 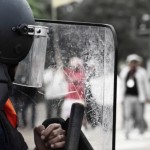 when he was fatally shot by a white police officer on August 9. The incident is under investigation and the facts of the case remain unclear. However, the community and the media have, by many accounts, reached a verdict that this incident was racially charged.

A primary concern for the Ferguson Police Department, as well as other agencies that have deployed officers, is not to lose focus on officer safety.

Officer Safety Considerations
Chuck Russo, a 21-year law enforcement veteran who retired from the Daytona Beach (FL) Police Department in 2013, said there is currently a high risk for officer injury. “There is probably a greater chance of officers being injured due to under-reaction rather than over-reaction,” he said. “Because the major media spotlight is shining on them, no one wants to be the next lead story. They will take the rocks and the bottles and not do anything.”

During such an intense situation, officers must rely on their training and try to neutralize threats without force as much as possible.

One challenge officers face is inexperience, said James Deater, a 23-year veteran of the Maryland State Police. “When these types of major events happen in smaller communities, many times the department just hasn’t had enough experience and training or the ability to test their community response,” he said.

Based on immediate media reports, perhaps the agency’s reaction should have been less confrontational. “It’s obviously a violent and stressful situation for all involved, so the agencies’ reaction may have either thrown gasoline on the fire or maybe it saved the city. You never know, it could’ve gone either way,” said Deater.

As the situation continues to draw national attention, there are several key lessons that other agencies around the nation can learn from the events in Ferguson.

Improve Community Relations
Without a relationship between law enforcement and the community, there is nothing to build on and nothing to keep a situation like this from escalating.

Deater believes there were underlying issues in Ferguson long before the death of Brown. “From the outside, it doesn’t look like this department had the best community policing procedures in place,” he said. “When all a community sees is police doing negative things like locking people up or conducting search warrants, citizens aren’t going to react well. There has to be some kind of community engagement.”

Some police officers scoff at community outreach, but it’s a vital part of law enforcement. “You better go out there and shake hands and meet the public and try to get as many of them to be your friends as possible, because if something like this happens in your community, you’re going to need their help,” said Deater.

Better Racial Representation in Law Enforcement
The Chief of Police in Ferguson Police Department told ABCNews that there are only three black officers and 47 white officers in the agency. In a city that is 68 percent black, why are only 6 percent of its police force black?

NPR News conducted an interesting interview with Ronald Hampton, a 23-year law enforcement veteran in Washington, D.C. and the executive director of the National Black Police Association about his perspective on the Ferguson situation. One of the points he made was the importance of African Americans being properly represented on the force.

“I would hope that young men and women of color continue to be interested in joining the police force, for themselves and their communities. Because they would be the safeguard [against] abuse, and they would definitely have a voice. And I can say that because it works. So I’d seriously tell them to consider jobs in the police force or fire department, because that’s the only way we’re going to be able to witness and deal with [abuses of] the system,” he said.

However, that’s often easier said than done, pointed out Russo, who spent eight years as a background investigator and was also involved in recruiting efforts. He said agencies can only do so much to encourage those less represented to be part of the force. “Many agencies bend over backwards attempting to recruit all types of people and often there just aren’t enough candidates who want the job out there,” Russo said.

As the nation looks for a de-escalation of tensions in Ferguson and answers about the death of Michael Brown, law enforcement agencies across the country will watch as events unfold for lessons to guide them if and when the national spotlight focuses on their community. Certainly, the importance of community relations and mirroring community demographics are among the issues that will get greater attention.