NOTE: This article first appeared at In Military.

Coming of age in Ronald Reagan’s neon-tinted 1980s, complete with big hair and big military spending, the Vietnam War was still a fresh wound on the psyche of America.

It was in this pre-Desert Storm environment that I was subjected to the over-the-top action movies of the 1980s like Commando, Top Gun and Rambo, which portrayed the U.S. military machine as an unstoppable force in an attempt to regain lost face in the aftermath of Vietnam.

And while some directors were focusing on the post-war veteran experience, like Michael Cimino’s The Deer Hunter, or simply using the Vietnam War as a setting for a larger story, like Francis Ford Coppola’s Apocalypse Now, there were very few directors willing to take an audience back to the authenticity and intimacy of the grunt soldier’s experience on the ground in Vietnam.

Platoon was my introduction to Stone’s work, and I used to listen to the soundtrack on cassette over and over, until the magnetic tape eventually disintegrated. Why the music of my father’s generation was vastly superior to my own is a topic for another time, but Stone took the audience in a completely different direction than was popular at the time, and it has had an impact on how I view the Vietnam War ever since. 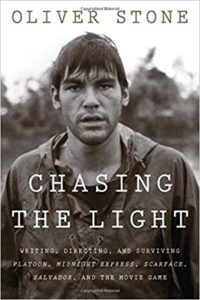 Making art is no picnic. Stone’s 330-page memoir, out on July 21 and covering his life and career up to his first major achievement — winning an Oscar for his 1986 Platoon, highlights many of the difficulties of “surviving the movie game.”

Despite my interest in independent filmmaking, and my own work on a documentary about the Vietnam veteran homecoming, I was more drawn to his descriptions of adolescence. Some of the most intriguing passages deal with his childhood and the struggles of dealing with divorcing parents while simultaneously trying to find one’s own path to maturity and adulthood.

While reading about Stone’s early life, I felt an eerie connection; our childhoods share many similarities, albeit separated by a generation. As a result, I found myself more empathetic to his childhood traumas than I might have otherwise been.

For someone also raised in a broken home, I feel Stone’s anguish when he writes, “Children like me are born out of that original lie, and living a false front, we suffer for it when we feel that nothing and nobody can ever be trusted again. Adults become dangerous. Reality becomes loneliness. Love either does not exist or cannot survive.”

For Stone, as it is with many in the military, myself included, maturity was thrust upon him very quickly through the unique experience of military service, specifically the Vietnam War.

As you would expect from a filmmaker, Stone’s writing style is very visual and descriptive and movie buffs will get a thrill from trivia tidbits like how he originally considered Keanu Reeves for Charlie Sheen’s part in Platoon.

Today, Stone is equally well-known for his controversy as much as his movies. Some critics accuse him of promoting unsubstantiated conspiracy theories, and of misrepresenting real-world events and figures in his works. His film JFK, about the assassination of President Kennedy, immediately comes to mind.

And therein lies the issue: Anytime a public figure makes a piece of art that goes against conventional wisdom or modern values, it gets labeled as “controversial.”

In reality, Oliver Stone is, like all of us, complicated. Think he’s a leftist? Bet you didn’t know he voted for Ronald Reagan in 1980. Think he’s a conspiracy theorist? Here are twelve crazy conspiracy theories that actually turned out to be true. Besides, his biopics on Edward Snowden and George W. Bush were shockingly accurate.

As a former servicemember, Stone might be considered the first veteran content creator of the modern era. For his service, his military awards include the Bronze Star with “V” Device for valor, the Purple Heart with Oak Leaf Cluster to denote two awards and the Air Medal among others.

Ultimately, the content that Stone creates, in the form of film directing and producing, is subjective, as all art is. And his book about his journey to becoming a successful content creator is well worth the read for anyone interested in the drive it takes to achieve your long-term goals, specifically in the film industry.

We rank books on a five-star scale:

Chasing the Light is an intimate memoir by the controversial and outspoken Oscar-winning director and screenwriter about his complicated New York childhood, volunteering for combat and his struggles and triumphs making such films as Platoon, Midnight Express, and Scarface.