By Leischen Stelter, editor of In Public Safety with American Military University

On the morning of December 4, 2017, Captain Peter Jensen of the Ventura County Fire Department was called out of his regular duties and given a field assignment. He was to assist Battalion Chief Fred Burris assess the wildfire conditions in Santa Clara Valley.

“We were expecting high winds, high temperatures and low humidity, so we were up-staffing the department—adding more firefighters and equipment,” said Jensen. He was told it would be a 24-hour assignment. Little did he know that night would quickly turn to days, and then weeks, as the Thomas Fire turned into the largest wildfire in California history.

But at 5:30pm, as Jensen and Burris stopped at a restaurant for dinner, there was still no sign of a fire. They had spent the day driving around the Santa Clara Valley, including the areas of Fillmore, Santa Paula and Ventura. “We had literally just ordered when the call came out and we were dispatched to a brush fire in our general area,” said Jensen.

The First on the Scene to the Thomas Fire

Jensen and Burris were the first operational command staff to arrive at the scene of the Thomas Fire. “As we were driving in, we could see the glow on the hillside growing rapidly,” he recalled. “The first four or five engines to arrive were trying to get access to the brush fire and also trying to protect structures and homes.” 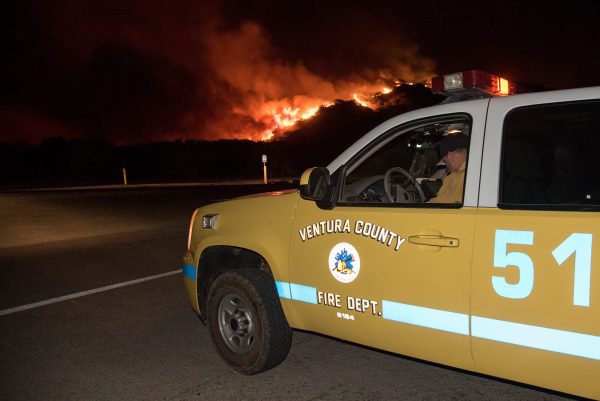 Jensen, a wildland firefighter for 29 years, had never seen a fire expand so quickly. “The wind was blowing embers across the main roads and there were spot fires behind us and above us,” he said. “We were off to the races.”

Jensen headed back down into the city of Santa Paula proper with Burris to take the Operations Section position. “As equipment was coming in, we were trying to keep track of resources and where everything was assigned,” he said.  After about 40 or so minutes they transitioned out to a Branch position when a Type 1 Operations Chief from within the agency arrived and took over.

Just 45 minutes into the response, they received word that a separate fire had started further up the canyon, near the community of Ojai. Firefighters now had two rapidly spreading fires on their hands, and both called for major resources. “Some of the equipment in route to the original fire was diverted to the new start – we were trying to get as much equipment to both fires as quickly as possible,” said Jensen.  It was nearly midnight by the time the first 10 of the requested strike teams of engines (five engines each) arrived from outside agencies to help.  “We were so shorthanded for the size and rate of spread of this fire, we were spreading resources dangerously thin to protect what we could,” according to Jensen.

In a matter of hours flames had engulfed thousands of acres. “The way the fire leapfrogged over mountain tops…It moved at a pace I’d never seen before in my nearly three decades of experience,” said Jensen. “A typical wildfire would probably take a week to travel that far and this fire took six hours.”

Firefighters were trying desperately to stay ahead of the fire and, most importantly, to evacuate communities in the path it was burning. In October 2017, fires in Napa and Sonoma County spread more rapidly than anticipated, killing 44 people and destroying 245,000 acres. Authorities were heavily criticized for not sending out widespread notifications of the fire’s movement.

“I think that if it wasn’t for the Napa fires, we wouldn’t have had the level of respect for the speed this fire was travelling,” Jensen said. “We learned lessons from Napa to get our evacuation distances out farther than we have in the past.” 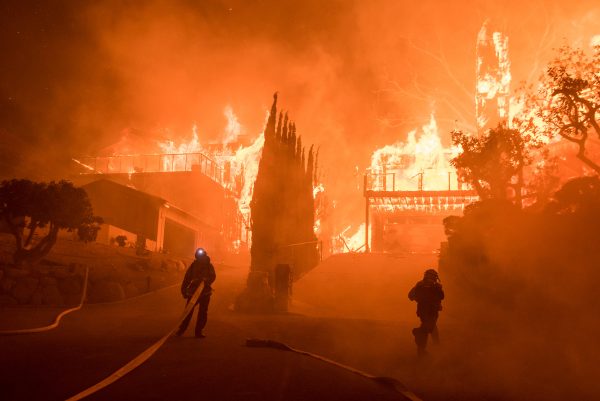 However, many residents refused to abide by voluntary evacuation requests. This was an extra obstacle for fire service personnel who then had to spend time notifying people when the fire was headed directly for them. “Our priority is life, then property, then the environment,” said Jensen. “When you’re stuck on the life part, you don’t have the resources or the time to deal with property.” There were numerous reports of people being notified and rescued from their homes that were burning around them undenounced to occupants on the inside.

The second day of the fire, Jensen was part of the command team as a Division stationed in Ojai, and the small community of Oak View. This area has homes scattered along the hillsides and more defined neighborhoods down in the flat area along the creek bed.  There was little activity that morning and afternoon as firefighters monitored homes in the community. But at 4pm, as it began to get dark, the call came across the radio that fire was advancing quickly towards the neighborhood and was crossing the creek bed.  Within 45 minutes, a terrifying fire storm was blowing across the main road, taking with it homes and building structures.

“It went from nothing—calm—to houses on fire and propane tanks blowing like huge torches,” recalled Jensen. “I was just shocked. We tried to bring in more resources to save what we could, but the hillside was fully ablaze.”  The fire had multiple spots on the hillside ahead of the fire impacting the lower neighborhood.  It had jumped above and behind many of the resources standing ready for the fight.

The Thomas Fire destroyed a lot of property – on the first night, 500 homes were destroyed in Ventura County alone. In total after nearly six weeks, the fire would destroy 1,063 structures, damage 280 more, and burn 281,893 acres, according to CAL Fire.

The speed and power of the wildfire was beyond what firefighters could contend with. Under those circumstances, one engine had 5 or 6 houses to deal with. “You have to prioritize which one to put out and unfortunately they aren’t all going to make it,” said Jensen. “You also have to ask yourself: Is putting out that house the best place for you, or should you be another block down, knocking on doors and getting people out?” 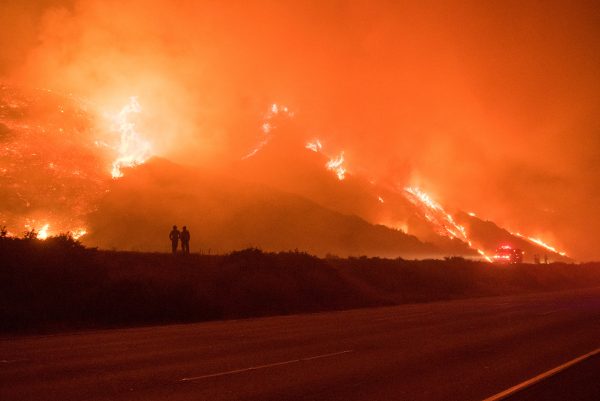 In a matter of hours, flames from the Thomas Fire engulfed thousands of acres. | Photo: R. Collum

Considering the strength and scope of the fire, it’s remarkable that there were only two fatalities from the Thomas Fire—a woman killed in a car accident while fleeing the fire, and a firefighter who was overcome while fighting the fire.

Jensen continued to work the Thomas Fire on 24-hour shifts, every other day, until Christmas Eve. After Christmas he worked 12-hour days, assigned to extinguishing the natural oil seeps that had caught fire. That assignment ended on January 7. Jensen was one of 8,500 of firefighters who worked day and night to contain the Thomas Fire – the largest mobilization of firefighters to combat any wildfire in California history.

The fire was officially contained on January 12. In the latter days of the fire, Jensen flew in a helicopter over the fire path. “It was very shocking to look at it from the air and see the distance the fire covered in less than three hours,” he said. “It was truly unbelievable.” 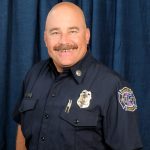 About Peter Jensen: Captain Peter Jensen of the Ventura County Fire Department has been an “all-risk” firefighter for 29 years and is currently serving as the department’s Hazardous Materials Officer. He earned a Master’s degree in Emergency & Disaster Management from American Military University. To contact him, please email IPSauthor@apus.edu.