Report Finds Growth in Number of Militia and Patriot Groups. What are the Impacts on Law Enforcement?

The Southern Poverty Law Center recently released its annual report “The Year in Hate and Extremism,” which focuses on the number of hate groups and domestic-terrorism organizations in the U.S. 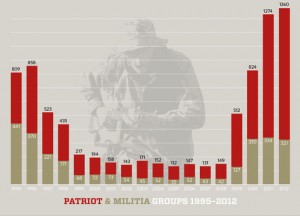 Mark Potok, the author of this report, attributed the explosive growth of such “Patriot” groups to the election of the country’s first black President. The racial prejudice coupled with the fear that President Obama plans to take away people’s guns was only fueled by the Sandy Hook school shooting, which brought national attention to the gun debate and resulted in a major increase in gun and ammunition sales. With President Obama well into his second term, Potok predicts the President’s agenda and his focus on gun control and immigration reform will only fuel these hate groups.

In addition to gun-control fears, the SPLC found that a factor in the expansion of the radical right over the last decade can also be attributed to a more mainstream acceptance of conspiracy theories. The SPLC report finds there have been more than 100 domestic radical-right plots, conspiracies and racist rampages since the 1995 Oklahoma City bombing.

What does this report mean for law enforcement agencies? Are you concerned about the rise in militia and antigovernment groups? Are you seeing more such activity in your jurisdictions?