Preparing For Life After The Fire Service

When I joined the fire service at the age of 21, I had two goals. My first goal was to provide at least 30 years of quality service. My second goal was to pursue training and education opportunities and seek to rise in the ranks within the department. Both these goals matched my responsibilities as a husband and father as they would allow me to provide for my family into retirement.

Now the question is: Are you ready for Plan B? What are you doing to prepare for your next career?

Six years ago, during my department’s last contract negotiations, at the last minute the city and department reached an agreement to avoid arbitration. At the time, it was feared that arbitration would have resulted in a change to or even elimination of medical benefits at retirement. Shortly after that scare, I had a conversation with a classmate named Dave who is the same age and has young kids the same age as my son.

We made an agreement to both be better prepared at the next contract negotiation.

Dave and I are both second-generation firefighters who love what we do. I chose to stay on the fire suppression line and was recently promoted to Assistant Fire Chief.

[Related Article: From Firefighter to Administrator: What It’s Like to Work Upstairs]

Dave spent his career in the EMS division and is currently a Rescue Captain who will be a great nurse in his second career. We both love the job just as much today as we did as recruits in 1988. We both considered this career a “calling” and we frankly are not ready to leave. Unfortunately, we are torn between two passions: our love of family and our commitment to the fire service.

The Role of Education
True to our agreement, I completed my master’s degree in Emergency and Disaster Management from American Public University in June 2012. Both of us have kept our promise to be professionally in a better career position. As fathers and husbands, we both agree that our ultimate responsibility is to make decisions that are in the best interest for the future of our families, even if that means leaving our role as firefighters prematurely.

Now is the Time to Prepare
The significance of sharing this experience with others is to shed the light on the importance of education. Six years ago, the two of us made a commitment that we would not dare break. Dave will be a successful nurse somewhere doing work that he enjoys while at the same time providing for his three children as they approach college. In addition to completing my master’s degree, I have been blessed with the opportunity to serve APUS as a coordinator for Fire and Emergency Services Outreach and now I have had the opportunity to meet and talk to public safety professionals about their “Plan B.”

The importance of public safety professionals pursuing their education cannot be overemphasized in our world today. Dire financial circumstances and curtailed budgets are the reality in many municipalities throughout the country. The pact that Dave and I made six years ago was life changing and I believe a wise investment: We are much better prepared today to succeed both personally and financially. We prepared for Plan B! 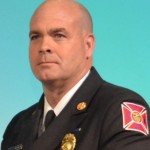 About the Author: James McLaughlin has been in fire services since 1988. He has a B.S. in Fire Safety from Providence College and a M.A. in Emergency & Disaster Management from APUS. He has numerous training experiences including the National Fire Academy as well as a fellowship at the John F. Kennedy School of Government at Harvard University. Professional affiliations include the International Association of Fire Chiefs, New England Association of Fire Chiefs and the International Association of Firefighters. He is currently the Fire & Emergency Management Education Coordinator at American Military University.