Nuclear Bomb Shelters Double As Wine Cellars, Cinemas And Nightclubs For Your Home

According to some experts, personal household bomb shelters will soon be a part of most custom home buildouts in the United States and are already available in many homes in countries like Israel, Switzerland, Finland, and Singapore. For years the prepper community has been making detailed plans for survival in a world of terrorism and nuclear threat, and with the increase of natural disasters, tornados, hurricanes, earthquakes, and wildfires, these shelters provide additional security for your family. In fact, several resorts including Richard Branson’s Necker Island retreat in the Caribbean relied on personal shelters during recent hurricanes to protect their staff and animals. 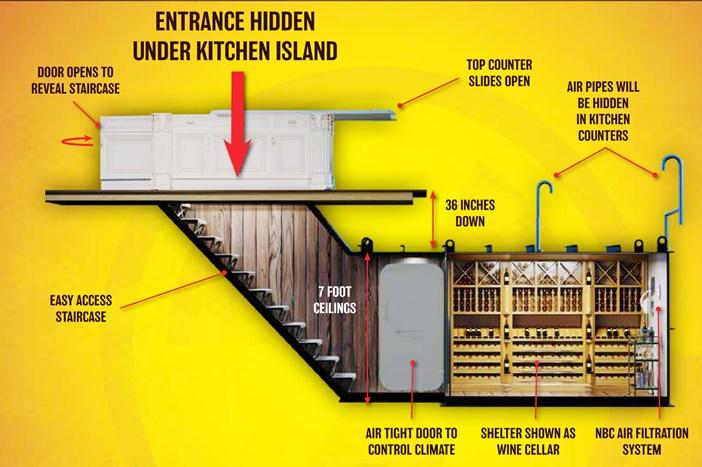 Detailed layout of the shelter built under the kitchen 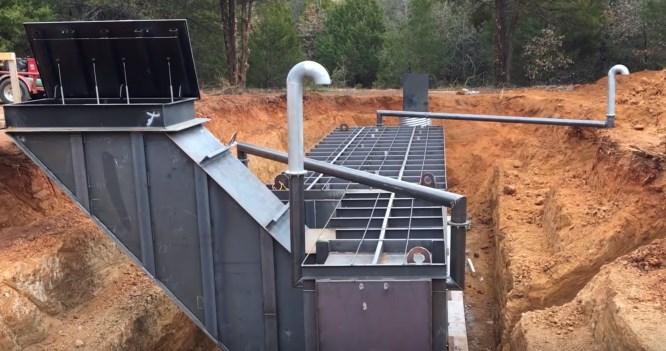 Actual new build installation of the bunker at a private estate

A few custom home builders have told me that their clients are requesting secret safe rooms for their high-end customers and firms like Atlas Survival Shelters help create custom buildouts with a major wow factor. I spoke with Atlas Survival Shelters President Ron Hubbard, and he tells me that the demand for multiple use shelters is on the rise. He offers a super popular Winenado series that doubles as a wine cellar and bomb shelter in one. 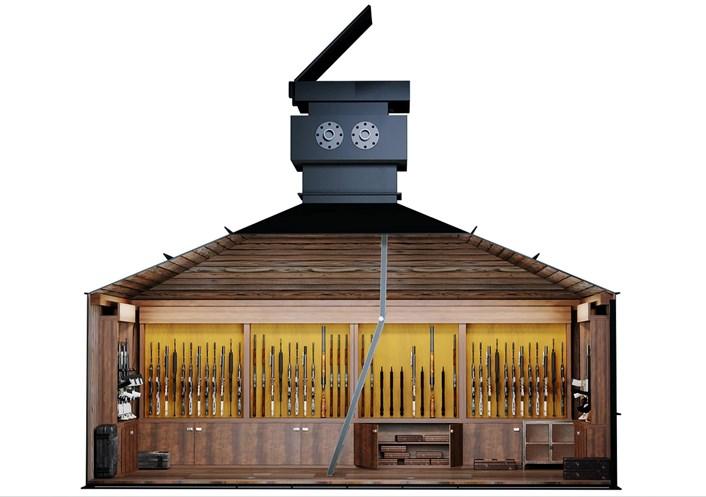 Atlas Survival Shelters designs and manufactures over 20 different styles of protective shelters all with different budgets. From modest shelters for your garage all the way up to luxurious underground bomb shelters for the rich and famous.  These shelters are gaining popularity as multi-functional space such as a climate controlled wine cellar to underground gun storage rooms and even nightclubs and playrooms.

Prices for the custom shelters are also becoming more affordable and range from a basic $10,000 option to a luxurious $100,000 custom escape. The company has even designed a hardened concrete underground bunker with a swimming pool and bowling alley for one client. 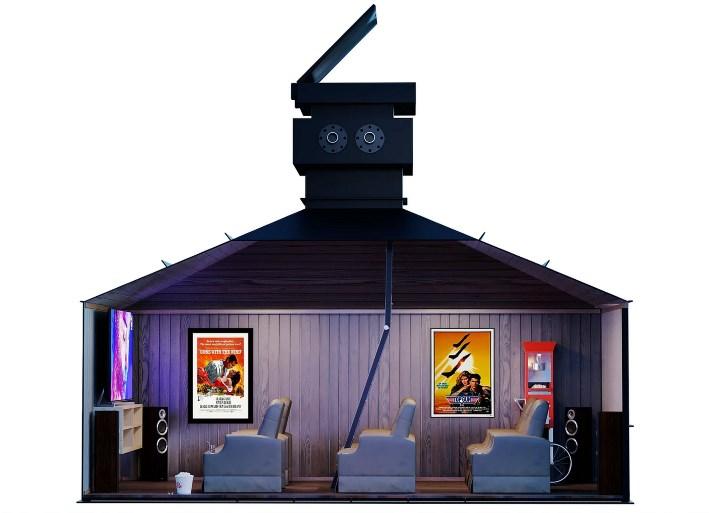 One great feature of the Nado shelter series is its design that allows for installation in existing homes. The shelter unbolts into four parts, allowing the sections to clear a 7’ tall garage door opening, then each section lowers into the hole for re-assembly under the floor. If the seams are welded after installation, this shelter will be classified as watertight and is acceptable for Florida building codes. For new home constructions, the shelter is installed in pre-slab, which also allows for the secret hatch to be placed in the master bedroom closet, or hidden behind a false wall. 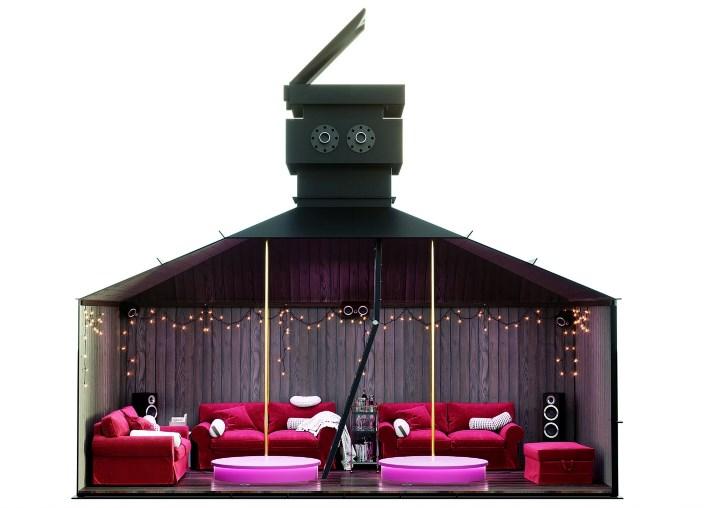 Shelters include a custom fabricated ladder entry, an 8-ton hydraulic hatch-lift for emergency egress, and many other customized options. All shelters in the Nado Series are priced without the beds, couch, and toilet so that owners can custom design the space to use as a wine cellar, gun room, panic room, or just for storage. Buried 14 feet below the surface, the average temperature in the shelter is 60° which makes for the perfect climate controlled wine cellar. The bunker is also built to FEMA P-361 standards and is an all-in-one fallout shelter, safe room, and tornado shelter. 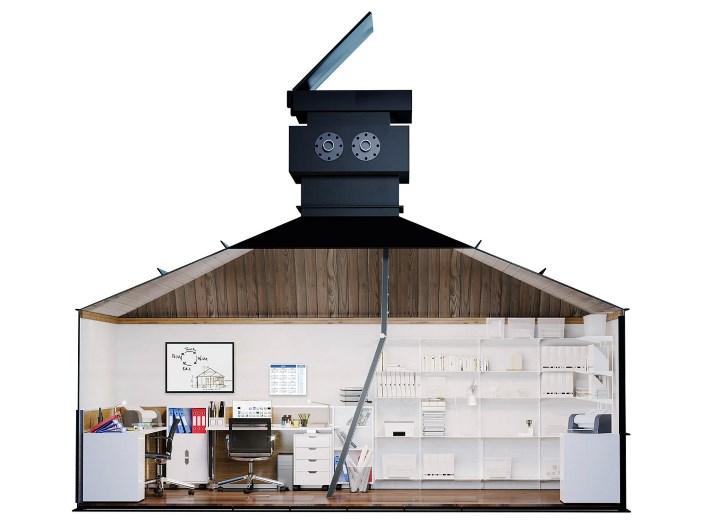 Bomb shelter doubles as an office

Hubbard tells me that the popular bunker he offers is the WineNado series that installs underneath the kitchen island pre-concrete slab and can be designed as part of homeowners plans when building their new home. “The shelter can be ordered with or without an NBC Air Filtration System depending on whether you want it to be a wine cellar only or a wine cellar with NBC capabilities as well as protection from tornadoes or hurricanes,” he says. “WineNado does not come with a hatch at the ground level, but if you decide to install it in the backyard, you can add a hatch at an additional cost. The shelter is made of 1/4” steel plate and structurally supported with 6” C channels. WineNado is buried exactly 36” below the finished concrete slab. In high water tables, you would need to backfill with concrete to create ballast, so there is no threat of the shelter having lift. Depending on where you live in the USA, you will need your engineer to approve the design and stamp the drawings.” 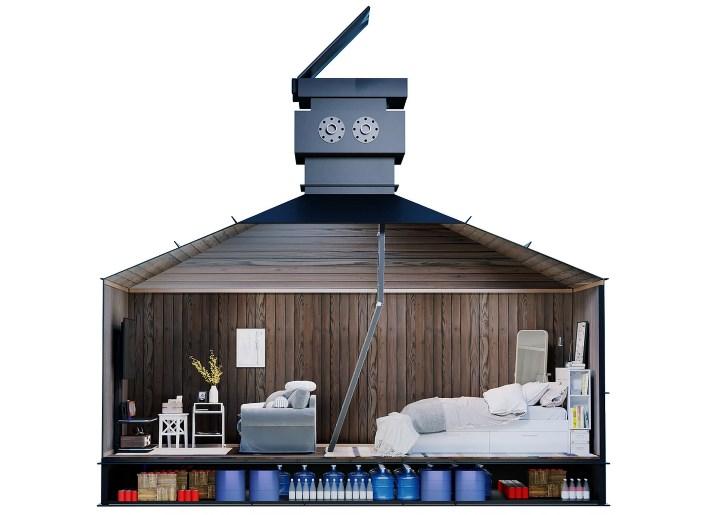 Among the air filtration systems that Atlas offers, Hubbard uses a Swiss-made VA150 NBC Air Filtration System. “This military grade air system is installed in all the large Atlas Survival Shelter models,” he says. “The air system is wired in 110 volts for the USA, or per your requirements outside of the USA. In case power is lost, this system has a manual crank to keep overpressure in the shelter. The manual crank is so easy to use that a 6-year-old girl can operate it. It is extremely quiet and moves 177 cubic feet of air per minute of unfiltered air or 88 cubic feet per minute of filtered air. An overpressure blast valve is included with all systems with a 30 PSI rating. The way an overpressure blast valve works is if a blast occurs, the overpressure blast valve will close due to the exterior pressure caused by the blast. The valve will close for the brief second the high PSI goes above 1 PSI. This valve will close if any exterior matter tries to enter the shelter.” Prices for the custom shelters start at $18,999 for an 8×8 space, to $34,999 for an 8×20 space with three beds. 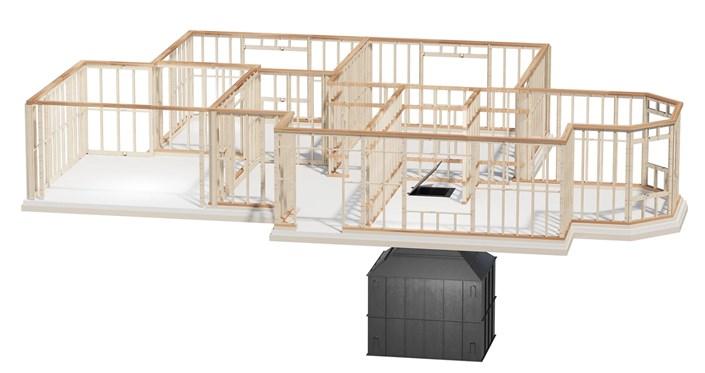 Installation layout of bomb shelter below the house

This article was written by Jim Dobson from Forbes and was legally licensed through the NewsCred publisher network. Please direct all licensing questions to legal@newscred.com.