Looking Beyond the Uniform: How Trooper Weaver’s Death Shook the Law Enforcement Community

On Friday, December 30, 2016, as many of us were preparing to celebrate the New Year over the long holiday weekend, Pennsylvania State Trooper Landon Weaver was shot and killed. At just 23-years-old, Trooper Weaver was killed while investigating a domestic dispute, namely a violation of a protection from abuse order in Juniata Township, which is located in Huntingdon County, Pennsylvania.

Trooper Weaver was the 136th law enforcement officer killed in the line of duty in 2016. According to a report by the National Law Enforcement Officers Memorial Fund, this is the highest number of fatalities on the job in five years. Nearly half of those killed were fatally shot, including 21 police officers who died in different ambush-style attacks carried out across the country. 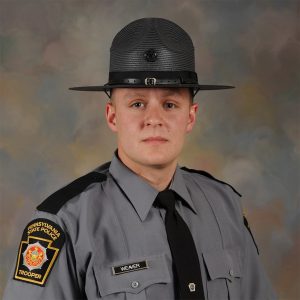 Having spent nearly 30 years as a criminal justice practitioner and educator, each of these murders saddens and angers me. As a Pennsylvania resident myself, Trooper Weaver’s death particularly affected me. He’d been a state trooper for just over a year and leaves behind a young wife. Although I did not know him personally, many of my friends are Pennsylvania State Troopers and many of my students have gone on to become state troopers. Looking at Trooper Weaver’s picture in full uniform, I see my students and graduates.

[Related: Healing Divisions Between the Police and the Public]

Every law enforcement officer, correctional officer and probation/parole officer enters into this line of work knowing the potential dangers they will face over the course of their careers. Yet we each chose this profession in order to serve our communities and create a positive change in what can sometimes appear to be a chaotic world filled with acts of senseless violence. First and foremost, an officer’s duty has always been to serve and protect complete strangers, including those who might dislike or try to do us harm simply because of our uniform.

Following a number of high-profile police shootings, a growing anti-police sentiment is believed to be the reason for an increase in attacks on officers. While there are certainly bad apples in law enforcement as there are in any profession, we have to be conscious of how the media can misrepresent facts. Bad news is naturally reported more than good news, but we shouldn’t let this discount from the good deeds that take place day after day. Although we must address every mistake and act of misconduct appropriately, we cannot let them let them eclipse how most officers are committed to fulfilling a remarkable duty, all while knowing it could cost them their lives.

People can often fail to see past the uniform to the individual who wears it. Officers are not just defined by the roles they serve within various public safety fields. Like anyone else, these are individuals with dreams and aspirations beyond their chosen professions. They come from different backgrounds, hold different religious and cultural beliefs, were raised in different neighborhoods, and embrace different customs and traditions. They belong to families as sons and daughters, mothers and fathers, husbands, wives, and friends. At the end of each shift when the uniform comes off, they are no different than you and I.

I have seen firsthand the strong bonds of fellowship that are created in the public safety community. When an officer is killed in the line of duty, departments from all across the country will attend the funeral. Trooper Weaver’s death was no different and more than 1,000 law enforcement officers participated in his funeral procession.

[Related: Recognize the Sacrifices of All Police Officers]

Trooper Weaver’s death will undoubtedly have a ripple effect in that it will continue to affect and alter many lives. It has hit the law enforcement community especially hard to lose someone so young and with less than two years on the force. Strangers, friends, family members, and officers from across the nation mourn his death because it raises concerns about our society’s safety and security. If our officers are subject to attack because of a distorted perception of what the uniform represents, all of society suffers.

Rather than judging all officers by what we read in the news, we must learn to look beyond the uniform to the person. We rely on our officers to confront volatile and dangerous situations on our behalf, but we should also remember that each officer is also an individual. This is the first step towards reconciling police-community relations and building a safer society for all.

About the Author: Dr. Michael Pittaro is a 28-year criminal justice veteran, highly experienced in working with criminal offenders in a variety of settings. Pittaro has lectured in tertiary education for the past 14 years while also serving as an author, editor and subject matter expert.