Look, Don’t Judge Me By My Desk 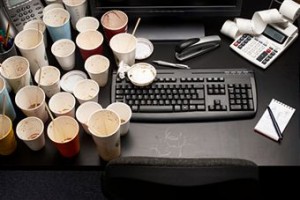 There’s an old adage, cluttered desk, cluttered mind. Maybe there’s a shred of truth to that but as I look at my desk—Yikes! “Hello, Merry Maids, I need help.” Look, we all got a lot going on. The last thing we need is to actually believe the myth that the current state of our desk is a reflection of our state of mind. Heck, some of my most productive days resulted in a whirlwind of papers, coffee cups, and crumpled notepads. However, I do keep a clean and organized office, not to create a false impression, but more so to make others feel comfortable and welcomed. If I have to move a few files or erase a brainstormed whiteboard, so be it.

What about the opposite? When can extreme and compulsive tidiness in the office space become a reputational liability?

The easy answer is when it appears you have either too much time on your hands for the amount of work you have to do or that Mr. Belvedere must be living in your cubicle at your beck and call. And as much as I’d like to daydream about Coleman from Trading Places serving me the world’s greatest lunch at my desk every day, ultimately, I’m more concerned about what’s getting accomplished at my desk rather than what’s on it at any given moment.

Talking to colleagues in another industry and organization, I was shared a recent tale of a prominent executive who didn’t last long due to personality issues. He also happened to have painstakingly set up in his executive office with replications of major battles in U.S. history, and yes, it included hundreds of miniature soldiers. After the executive was told to move on, the most common characteristic still discussed was not his performance—but his odd décor. This story pales in comparison to the Merrill Lynch CEO who decided to move forward with lavishly redecorating his personal office to the tune of over $1 million after the company received a government bailout on the taxpayers’ dime. These examples are extreme, but they do illustrate that sometimes ultra vanity applied to one’s personal workspace can sometimes be a side effect of a much greater issue—being out of touch.

So before you send Martha Stewart over to coordinate my paperclip jar and stapler according to my color chart, let’s just agree that in the workplace we’ll focus on not judging each other based on our workplace décor, but rather, on the work we accomplish together. Unless of course your office is decorated with minions of therapy finger puppets—that’s just weird. Pez dispensers are okay. Not that I’m judging.

J. Thompson is the Vice President of the Content team at American Public University. He earned an M.F.A in Screenwriting from the American Film Institute in Los Angeles and performed his undergraduate studies in English literature, political science and business management between the University of New Mexico and East Carolina University. His career insights draw upon experience as a communications vice president supporting learning management, applicant tracking, and talent and leadership development for Bank of America and other Fortune 500 firms.

Can You Recognize a Phishing Attempt When It Happens?

Why So Many Managers Resisted the Shift to Remote Work