Editor’s Note: This article is part of an ongoing series about how different aspects of forensic science can help during death investigations. Read about rigor mortis and entomology (the science of analyzing insect evidence).

The body is the key piece of evidence in death investigations, including the most obvious circumstance of homicide, but also in suicides and accidents because it holds many forensic clues about the method and cause of death.

These clues are crucial during the investigative process. One element that helps death investigators determine a window for the time of death, and sometimes the cause of death, is postmortem lividity, also called livor mortis.

What Is Livor Mortis and How Can It Assist Investigators?

Livor mortis, which is Latin for “bluish color of death,” is a change in the skin color following death. This phenomenon results from blood settling in capillaries, due to the cessation of circulation. The changes in lividity are most pronounced and easiest to observe in Caucasians and other fair-skinned people.

The blood-settling process has phases that can be observed from one hour to the next, starting soon after death. In the first few hours following death, faint red patches appear on the parts of the body closest to the ground due to the effects of gravity.

These patches increase in intensity and, at its peak, lividity results in a widespread reddening or purpling of the skin. For example, if a body was found hanging as a result of suicide, the hands, forearms, feet, and lower extremities would be significantly redder due to the pooling of blood in those areas.

Lividity becomes “fixed” approximately eight to 12 hours after death. In the hypothetical suicide mentioned above, the reddish/purplish color on the lower parts of the extremities would remain visible, even when the body is placed in a lying position on the floor. This coloring characteristic provides investigators with a substantial visual clue about whether the body was moved after death.

One way to determine whether lividity is fixed is to press a thumb into an area of the skin where lividity is visible. Applying pressure to the skin creates a white void known as blanching.

If the blanching remains after pressure is released, lividity is not fixed, as seen in the image below. If lividity is fixed, the area remains the same reddish/purplish color because red blood cells have burst, leaking blood into the surrounding areas. 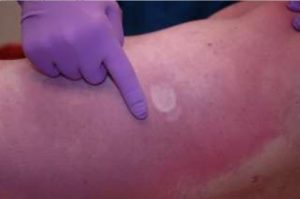 Clues from livor mortis have helped to solve many criminal cases, including the death of two-year-old Evangelina Wing from Seaside, Oregon. When first responders arrived at her home, they found the toddler unresponsive and lying on her side on a bed.

[Related: How Case-Based Learning Can Build Enthusiasm for a Forensic Science Career]

However, livor mortis was fixed on her backside, indicating that her body had been moved many hours after death (and that her death had not been immediately reported). The fixed lividity was one of many clues that pointed to the toddler having been subjected to abuse over a long period of time. Ultimately, Evangelina’s parents were convicted of her murder.

Livor mortis also played an important role in the murder of Hae Min Lee, which is likely a familiar name for fans of the podcasts Serial and Undisclosed. Her body was found buried in Leakin Park, near Baltimore, Maryland.

According to her autopsy report, livor mortis evidence showed that Lee’s body had been moved many hours after her death. Livor mortis was fixed evenly on the front of her torso, but her body was found on its right side in the ground. Obviously, Lee had lain in a prone (on her stomach) position for many hours prior to being transported to her burial site.

Though not an actual photo of Lee’s body, the image below shows how her legs likely looked with livor mortis fixed on the front side. The white blanching areas in this photo are where the skin had contact with some surface for an extended period of time.

The livor mortis evidence in the Lee case might actually play a role in reversing the trial outcome and life sentence of her convicted killer, Adnan Syed. The prosecution’s top witness claimed Syed placed Lee’s body in the trunk of her own car after killing her and later took the body (the accounts of what time this happened differ) to bury it at Leakin Park.

If this is true, her body could not have remained in that trunk for many hours, as claimed by the prosecution. The livor mortis did not match that version of events. Lee’s body had to have lain in a flat, prone position for several hours after she was murdered. Her body was then moved, after lividity was fixed, and buried on its right side.

Understanding the phases of livor mortis provides investigators, coroners, medicolegal death investigators, and homicide detectives with important forensic evidence. Such evidence can assist in determining an approximate time of death, whether the body was moved several hours after death, and whether an eyewitness’s or suspect’s statement is factual.

However, being familiar with livor mortis is also useful for first responders and police officers. It’s a solid indication as to whether to attempt CPR. A body showing clear signs of lividity will not respond to resuscitation efforts.

Ultimately, livor mortis, combined with many other factors, provides investigators with a clearer understanding of how and why a person died. These additional factors will be discussed in future articles. 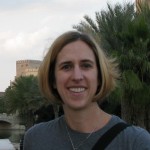 Jennifer Bucholtz is a former U.S. Army Counterintelligence Agent and a decorated veteran of the Iraq and Afghanistan wars. She holds a bachelor of science in criminal justice, a master of arts in criminal justice and a master of science in forensic sciences. Bucholtz has an extensive background in U.S. military and Department of Defense counterintelligence operations. Bucholtz has also worked for the Arizona Department of Corrections and Office of the Chief Medical Examiner in New York City. She is currently an adjunct faculty member and teaches courses in criminal justice and forensic sciences. Additionally, she is a sworn civilian investigator for the El Paso County Sheriff’s Department and host of AMU’s investigative podcast Break the Case. You can contact her at Jennifer.Bucholtz@mycampus.apus.edu.