Lessons Learned from #myNYPD: Is There a Silver Lining?

What has transpired in the last 24 hours on the New York Police Department’s Twitter account (@NYPDNews) will likely be studied by social media and public affairs’ departments for years to come.

The NYPD social media people posted what seemed like an innocuous request to its Twitter followers: Post pictures of yourself with officers and use the hashtag #myNYPD. 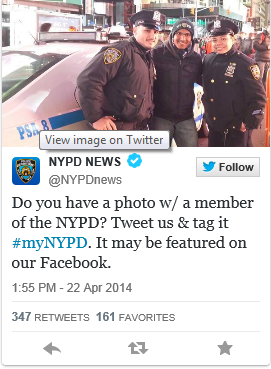 Well, the outcome was not exactly what the department was looking for. Dozens of pictures were tagged displaying less than savory images of police officers engaging with citizens. But there were positive posts too (which @NYPDNews retweeted, of course).

This incident did not remain an NYPD issue either. People in other cities started tirades against their own departments, like #myLAPD and #myCPD.

The question becomes: Should the social media folks at NYPD have known better? Was this a foolish oversight? Or was this a reaction that few would have predicted?

In retrospect, it’s important to know your adversaries. If something like this was posted to a small- or mid-size city’s Twitter account, it probably would have gotten mostly good feedback. But in NYC, which historically has a very tumultuous relationship between citizens and law enforcement, it was less likely to go over well (which now seems so obvious). The social media people at NYPD failed to consider the worst-case scenario of this posting and were quickly (and painfully) reminded about the power of social media.

However, could there be a silver lining to this case?

The viral uproar that exploded across the Internet brought a lot of attention (mostly unwanted) to the agency, but as a result more people are following @NYPDNews. Having additional followers means the NYPD can reach even more people and inform them when there are actual law enforcement events like Amber Alerts, missing persons, or other investigations where public input is needed. After the ink is dry on the social media expert’s “lessons learned” case study, the NYPD will have an even louder voice to reach its citizenship, whether those same people actually like them or not.

What are your thoughts? Could something good come from this debacle? Once this started going viral, could the agency have done something else to address it? Any insights?