Is Human Trafficking the Human Rights Issue of our Era?

The news is often filled with stories of sex trafficking, forced labor, domestic work, forced adoption, and even the illegal trade of human organs. While these are often seen as separate criminal issues, these are all forms of human trafficking and need to be addressed in a coordinated way.

“Human trafficking is a gross violation of human rights and I believe it is the human rights issue of our time,” said Dr. Mohamed Mattar. Dr. Mattar is the executive director of The Protection Project, a human rights institute based at The Johns Hopkins University School of Advanced International Studies in Washington, D.C. 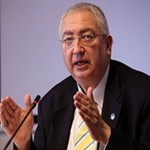 In addition to his executive role, Dr. Mattar has spent the last 14 years teaching courses in human trafficking. He has also participated in drafting the United Nations model law on trafficking in persons.

On November 17th, Dr. Mattar will present his research, Human Trafficking in the Middle East: The Scope of the Problem and the Appropriate Responses, during the Together Let’s Stop Traffick summit in Charles Town, W.Va.

“I believe this is a problem that requires intensive efforts, tedious efforts, comprehensive efforts, and cooperative efforts,” he said. “We need countries to come together to pay attention to this problem and we need to form national committees to establish action plans about how to best address this problem.”

One of the primary objectives of the Together Let’s Stop Traffick summit is to build the world’s first fully integrated global resource center to combat human trafficking. This center will help collect and share intelligence from the around the globe, as well as share best practices to help individual countries fight trafficking within their borders.

What are the Challenges to Combating Human Trafficking?

Here are just some of the issues that impede the fight against human trafficking around the globe.

At this point in time, Dr. Mattar believes the U.S. public is aware of the problem and is pleased that there is an effort to share best practices and learn from other countries about what is working and how to replicate those strategies around the world.

To hear Dr. Mattar speak about these issues and more during the Together Let’s Stop Traffick summit, register for the summit today.