How the 2020 Election May Be Decided By 3 States Again

Note: The opinions and comments stated in the following article, and views expressed by any contributor to In Homeland Security, do not represent the views of American Military University, American Public University System, its management or its employees.

Major upsets in Wisconsin, Pennsylvania and Michigan swept President Donald Trump to victory four years ago, and a similar scenario may play out in 2020 – but in three different states. And, in a mammoth irony, the coronavirus pandemic and the country’s college student population may each play a role in getting the president re-elected.

Will the Pollsters Get It Right in 2020?

Former Vice President Joe Biden is the favorite to win the 2020 presidential election according to most polls, but so was former Secretary of State Hillary Clinton in 2016 when President Trump was elected. Are the polls to be believed this time around? Even Biden himself is warning that the pollsters and pundits may be wrong again, despite reassurances from polling organizations that they have fixed the issues that embarrassed their industry in 2016.

This year’s election has a much different complexion than in 2016. Biden is polling higher in the swing states than Clinton did, and he’s running against a president whose approval rating has yet to rise above 50% since his January 2017 inauguration, according to Gallup. Biden also has an opponent with a presidential track record and report card to refer to and tear apart, and he has the most – and easiest – pathways to the magic tally of 270 electoral votes needed to win. However, Trump has a few narrow and unexpected routes he can navigate to another surprise win.

Students play a role in electing presidents, and they are expected to vote in high numbers this year. There are significant undergraduate populations in all of the swing states including Minnesota, Florida, Texas, New Hampshire, Pennsylvania, Arizona, North Carolina, Iowa, Michigan and Ohio. All of these states, except for Minnesota and New Hampshire, went to Trump in 2016. This year, the deadline to register to vote has passed in all but one of these battleground states, and only Iowa, New Hampshire, and Texas do not have rules on their books requiring some duration of residency before Election Day.

However, due to COVID-19, U.S. colleges and universities have reported that undergraduate student enrollment is down 4% in 2020 compared to 2019. There is also a reported 8% drop in community college enrollment. This summer, millions of students decided to stay at home and not risk contracting the coronavirus by showing up on campus in the fall.

For in-state college students, there is no effect on voter turnout in their state, but what about the out-of-state students who would normally register to vote – and cast their votes – in their college town? Presumably, a lot of them are instead registered to vote – and will cast their votes – in their home state. Subsequently, since a vast majority of millennial college students vote Democratic, Biden’s vote count may be considerably lower than expected in crucial swing states – and other states – with high student populations.

Minnesota is another example. The state recently reported a 6% drop in enrollment in colleges and universities. The University of Minnesota in Minneapolis/Saint Paul had more than 51,000 students enrolled in 2019. Again, as in New Hampshire, numerous students who normally would cast their votes in Minnesota are instead doing so in other states. Clinton won Minnesota by 44,593 votes (1.5 percentage points) in 2016 – but her win was largely due to overwhelming support for her in Hennepin County – which is home to the University of Minnesota.

It is unknown how many displaced students there are in each state, but what does all of this mean for the 2020 race for the White House? Here is how the electoral college map looks if we assume that the “solid” and “strongly leaning” states come through for each candidate. There would then be 162 electoral votes up for grabs: 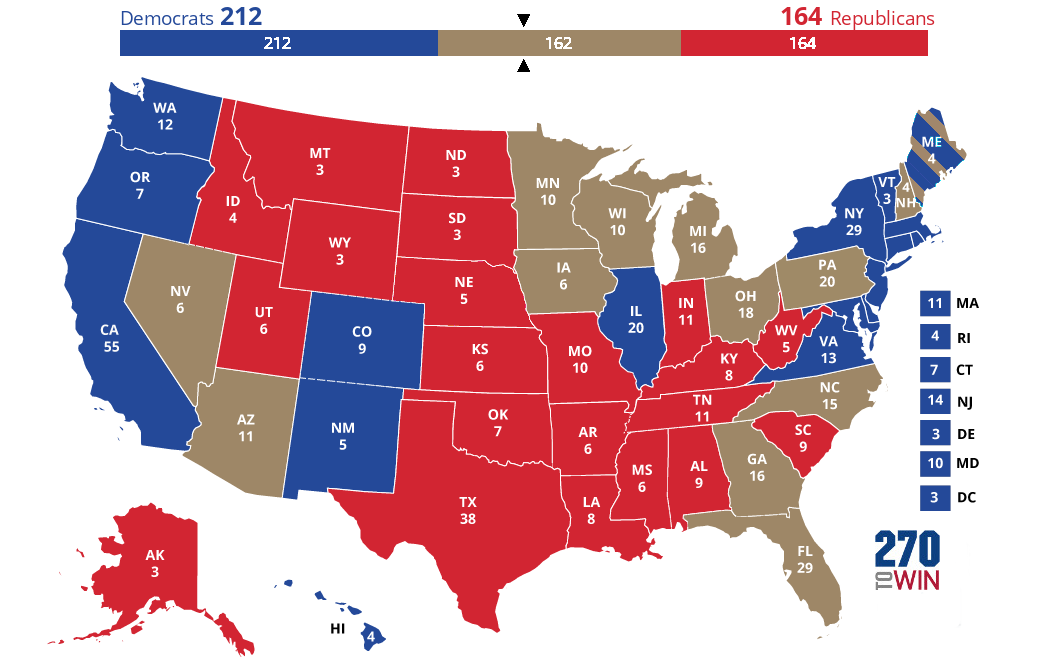 The Trump camp thinks otherwise, but Biden will likely take back Wisconsin. Michigan and Pennsylvania are getting tighter, while Maine will likely be a repeat of 2016 with three electoral votes going to Biden and one to Trump. Florida, Ohio, Iowa, North Carolina and Georgia are all trending toward President Trump and – if history is still a valuable precursor – he should win each of them. Assuming all of that comes to fruition, the resulting electoral map would look like this: 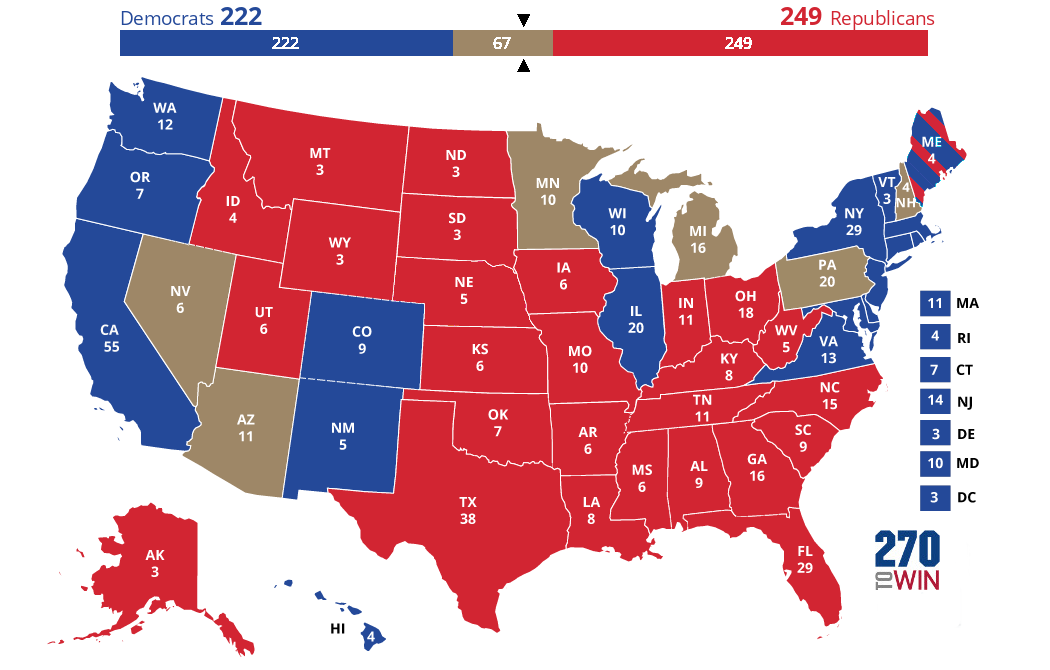 Nevada, Minnesota and New Hampshire were all blue states in 2016, while Arizona voted with the GOP that year and in all but one election since 1952. The early 2020 polls showed Biden winning easily in Arizona. Realistically, however, a state that has voted for the GOP presidential candidate in 16 out of its last 17 elections, will likely do so again. Let’s assume that the polls are correct and Biden wins Michigan and Pennsylvania – even with those two states, and regardless of how Arizona ends up, President Trump’s three new favorite states are Nevada, Minnesota and New Hampshire. It’s no wonder that he has spent a lot of time in each of them in recent weeks. Here’s why: 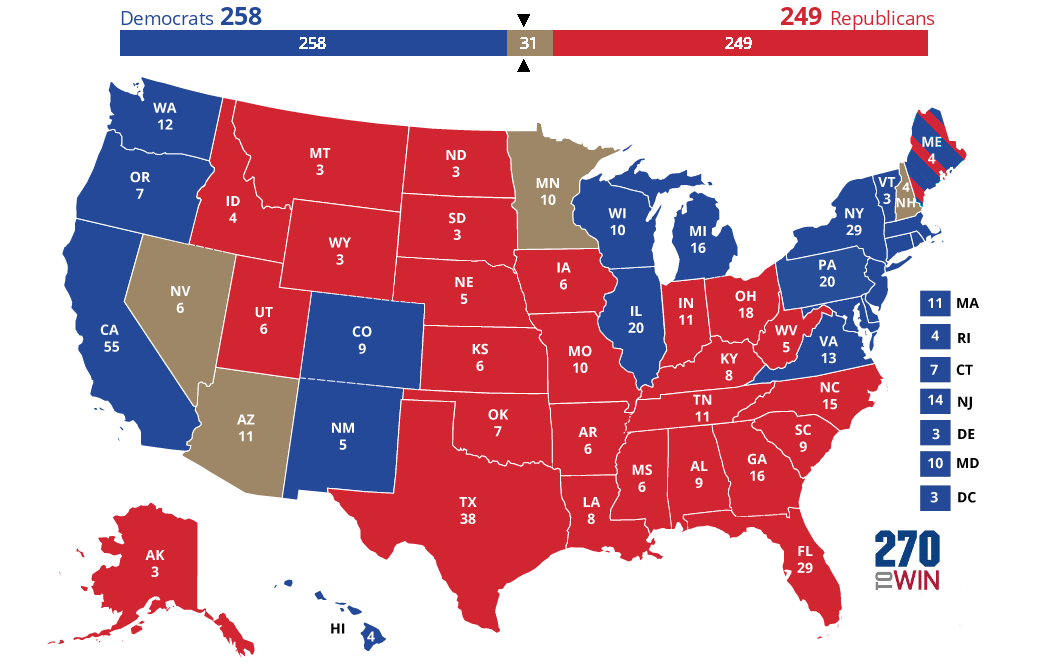 There are several combinations that will lead to a 269-269 Electoral College tie this year, especially if Arizona swings to Biden. However, a tie would still result in Trump’s re-election because if neither candidate attains 270 electoral votes, the House of Representatives would decide the contest under a somewhat intriguing system that involves the incoming 2021 House voting by state delegation. The 12th Amendment to the Constitution outlines the process in which a simple majority of congressional state delegations is required to elect the president – and the majority of state delegations in the upcoming newly elected Congress will undoubtedly remain with the Republicans. Assuming each delegation toed the party line, Trump would win.

Putting the nightmarish prospect of an Electoral College tie aside, here is how Minnesota, Nevada, and New Hampshire fared four years ago (including Libertarian candidate Gary Johnson):

In each state, Trump needs a two- to three-percentage points swing in his favor to take the valuable electoral college votes. If Trump wins Nevada and New Hampshire, he would get to exactly 270 electoral votes and win the election without needing to worry about Minnesota – a state which has voted Democratic in every election since 1932 except for three and last voted for a Republican in 1972. Trump is confident that he can win all three.

Another Popular Vote Loss For the Election’s Winner?

One thing is almost certain: if Trump wins the electoral college, he will not win the popular vote — becoming the first president to do so in consecutive elections.

[Related: Is it Time to Retire the Electoral College?]

The presidential election in 2020 is unlike any other. The record numbers of mailed-in ballots is unprecedented and uncharted territory – and if the vote tallies are close on Election Night, who knows what types of legal battles will ensue.

Ultimately, however, this year’s election might come down to something that nobody would have predicted one year ago: a Trump victory due to the displacing of the student population in response to a national and global pandemic – the same pandemic that many pundits believe is more likely to be his downfall on Election Day.