How Company Officers Can Become Better Counselors and Comrades

When deciding to become a firefighter, there are many things to consider such as not earning a very big paycheck, interrupted sleep routines, physically demanding responsibilities, and an unwavering desire to serve one’s community any time day or night.

However, what’s often overlooked is how many different hats firefighters will be asked to wear. At some point in a firefighter’s career, he or she will be a mechanic, babysitter, animal control officer, HVAC technician, appliance technician, and traffic controller.

This is just a short list of some of the roles firefighters play when working with the public; they take on many more roles in the firehouse. For example, the driver engineer is an expert on apparatus; the logistics chief is well-versed on all of the department’s vendors; and the rookie typically knows where anything and everything is located on the rig or around the station. In general, firefighters must be highly adaptive and versatile individuals to take on so many different roles.

However, one area of expertise that rarely gets enough attention, or personnel dedication, is the role of mediator or peer counselor. It is vital that every department has individuals who can counsel others and be a confidant to fellow firefighters, and company officers have a responsibility to take on this unofficial role.

The Unofficial Role of Company Officers

The company officer is one of the most versatile roles in the fire service and also one of the most demanding. Middle management in any organization can be challenging and this holds true in the fire service. Company officers are often looked up to by rookies, but also looked down upon by the department head. Despite the challenges of managing expectations and demands from both ends of the spectrum, a company officer’s most important role is that of a leader.

Leadership itself requires many different skillsets and one skill that’s often overlooked is being a counselor to subordinates. The role of counselor can be complicated and depend largely on the scenario and the individual needs of personnel.

In some cases, counseling may come in the form of leading a post-incident group discussion where a minor mistake was made, like a botched hose deployment. In other cases, a firefighter might need a trusted confidant to talk about a personal matter like an impending divorce. Regardless of the scenario, as long as it is not illegal, immoral, or life-threatening, the company officer should attempt to handle every situation to the best of their ability and provide help to that individual.

The role of counselor requires company officers build trust among personnel. In my own experience, I have had many subordinates confide in me about very serious matters because I have proven my integrity by not airing their business. There have been many times when I did not have ready fixes for their problems, but instead offered my best advice and an open door.

Being a good counselor also means helping firefighters recognize the sources of their stress. It is often believed that stress is primarily caused by the calls personnel respond to. While this can certainly cause post-traumatic stress and acute stress response, most long-term stress that results in depression, anxiety, and sometimes suicide, is actually from the accumulation of multiple stressors, both in and out of work. In addition to high-stress emergency situations, stressors can include working long hours or financial insecurity due to low pay.

Helping others identify and manage stress is an important role of the company officer as counselor. They should constantly remind subordinates that if they need to talk about anything, no matter how minor it may seem, the door is always open.

Company officers must learn how to read their people the same way they would read smoke at a house fire or visible symptoms of a patient. It’s important to notice early on when a firefighter seems “off.” When a firefighter exhibits strange or uncharacteristic behavior, they should be confronted in a non-threatening, open, and caring manner.

It’s very important for company officers to be understanding and respectful when they address sensitive situations. For example, if a usually boisterous and engaging firefighter is suddenly quiet and reserved, do not say, “Hey Bob, why are you acting all pouty and quiet today?” in front of the whole crew. Instead, wait until you catch him alone and ask him sincerely, using eye contact, if everything is okay or if they need to talk. Being sincere and wanting to help can put him at ease and hopefully open up about any issues he’s dealing with.

Playing the role of an “informal counselor” is a heavy responsibility for company officers. However, if you prepare yourself to have difficult conversations, understand the delicate nature of personal circumstances, and genuinely want to help your fellow officers, it’s the most important role a leader can have.

Being a company officer is a great honor and responsibility, but before taking on the role, firefighters need to know that there is more to it than making decisions on the fire ground and a pay raise. Company officers are looked up to and trusted to help others in more ways than one. Anyone can go to school and become a counselor, just like anyone can study and pass the promotional process, but it takes someone who is sincere and truly cares about their people to become a successful leader. 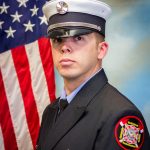 About the Author: Brad Bouchillon has been working for the City of Statesboro Fire Department for 10 years full-time and is currently a Captain. He has also worked as a Lifeguard for Tybee Island Ocean Rescue and as a part-time EMT for Screven County EMS. Brad holds a Bachelor’s Degree in Psychology with a specialization in Crisis Counseling. He is also starting his Masters of Arts program in the fall of 2018 in Human Services Counseling with a Crisis Response and Trauma Cognate. He is married to his wife Megan of five years and they have a two-year-old son and another boy due July 2019. To contact the author, please email IPSauthor@apus.edu. To receive more articles like this in your inbox, please sign up for In Public Safety’s bi-monthly newsletter.