Honoring Officers Who Go Above and Beyond

Recent high-profile events in Baltimore and Ferguson have caused public outcry regarding questionable ethical and moral practices by police officers. These stories have negatively affected the relationships police have in some of the communities they serve. While it is important that these wrong-doings are acknowledged and punished, such incidents should not detract from all the good police officers do each and every day for the citizens in their communities. 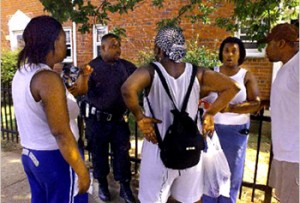 The vast majority of officers join the force and remain dedicated to the mission of protecting and serving. Officers believe strongly in what they do and conduct themselves in a professional manner and with the utmost integrity each and every day.

Amid the media frenzy of recent events, there are many people speaking out in support of police officers and of the policing profession. For example, a 22-year-old African-American man made a video that went viral discussing his positive encounter with a white police officer in South Carolina. “People need to understand that not all officers are crooked,” Will Stack said in the video. “Not all officers are racist, bad people. And not all people who get shot or tased or arrested by officers are innocent victims.”

To ensure that the good deeds of officers do not go unnoticed and in honor of National Police Week, here are just a few stories of officers who go above and beyond the call of duty for the citizens of the communities they serve:

There are numerous other stories of officers reaching out to people within their community. The list is extensive, but here are a few such actions:

These stories are not unique. There are numerous other stories that could be shared about officers who go above and beyond the call of duty.

In honor of National Police Week, be sure to thank an officer for all that they do. Not only do they risk their lives each and every day to help protect and serve, but many officers do not hesitate to lend a helping hand to citizens in their communities.

About the Author: Michael L. Beshears has two B.S. degrees, one in psychology and another in criminal justice from Drury University. He also has two graduate degrees, a M.S. in criminology from Indiana State University and a M.A. in health services management from Webster University. He also obtained a PhD from Northcentral University. Mike is a retired senior noncommissioned Officer in the U.S. Army. His 22-year career includes work with the Special Forces, as well as assisting other agencies in their performance of criminal investigations. He has an extensive background in emergency medicine and intensive care medical treatment, as a Special Forces medic, emergency medical technician and licensed practical nurse. Mike is currently an assistant Professor of criminal justice at American Military University & American Public University and is full-time faculty in the School of Security and Global Studies. You can contact him at Michael.beshears(at)mycampus.apus.edu.