Veterans returning from World War II and their successors have three men to thanks for, among other benefits, their ability to further their education on the GI Bill. Only one of the three men is a household name, President Franklin D. Roosevelt. The other two less-known men are Harry W. Colmery and John Gibson.

As late as 1939, a Gallup poll showed that although 74% of Americans supported sending the Allies food and other supplies to win the war in Europe, 84% rejected the idea of joining the fight against Germany. All that changed of course on December 7, 1941, with the surprise Japanese attack on Pearl Harbor, Hawaii. Soon thousands of American men and women were in uniform.

Roosevelt served as Undersecretary of the Navy during World War I and he remembered how shabbily the U.S. government treated returning soldiers and sailors.

The assimilation of World War I veterans back to civilian life didn’t go well. With so many men flooding the labor market, many couldn’t make ends meet, even with some help from government programs, including payment of $20 for 52 weeks.

A study in 1921 estimated that 76,000 American veterans had been officially diagnosed with shell shock, a term created during the war to explain the effects that exploding shells had on soldiers’ senses.

Posters designed by the Army by artist Gordon Grant instructed how America’s veterans should behave once they returned to civilian life. A New York Times article said the posters were “evidence of the nation’s blindness to the toll modern warfare took on those who endured it. The Army didn’t want the flood of veterans returning home to become a disruptive presence or a financial burden on society.” 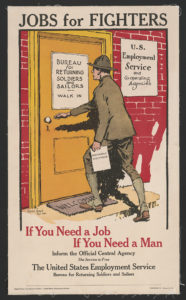 “The men depicted in the posters, with their bright smiles, angular chins and confident demeanors, are a stark contrast to some of the real men struggling to readjust to civilian life,” The Times noted. “The Army’s tone-deaf messages” undoubtedly struck a nerve for people … who felt that coming home from war was akin to being catapulted into a different place and time, where nothing was easy. There was more to reintegration than simply having the right attitude.”

Congress passed the Bonus Act of 1924, which promised veterans a cash bonus based on the number of days they had served. But the bonuses wouldn’t be paid until 1945. So, during the Great Depression, around 20,000 frustrated veterans—known as Bonus Marchers—marched on the Capitol in June 1932 demanding their bonus money. The government didn’t capitulate. President Herbert Hoover sent the Army to disperse the marchers, a move that pitted soldier against veteran. “The confrontation would be an integral turning point in the crusade for veterans’ rights.”

However, the return of millions of veterans during and after the war gave Congress and President Roosevelt a chance at redemption. The lessons learned were translated directly into support programs — including the Servicemen’s Readjustment Act of 1944, better known as the GI Bill.

Enter Harry W. Colmery, a former national commander of the American Legion and former Republican National Chairman. The Kansas lawyer is credited with drawing up the first draft of the GI Bill. As the story goes, Colmery sequestered himself in a room at the Hay-Adams hotel near the White House and worked diligently on a template that Congress could use to write a bill.

According to the American Legion magazine, the solution was “an omnibus bill that would not only give those veterans health care, hospitals and all veteran services under one federal Veterans Administration but also college, career and home-ownership opportunities through free tuition and no-down-payment, low-interest mortgages.”

The bill was introduced in the House on January 10, 1944, and in the Senate the following day. Both chambers slowly approved their own versions and they moved to a conference committee for a compromise version in June. That’s where the trouble began. Both sides of the conference committee agreed on the education and home loan benefits, but they were deadlocked on the unemployment provision. The deadlock lasted through Friday, June 10, and into the evening.

Under the rules, a bill would die if a majority of the members from each chamber did not agree.  The conference committee’s seven senators voted unanimously for the compromise version. A majority of the seven House members also had to agree, but the six attending representatives were evenly split, three for and three against. So the seventh vote – that of Georgia Representative John Gibson — could pass or kill the bill as the deadline for agreement neared.

The Statesboro Herald of Georgia reprinted a passage from Michael J. Bennett’s 1996 book, “When Dreams Came True, the GI Bill and the Making of Modern America,” which tells the rest of the story.

Gibson, a second-term congressman, had returned to his home in Douglas, Georgia, a couple weeks earlier to recuperate from an illness. Before heading home, Gibson had given authority to fellow Democrat Rep. John Rankin of Mississippi to cast his vote by proxy in favor of the bill. Now recovered, Gibson arrived home late, unaware that the G.I. Bill, which he supported, was in any danger. When he stepped out of his car, he heard his telephone ring and ran into the house. It was the local operator calling, telling Gibson she was going to patching him through to the Atlanta Constitution newspaper.

With wartime restrictions on telephone service, the Constitution editors had used their newspaper clearance to place calls throughout the state in search of Gibson. City, county and state police stopped cars on the roads between Douglas and Valdosta, where he reportedly had been visiting. Radio stations WSB in Atlanta and WGOV in Valdosta broadcast constant appeals to anyone knowing Gibson’s whereabouts.

On the phone a Constitution reporter described the situation to Gibson and said the American Legion commander for Georgia would pick him up in a few minutes; priority travel plans had already been authorized.

“You bet I’ll get to Washington,” Gibson reportedly barked. Almost immediately he saw headlights turn into his yard and he and the driver sped out of town as rain began to fall. Florida police met the congressman’s car at the state line and supplied a high-speed escort to the Jacksonville airport. There he boarded a waiting Eastern Airlines plane, said to have been personally arranged by Eastern Airlines’ owner, World War I ace Eddie Rickenbacker.

The propeller-driven flight “was long enough for Gibson’s temper to simmer and reach a boil.” Rankin, as House chairman, an avowed segregationist and racist, had blocked passage of the legislation by refusing to cast Gibson’s absentee proxy vote.

At 10:00, Saturday morning, June 10, Gibson “marched into the committee room and thundered, ‘Americans are dying today in Normandy in the greatest invasion in all history. I’m going to hold a press conference after this meeting and castigate anyone who dares to vote against this bill!’”

Perhaps it was Gibson’s strident call to patriotism so soon after D-Day that unblocked the logjam. The conference committee passed the legislation 14-0. For the rest of his life, Gibson acknowledged special satisfaction with his last-minute victory on the G.I. Bill.

Two weeks after the vote, President Franklin Roosevelt signed the GI Bill into law. Since then, as the Statesboro Herald recorded, “billions of dollars in benefits have helped millions of veterans reenter civilian life, thanks in part to the midnight ride of John S. Gibson”

Ultimately, Rep. John Gibson of Georgia was rushed in to cast the tie-breaking vote. The Senate approved the final form of the bill on June 12, and the House followed on June 13. President Franklin D. Roosevelt signed it into law on June 22, 1944.

David E. Hubler brings a deep background of government, journalism and teaching experience, which includes an impeccable career serving as a senior editor at the Central Intelligence Agency at posts in the U.S. and around the globe. David is an accomplished researcher and published author. In 2017, Rowman & Littlefield published the paperback edition of David’s latest book, “The Nats and the Grays, How Baseball in the Nation’s Capital Survived WWII and Changed the Game Forever.”

Gordon Grant Image Featured in Article: “Jobs for fighters – If you need a job, if you need a man, inform the official central agency” – Poster showing a soldier holding his “Honorable Discharge,” crossing a welcome mat to pass through door of “Bureau for Returning Soldiers and Sailors.” By Gordon Grant, Capt. U.S.A. 1919 Library of Congress Control Number 2002712342, Public Domain.

How Long Can This New Israeli Coalition Government Survive?

Juneteenth: Why Quick Access to Timely Information Is Vital

The Wellness Crisis in Corrections: What Can We Can Do About It?