A small group of officers from the Daytona Beach Police Department (DBPD) stood together—some stared intently down at a screen on a handheld control station while others looked curiously up at the sky. These officers were carefully guiding unmanned aircraft systems (UAS)—commonly referred to as drones—around the Daytona Beach area, conducting pre-storm drone flights. The drones, DJI Phantom and DJI Inspire, were equipped with high-definition cameras taking pictures and videos of the current condition of the area.

Hurricane Irma was headed toward the coast of Florida, predicted to cause widespread and massive damage. Once Hurricane Irma made landfall, DBPD officers would then conduct post-storm UAS flights to measure the amount of damage.

Providing high-definition video and images from drones serves multiple purposes during a natural disaster. First and foremost, it helps a department know what areas were hit the worst and where first responders are most needed. Pictures and videos taken by the drones after the storm enable the department to quickly identify downed power lines and blocked roadways without putting any personnel in harm’s way. The DBPD’s drones were also equipped with video equipment to live-stream video straight to the police department, providing officers with real-time information about the damage.

The second benefit for collecting information from drones is that it can help streamline FEMA funds and reimbursement. High-definition images and video provides essential evidence for FEMA, proving the extent of damage to different areas.

What it Takes to Put a UAS Program in Place

When Hurricane Irma hit, DBPD’s UAS program was very new. We were still working on the basics of the program, but, fortunately, the department had recently secured a Certificate of Authorization (COA) from the FAA to operate unmanned aircraft within Class C airspace, which encompasses most of the Daytona Beach area. This certificate meant that even though the department didn’t have all its UAS policies fully developed when Irma hit, it was able to conduct drone flights. 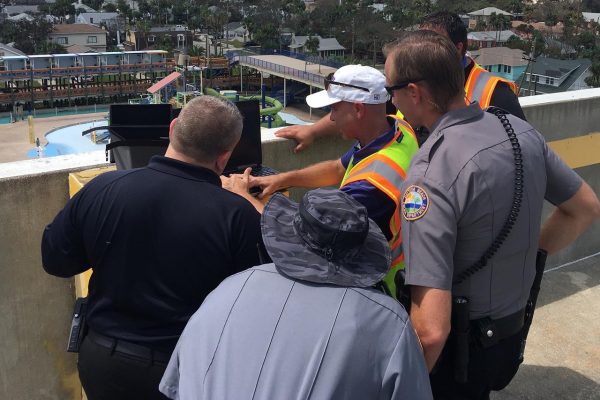 The initial development of the UAS program had started in June, when agency leadership approached me about helping them start an UAS program. When I first met with Chief of Police Craig Capri, I asked him why he wanted to add UAS operations to the agency. He stated the primary reasons were to conduct search and rescue missions and disaster management operations, which included storm damage assessments.

At the time, the department had just experienced a tragic situation where an elderly man left a nursing home and was missing for several weeks. Despite an exhaustive foot and air patrol search, the man was found dead, less than a mile away from the facility. This incident was the impetus that sparked Chief Capri’s desire to integrate drones. Had the department had access to drones, they could have conducted a more thorough, near-ground aerial surveillance effort around the neighborhood, searching for the missing man. In addition, hurricane season was just a few months away and Chief Capri wanted to havethe capability to quickly and accurately assess damage within his jurisdiction.

There wasn’t much time to get all the pieces in place before hurricane season, but, fortunately, I had started laying the groundwork for a UAS program back in 2012. At that time, budget constraints forced the project to be put on hold while the agency sought other means for financial support. Now, the agency had secured new funding from drug forfeiture funds and was ready to pick up where we left off.

Understanding the Complexity of a UAS Program

After listening to Chief Capri’s objectives for a UAS program, I explained the scope of the integration. It wasn’t about buying a few drones and training select officers how to operate them. Starting a UAS program is a complex and multifaceted process that requires adding an aviation unit within the department. An aviation unit is a major commitment for a department, requiring proper funding, policy development, manpower, and ongoing training in order to support a professional and effective program.

[Related: FAA Addresses Threats of Drones to the Nation’s Airspace]

Chief Capri understood the complexity of the process and the support required. I explained that the following were the basics needed to add a fully functional UAS aviation unit to the agency:

A UAS program also requires extensive and ongoing training for officers. There are five types of training needed for a successful program:

An agency also needs to select the most-qualified officers to train. Considerations should include officers who have:

The aforementioned listed items are the bare minimum needed to make a UAS aviation unit functional and it can take three-to-six months from the initial concept phase to implementation. It can take a considerable amount of time to make a program operational because of budget restrictions, personnel selection, jurisdiction issues, community acceptance, FAA cooperation, and challenges implementing a comprehensive training program.

Getting a UAS Program Off the Ground

When determining whether a department should create an aviation unit and operate drones, it must take into account several considerations.

Aircraft Selection
UAS come in many shapes and sizes. Small unmanned aircraft is defined by the FAA as aircraft weighing less than 55 pounds on takeoff, which includes everything onboard or attached to the aircraft such as camera systems.

Agencies must decide what type of aircraft to purchase. Many agencies make the mistake of first purchasing an aircraft and then trying to match the aircraft to the mission. Instead, they should identify all mission objectives for the UAS system and then find the specific aircraft that matches the needs.

Cost of the Program
Aircraft ranges in price from $500 to $40,000 per unit. The price depends on the sophistication of the drone and its ground station, as well as the attached sensors and equipment. For example, high-resolution cameras can take images that can be used to identify individuals by location, color of clothes, and some biological features (skin and hair color), according to the Justice Technology Information Center (JTIC). However, less-expensive, lower-resolution cameras cannot identify faces, license plates or other fine details. The cost of the equipment on a drone depends heavily on how an agency wants to use the system.

Earning Community Support
One of the major challenges facing any public service agency looking to integrate UAS in their operations is community concerns. In contemporary times, many communities do not have full faith in their local public agencies for numerous reasons. Drones in particular are the target of general fear and skepticism. One of the first steps that must be accomplished is to get community acceptance. To do this, you must include the community in all aspects of the decision-making process.

The agency must also commit to having complete transparency about its program. This was made abundantly clear when the Seattle Police Department did not include its community in the integration process and did not address any community concerns. As a result, Seattle continues to face opposition from members of the community regarding its drone program.

One recommendation is to create a website that houses all the information about the program. This provides the public, and the media, with quick and easy access. The website should include a frequently asked questions (FAQs) section to help answer common questions about the program. Each agency should conduct an annual review of the program and report on all activities involving unmanned aircraft systems. This should be included on the website to increase the transparency of the program. Daytona is currently updating its website with drone information.

While DBPD’s UAS program is still very new, it has already benefited the Daytona Beach area. Before and after Hurricane Irma hit, the department flew 13 flights over a three-day period. The information gathered was imperative to the agency’s response to the storm and helped it focus its recovery efforts on the most heavily impacted areas. As the department hammers out best practices around this emerging technology, these efforts have been educational for officers and the public alike, demonstrating the benefits of UAS on the local level. 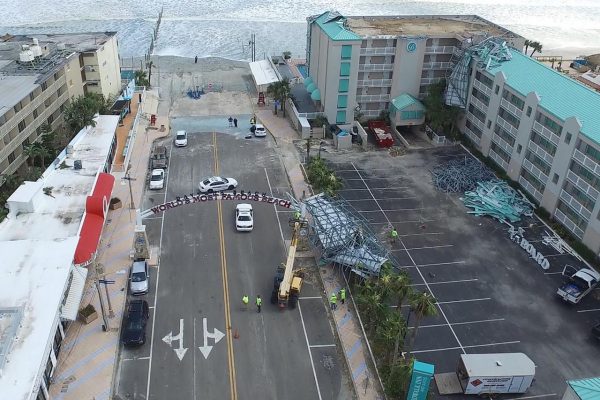 Another recommendation is to use your local media in a positive manner to introduce your intentions to your local community. Prior to the DBPD’s launch of the program, we contacted the media to address concerns from the public. The agency intends to keep the community involved throughout the operational phase of the program as well. (Watch a video of the DBPD’s media briefing.)

About the Author: Anthony Galante is a former SWAT officer and current law enforcement officer with more than 11 years of dedicated service. He is a commercial pilot with a remote pilot certificate and holds a Master of Aeronautical Science degree from Embry Riddle Aeronautical University and is a graduate of American Military University (M.A. Homeland Security, M.A. Criminal Justice). Galante is currently an assistant professor with American Military University. To contact the author, send an email to IPSauthor@apus.edu.