One of the most persistent fashions in military circles is predicting the demise of the aircraft carrier. It has become an article of faith among many analysts that the world’s biggest warships can’t hide in an era of precision-guided missiles and reconnaissance satellites, and it’s just a matter of time before some upstart military power like China proves the point. The more colorful accounts of why carriers will be a waning factor in warfare describe a “line of death” in the seas near China that can’t be crossed without courting catastrophe.

No doubt about it, carriers and the other warships that accompany them in a strike group constitute a lucrative target set. Losing even one of the Navy’s ten carriers would be a national trauma. However, these concerns have been around for a long time; Donald Rumsfeld was talking about them during his first run as defense secretary in the 1970s. There hasn’t been much hard evidence during the intervening decades that carrier vulnerability is increasing. The Navy invests heavily in applying cutting-edge technology to the defense of its carrier strike groups — making them among the most densely defended assets in the world.

What is increasing is the utility of carriers in responding to a growing array of global challenges. Roughly 80% of the world’s population lives within a hundred miles of the sea, so having a fleet of floating air bases that can destroy hundreds of targets per day for months at a time without requiring access to land facilities is useful. In fact, large-deck, nuclear-powered aircraft carriers are the signature combat systems of the U.S. military — a capability uniquely suited to America’s global security role.

This isn’t just rhetoric: the Chief of Naval Operations testified last week before Congress that his carriers can barely keep up with the tempo of demand from combatant commanders in places like the Middle East and Western Pacific. He figures carrier deployments should last about seven months to be sustainable, but they’ve actually been averaging nine months — which is wearing out both the ships and their crews. So if demand signals are any indication, reports of the carrier’s demise are greatly exaggerated. Here are five reasons why the Navy’s flattops will become more important to U.S. security in the future, rather than gradually relinquishing their role. 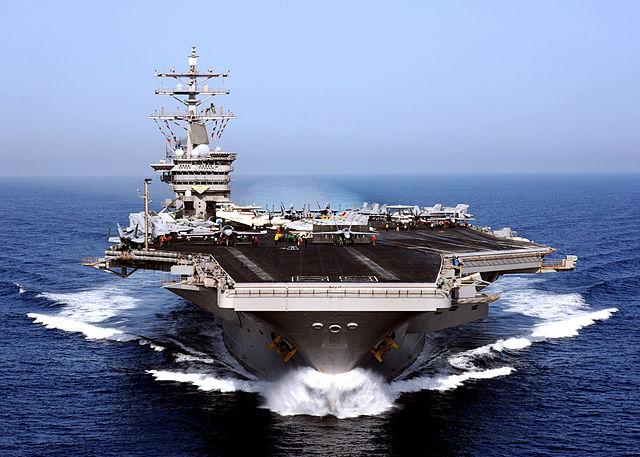 No other country in the world has a fleet of large-deck, nuclear-powered aircraft carriers like the USS Dwight D. Eisenhower, pictured above. Displacing 100,000 tons of water and standing over 20 stories high, these vessels are the biggest warships ever built. (U.S. Navy photo by Mass Communication Specialist 2nd Class Rafael Figueroa Medina/Released)

Carriers are more survivable than land bases. The notion that carriers are losing their warfighting value because they are vulnerable is almost comically wrong. They are much more survivable than the overseas bases on which the Air Force and Army would have to depend for the simple reason that carriers are always moving. The location of every U.S. land base in Eurasia is well known to adversaries, and in a major war the most critical bases would quickly be wiped out. Aircraft carriers, on the other hand, move so fast they can outrun submarines, so keeping track of where they are is not easy. In wartime, carrier strike groups would keep hostile aircraft (including drones) at bay, and quickly disable enemy targeting systems.

Carriers are becoming more capable. The Navy is building a new Ford class of carriers that will generate 300% more electricity than existing carriers while increasing daily aircraft sortie rates by about 25%. The really big change in the near term, though, is introduction of F-35C joint strike fighters on carrier decks which can fly 40% further than legacy aircraft without refueling. The greater reach of the F-35C, combined with stealth that makes it invisible to radar and networked sensors to enhance situational awareness, will make carriers and their air wings more lethal, more survivable.

Carriers are becoming more available. In the years since the Cold War ended, the number of carriers in the active fleet has decreased while the demand for their overseas deployment has increased. As a result, the percentage of the carrier force deployed each year has risen from less than 20% to over 30% — a rate that cannot be sustained once the time needed for training and maintenance is figured in. The Navy is taking two steps to assure carriers will be available to regional commanders when needed. First, an optimized Fleet Response Plan will better reconcile the competing demands made on carriers. Second, the number of carriers will increase when the USS Ford joins the active fleet in 2021. This should allow a return to sustainable rates of deployment.

Carriers are more economical than alternatives. Because aircraft carriers last for 50 years, the Navy only needs to buy one every five years to sustain its current fleet — which works out to about six hours of federal spending annually. The cost of keeping three carrier strike groups (with destroyers and subs) continuously deployed overseas is a fraction of one-percent of federal spending. But the cost of waging war by other means could be much higher. The Air Force needs a basing network everywhere it might fight, since unlike carriers land bases can’t be moved. And the smart bombs carrier-based aircraft use to destroy targets cost $25,000, whereas a cruise missile would cost $1.5 million to destroy the same target. Multiply the latter number by thousands of targets, and you’re talking real money.

Carriers are more politically acceptable than alternatives. If the Air Force and the Army are going to have the regional basing infrastructure required for them to sustain a military campaign, Washington may need to make deals with a lot of unsavory local leaders. Even after agreements have been inked, there’s no way of knowing whether unfettered use of bases will be permitted in any particular contingency. Relying on sea-based forces to prosecute a war effort largely eliminates these political problems, so the U.S. does not end up subsidizing leaders who are corrupt or oppressive in order to execute its strategy. Current aircraft carriers can launch nearly 200 aircraft sorties per day if necessary, which is comparable to having a major base ashore — without all the difficulties.

When you add up the many advantages that large-deck, nuclear-powered aircraft carriers confer on U.S. warfighters, it is not hard to see why they are likely to remain the centerpiece of America’s global military posture. They have unlimited range, they can quickly be moved wherever they are needed, they deliver enough offensive punch to defeat most adversaries quickly, and they are less vulnerable to preemption or political controversy than land bases would be. Although threats are increasing, carriers are exceedingly difficult to sink and the likelihood most enemies could even find them, much less penetrate their layered defenses, is small. The only immediate danger to the carrier fleet is that Washington will drop the ball on funding new construction.

Huntington Ingalls Industries, the nation’s sole builder of aircraft carriers, is a modest contributor to my think tank.

This article was written by Loren Thompson from Forbes and was legally licensed through the NewsCred publisher network.

The Current State of Israeli-Palestinian Relations