Fire Stations Should Match the Needs of the Community

This article first appeared on EDMDigest.

In times of economic decline, we rush to cut pay and perhaps close fire stations. However, as the economy recovers, we see a resurgence in communities trying to take advantage of lower rates of interest on borrowed funds and passage of tax levies to rebuild or relocate fire stations.

This is great for the community, but many times municipalities are looking for guidance on where to move fire stations to optimize their use for the community. While this seems like an easy project that would require only some GIS mapping, there are many other factors tied to this decision.

An expert should be sought for any full-length discussion on this topic. After all, a fire station could cost as much as $10 million. It’s a decision that the community will have to live with for 50 years.

Not as Simple as Mapping a New Location

It might seem that all we need to do is map out the station’s location and measure the percentage of the city that the station’s four- and eight-minute zones would cover. However, there are many more issues that are intertwined with the number and location of these stations. Those issues include budget, staffing, apparatus, hazard analysis and others.

For example, if opening a new station means that fire companies have to cut one firefighter on each apparatus due to budget constraints and increased operating costs, that reduction actually is a significant disservice to the community even if the apparatus can arrive three minutes earlier due to its new proximity to the incident.

While many might say that if the new location even with one less firefighter saves a life, the cost is worth it. That thinking might seem appropriate. But if doubling the cost reduces the police force, prevents roads from being repaved or closes parks, the overall quality of life is reduced for the community.

I will be the first person to speak out for the need for proper protection. But the reality is that many of the places that need increased fire and EMS protection are precisely the areas that produce the least tax dollars and are not capable of raising more.

The only option is to hire and retain less expensive firefighters and paramedics. This is likely unfair since these people have a high-risk job and need to provide for their families.

Enter the ultimate quandary. Some solutions are response models that utilize more fire companies to provide rapid response to both fire and EMS incidents and allow the reduced number of ambulances to serve as transportation for the EMS care. Other options include regionalization in which you spread the expense of fire and EMS protection over a larger number of residents, some of whom will be above the median income level and will pay higher taxes to offset the lower tax areas.

Departments that are staffed by on-duty personnel are guided by National Fire Protection Association standard 1710, which provides guidance on the need for four persons on fire apparatus in normal risk areas and arrival of the first fire apparatus within four minutes of leaving the station.

Additionally, the standard requires the arrival of all first alarm fire apparatuses to be based on the needed fire flow of the incident. There are similar requirements for response to emergency medical calls. It is this standard that drives the response time mapping and allows for the proper placement and number of new fire stations within a community.

Staffing Is the Biggest Expense of Any Fire Department

Staffing is the biggest expense of any fire department, whether the personnel are full-time or part-time. Because of this, the budget must support the additional or relocated fire stations. Just spreading the personnel out to the new stations will not work.

Firefighters jobs require a minimum number of personnel as well as common sense in areas where regulations do not carry the weight of the law. An example would be the desire to have at least two personnel enter a building on fire and two more to rescue those personnel if an emergency occurs. This is only fair to those who risk their lives to protect others. 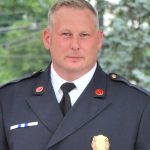 Dr. Randall Hanifen serves as a shift commander at a medium-sized suburban fire department in the northern part of the Cincinnati area. Randall is the CEO/principal consultant of an emergency services consulting firm, providing analysis and solutions related to organizational structuring of fire and EMS organizations. He is the chairperson and operations manager for a county technical rescue team. From a state and national perspective, he serves as a taskforce leader for one of FEMA's urban search and rescue teams, which responds to presidential declared disasters. From an academic standpoint, Randall has a bachelor’s degree in fire administration, a master’s degree in executive fire service leadership, and a doctoral degree in business administration with a specialization in homeland security. He is the associate author of “Disaster Planning and Control” (Penwell, 2009), which provides first responders with guidance through all types of disasters.