Fight Cancer at Your Fire Department

Like many other fire departments across the country, the Roanoke, Virginia Fire-EMS Department has been hit hard with cases of cancer among its 240 members. In the last six years, more than a dozen current and recently retired members have been diagnosed with cancer.

The connection between cancer and the fire service is undeniable as evidenced by a number of studies listed on the Firefighter Cancer Support Network. Compared to the general population, firefighters are at a much higher risk for the following cancers:

Why Are Cancer Rates so High?

How Can Firefighters Prevent Cancer?

There are many resources available to help combat cancer within the fire service. The Fire Smoke Coalition is a great resource as they offer free “Know Your Smoke” training sessions all around the country. The Fire Smoke Coalition’s website also offers informational videos, papers, and even draft SOGs/SOPs that your fire department can adopt. Many SOGs/SOPs are also available from the Firefighter Cancer Support Network’s website.

First of all, firefighters must wear self-contained breathing apparatus (SCBA) any time they are in an immediate danger to life and health (IDLH) environment. Remember, this includes being outside of the structure if firefighters are located in fire smoke. Firefighters must also wear their SCBA during overhaul.

If the department has a gas monitor that’s able to detect carbon monoxide or hydrogen cyanide, monitor the atmosphere during overhaul for these toxic twins. To safely operate without an SCBA after the fire has been extinguished, atmospheric monitoring needs to show levels of 5ppm or less for hydrogen cyanide and 35ppm or less for carbon monoxide, according to National Institute for Occupational Safety and Health (NIOSH).

The toxic twins and other cancer-causing agents present in fire smoke can also attack a firefighter through skin absorption. Absorption rates increase as the body temperature rises, which typically happens at the scene of a fire.

In fact, for every 5 degree increase in the temperature of the skin, the rate of absorption goes up by 400 percent. When body temperature rises, blood vessels closer to the surface of the skin see an increase in flow in an effort to get rid of heat and cool the body. Pores open to sweat, which increases the absorption of toxins and other cancer-causing agents. Some areas of the body such as the face, neck, groin, and throat are significantly more permeable than others.

Tips for Decontaminating on Scene

In order to combat the absorption issue, there are a few things firefighters can do on scene and when returning to the fire station. On scene, use a wet-wipe to clean the skin of contaminants, especially the face, head, neck, and hands.

Some departments require firefighters reporting to rehab to turn in their Nomex hood and get a clean hood. The hood received from rehab is a different color than the originally issued hood, so it is easy to see who has checked in at rehab. Other efforts include Wash Your Hood Sunday (PDF), which like the name implies, reminds firefighters to wash hoods each week.

Firefighters can also decontaminate their gear on scene. The Roanoke Fire-EMS Department recently started carrying a 5-gallon plastic bucket with a garden hose, wet wipes, and brushes for on-scene decontamination. The garden hose should be used for gross decontamination of turnout gear. The same should be done to SCBA’s on scene so they don’t contaminate the inside of the rig. Firefighters should wipe down and rinse off radios, tools, helmets, and gloves on scene as well.

Decontaminate at the Fire Station

Once firefighters return to the station, further decontamination should take place. Turnout gear should be washed as soon as possible in an extractor. If an extractor is not available, then a garden hose and brush can be used for cleaning. The rig should be thoroughly cleaned, including tools, radios, and airpacks.

Firefighters should shower shortly after returning to the station to clean themselves of contaminants and change into a clean uniform. Dirty uniforms should be washed in the station washing machine.

Firefighters should avoid taking contaminated clothing items or turnout gear home or storing it in their vehicle. The department should consider providing air tight storage containers for members who transfer each shift so as not to contaminate an individual’s private vehicle with dangerous carcinogens.

Turnout gear should not be worn around the station other than in the apparatus bay. Firefighters can get their turnout pants on just as quickly in the bay as they can in the bunk room in order to avoid contaminating the sleeping and living quarters. Similarly, avoid wearing turnout gear in the medic truck, especially as this is supposed to be as sterile of an environment as possible for patients.

Firefighters must work hard and be diligent about avoiding cancer-causing agents. The smoke from every fire contains dangerous toxins and must be treated seriously. While firefighters cannot avoid all exposure to cancer-causing agents, they can limit the amount and length of time of exposure. The days of a dirty helmet representing pride in the fire service is waning since the contaminants that make a helmet dirty are endangering the lives of firefighters. 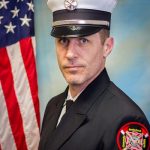 Merritt Kearns, M.Ed. is a faculty member in the Emergency and Disaster Management and Fire Science Management programs at American Military University. Merritt is a Captain with the Statesboro, GA Fire Department.

Matthew Dewhirst, B.S. candidate at American Military University in the Fire Science Management program. He is the Battalion Chief with the Roanoke, Virginia Fire-EMS Department.