The reality is that state and local law enforcement officers are playing an increasingly important role in combatting terrorism, but they often don’t have the level of training necessary for such responsibilities.

The FBI wants to change that.

“We realized that we needed to provide training blocks on fundamental terrorism investigations and the violent crime aspect and provide tools to enhance the capability of state and local analysts,” said Special Agent Steven Shepherd, who is assigned to the Baltimore Field Office and has been with the FBI for 16 years.

To provide enhanced training to local law enforcement, Shepherd brought together a group of organizers from FBI offices in D.C. and Baltimore as well as the Maryland Coordination & Analysis Center (MCAC), which is Maryland’s state fusion center. In addition, they included InfraGard, an association between the FBI and private sector individuals representing businesses, critical infrastructure, academic institutions, and other participating entities, which is dedicated to sharing information and intelligence. 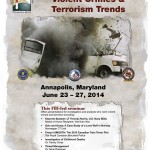 Out of these partnerships was born the Mid-Atlantics INLETS (INtelligence and Law Enforcement Training Seminar), an annual conference aimed at delivering training for all levels of law enforcement on violent crimes and terrorism trends.

This year marks the fourth annual event, which will be held on June 23-27 in Annapolis, Md. Because of the unique partnership with InfraGard, seminar organizers are able to keep registration very affordable, only charging $150 for five days of training. This affordability factor is critical, said Shepherd, because attendees often pay their own way.

What’s New This Year?
There are several topics that are covered every year:

Topics that have received more interest in recent years include:

In response, this year, INLETS added a workshop session on investigation of childhood deaths and a focused seminar on gangs and juvenile sex trafficking to the agenda.

A Focus on International Terrorism
Attendees also wanted to know more about international terrorism so seminar organizers reached out to some of their international partners. One of this year’s general sessions will be a case study of the 2011 Oslo attacks, which resulted in the death of 77 people and 200 wounded, presented by the Norway Counter Terrorism Unit.

“We’re really humbled that they are coming to share lessons,” said Shepherd. “And this isn’t just a case study—they’ll be talking about some of the missteps in detection and response to help prevent something like this from happening again.”

A second general session focused on international terrorism will be presented by the Royal Canadian Mounted Police (RCMP) about the thwarted Al-Qaeda plot to derail a passenger train from Toronto to New York.

This will be the first time either of these international agencies has presented these case studies in the United States.

The keynote address, which will take place at the Navy-Marine Corps Memorial Stadium, will be delivered by Medal of Honor recipients Lieutenant Thomas Norris & Lieutenant Michael Thornton, whose heroic actions have been depicted in Hollywood movies.

A Unique Way to Learn
Since the focus is on training, the seminar is divided into three sections: General Sessions, Workshops, and Focused Seminars. General Sessions occur every morning, followed by a three day mini-series of Workshops where attendees have the opportunity to meet with the same instructor for a total of 4.5 hours of instruction.

“General Sessions are powerful and have an impact on everyone, but there’s a tremendous benefit to these Workshops,” Shepherd said. “It’s very unique to be able to sit down with an expert in a small group setting—more of a classroom setting—and have the freedom to talk about either a case you worked on or something you experienced.”

Attendance at this conference is open to all levels of law enforcement, DOD personnel, military, intelligence agencies, and InfraGard members. The training is certified for in-service credits for sworn law enforcement officers. In addition, American Military University has partnered with INLETS to ensure that continuing education units (CEUs) are approved for non-sworn officers.