Today marks the home theatre release of this summer’s highly anticipated and top grossing superhero epic, The Avengers. In case you missed the four-year build up to this film beginning with Iron Man, a group calling themselves Strategic Homeland Intervention, Enforcement and Logistics Division (or S.H.I.E.L.D.) approaches billionaire superhero Tony Stark (who, in his spare time, is Iron Man) on The Avenger Initiative. This project of SHIELD’s brings together Iron Man, Captain America, Thor, and the Hulk, and teams them up with SHIELD operatives Black Widow and Hawkeye to stand against any foe that threatens the Earth. In The Avengers, this initiative is exactly what is needed when Thor’s brother, Loki, leads an extraterrestrial army called the Chitauri. The setting of this ultimate stand-off: New York City, New York. 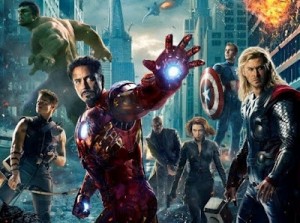 Following the runaway success of this ambitious film from Marvel Studios, experts put their heads together and seriously looked at the collateral damage and recovery costs from such a showdown between beings from another dimension and Earth’s mightiest superheroes. For The Hollywood Reporter, Chuck Watson and Sara Jupin of the Kinetic Analysis Corporation, one of the nation’s top disaster-cost prediction and assessment firms, estimated property damage, economic recovery, and cleanup totaling $160 billion when the dust finally settled:

“The extensive damage to Grand Central Terminal could prove highly disruptive, depending on the subsurface damage to the subway system. Collapsing buildings can cause significant damage to subsurface infrastructure such as gas, communications and electrical systems. Detailed site surveys will be required to assess the state of the subterranean infrastructure.”

In light of this report, what steps could be taken to prepare for an attack of this magnitude? If say, tomorrow, a wormhole were to appear in the skies above Manhattan, the District of Columbia, or San Francisco, what would you need to be ready and how could you best assist our public safety outlets?

Stay off the public airwaves and do not call emergency services. Police and fire services will have a lot on their hands dealing with the Chitauri, so civilians should stay off cellular networks and landlines. The best possible lines of communication between loved ones may come in the form of active WiFi networks which should still be accessible as they were during Sept. 11, 2001.

Have a meeting place and evacuation route planned. In sudden emergencies such as interdimensional wormholes opening above major metropolitan areas, it is good to have a meeting place outside the home but close by such as the patio firepit or the mailbox. Once at the designated meeting place and everyone is accounted for, it is best that you and your family take your planned evacuation route. Make certain before you begin that you not only have a destination planned, but multiple routes to said destination.

Invest in an emergency radio with USB charger. Modern emergency radios, still offering the option of a hand-crank, are now solar-powered, and come with USB chargers. (Test your devices, though, to make sure all your USB devices charge up properly.) Keep in mind that charging USB devices will drain the radio battery faster. Make certain the radio also picks up National Oceanic and Atmospheric Administration (NOAA) stations as they will be able to offer information in real time to any changes of wormholes lingering in the skies above.

Prepare (and maintain, at least twice a year) a quick evacuation kit. Your evacuation kit should include bottled water, non-perishable food, a basic tool kit (complete with duct tape), a First Aid kit with room for any medications specific to you or your family’s needs, clothing and bedding. An option to consider as well is a portable fire safe of important documents, just in case you think you will be evacuating for a prolonged period of time.

The Avengers may lead you to believe that Loki and his Chitauri allies might be too much for city police and firefighters, but as you prepare for evacuation, consider the advantages our public safety possess:

Police have access to varied caliber of firearms. While most of the police in the field will have standard sidearms, they will have access to weapons of higher calibers back at their headquarters. The argument “But the NYPD did little against the Chitauri in the movie…” is moot as those police were unable to reorganize at their respective precincts. Also consider that both Black Widow and Hawkeye were able to dismount many Chitauri off their attack cycles, and Hawkeye is an archer.

Police also have immediate access to gun ranges. Trust me – I have friends in law enforcement. They are training for this.

Firefighters have access to weapons of their own: high pressure water hoses. Returning to the example of Hawkeye dismounting Chitauri off their attack vehicles – if an arrow can do this, imagine what it would be like if a firefighter’ hose drew a bead on one of these interdimensional invaders? Basic physics turns water into a baseball bat delivered with 400-600 pounds per square inch. If the invader is cruising low to the ground, they will make a hard impact against the ground. If the invader is cruising at a high altitude (as seen in the film), they will make a harder impact.

While fun to speculate about what would happen if we did find a rip in the fabric of space and time appearing above our major cities, if you go back and follow these steps – and consider the advantages our public safety departments have on hand – you are not only prepared for an alien invasion, but also for a wide variety of real dangers. If you live in a rural area prone to flash fires in the summer, in coastal cities where hurricanes are expected, or in Midwest states known for heavy winters, these tips for evacuation can still help keep you safe.

As for our public safety servants, there is one other advantage they hold – public trust. Unlike Thor who  comes from another world, or Captain America who is still trying to get with the times, or Bruce Banner who created his alter-ego by accident, the men and women in our public safety departments (some of them alumni or students of APUS) are studying the latest technology and techniques in keeping you safe. Their priority is your safety. Our police, firefighters, and disaster relief engineers are ready and on call, whether it is during or after a hurricane, an earthquake, or a flash flood.

And yes, they are even on call when under attack by a giant Stay-Puft Marshmallow Man.