Concealed Carry on Military Facilities? Police Response Must Be Considered

*A similar version of this article appeared on another APUS blog, In Military Education.*

On July 16, a lone gunman opened fire on a military recruiting station in Chattanooga, Tennessee. The gunman then moved on to a U.S. Navy/Marine Corps Reserve Center, just miles away, ultimately killing four Marines, one sailor, and injuring two more people.

In the wake of this attack, there has been considerable public discussion about granting servicemembers the use of concealed weapons on military installations. While this attack is being considered a “lone wolf” operation, ISIS has made public claims of responsibility. The terror group has been encouraging such lone wolf attacks for some time, calling on their supporters within the U.S. to act.

[Related Article: Lone Wolves: Are They Really Alone in the Radicalization Process?]

At first, one might think, “yes, of course, let them carry”, but the decision is more complicated than that. Allowing every soldier, sailor, Marine, and airman to carry without considering the finer details could have deadly consequences. 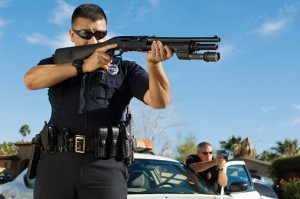 In the last couple of years, law enforcement across the country, especially within the federal sector, has been hammering active shooter training for their officers. The chaotic and unknown nature of active shooter scenarios, coupled with the panic of victims, has created challenges for first responders.

Typical response guidelines encourage the first officer or officers on the scene to make entry and neutralize the threat as soon as possible to prevent further bloodshed. One issue of major concern in active shooter response is the danger of “blue-on-blue” incidents. This term refers to friendly fire situations where officers draw down or even fire on other officers unknowingly, usually because one officer is either off-duty or in plain clothes and therefore not recognized by the responding officers.

Case in Point: A Fort Hood Scenario
One might ask how this relates to concealed carry on military facilities. Imagine a scenario much like the one that occurred at Fort Hood in 2014. In this situation, an Iraq war veteran, who suffered from apparent mental health issues, opened fire on other servicemembers. Three people were killed and 16 were injured before the shooter took his own life.

Now put yourself in the shoes of a DoD police officer responding to that 9-1-1 call just around the corner, only in this scenario military members are permitted to carry concealed weapons on post. As you enter the building, gun drawn at the ready, clearing a hallway, you spot a male wearing an army uniform, gun in-hand emerging from an office. Assuming you have the presence of mind to use verbal commands before resorting to deadly force, you shout “STOP” and as you do, the on-edge soldier turns in your direction, gun raised. The likely ending to this scenario is that one of the two shoots the other before realizing that neither is the suspect.

This is just one of the many concerns with on-post concealed carry. Whatever good can come of soldiers carrying will quickly be lost if soldiers and police officers start dying at each other’s hands.

Training and Policy Considerations
This is by no means an effort to prevent policy change. As a member of the armed forces myself, I have wanted to see this law enacted for quite some time. However, in order to prevent more tragic loss, substantial consideration needs to be given to training and policy should on-post concealed carry come to fruition. Those in our nation’s military share at least one thing in common if nothing else: The desire to help people and defend this country.

There are several possible considerations that could reduce the probability of blue-on-blue situations. Perhaps, while on post, servicemembers should be required to convert to open carry, thus allowing others to know who is and is not, which might help when coordinating a response.

Perhaps policies need to be enacted that specify if an active shooter scenario arises, armed servicemembers are to stay sheltered in place and only use the firearm if the shooter is within their immediate vicinity.

Another idea is to require servicemembers wishing to exercise their right to carry, to undergo training similar to the “plain clothes encounters” training that many police officers receive. This training, which most states require as part of their basic police curriculum, reinforces what off-duty or plain-clothes officers should do if they encounter responding officers.

Regardless of which direction policymakers take on this issue, safety is the number-one priority. While the possibility exists for accidents to happen, servicemembers should not be deprived of the means to defend themselves, especially considering the current threat climate.

About the Author: Andrew Cannito has been a member of the emergency services community for nearly 10 years, and has served in the United States Army for more than seven years; currently serving in the Military Police Corps. He has worked in various disciplines with the public safety sector, and continues to expand his knowledge diversity in the homeland security field. In April of 2015, Andrew founded and became the first elected President of the Homeland Security Network at American Military University.

Special Note:American Public University System (APUS) expresses its sincere sympathies to the family, friends, colleagues and former American Military University classmates of USMC Gunnery Sergeant Thomas Sullivan. A Purple Heart recipient honored for his two courageous tours of duty in Iraq and an AMU graduate in Criminal Justice, GySgt. Sullivan was an inspiration to all who knew him.

Emergency Preparedness for People Who Have Disabilities