Changing Your Approach to Vehicle Stops Could Save Your Life

They say you can’t teach an old dog new tricks, which doesn’t bode well for law enforcement officers as there is perhaps no other group of professionals more set in their ways. I once remarked that an agency I worked for should change the motto on the side of their cars to “That’s Just The Way We’ve Always Done It.” However, it’s critical that as the dates on the calendar progress, so too should the tactics and procedures used by officers to fight crime and keep themselves safe.

One of the most outdated techniques that most police officers still employ is approaching vehicles from the driver side during a motor vehicle stop. Officers must worry not only about the dangers posed by passing vehicles, but also the potential threat of the occupants in the vehicle.

Benefits of Using a Passenger-Side Approach

While accurate statistics aren’t readily available, I would posit that a dozen or more officers are injured or killed each year by passing vehicles during a traffic stop.  Many times, these situations could have been avoided had those officers used a passenger-side approach. In my near-decade-long policing career, I have lost count of how many times I’ve seen—or been involved in—incidents on the road where a passing car has buzzed within inches of a stopped vehicle. Had an officer been standing at the driver’s window in those instances, it could have been devastating.

Passenger-side approaches don’t just provide a layer of protection from passing vehicles; they also provide officers with enhanced tactical and investigatory advantages. Due to decades of exposure to police procedure via television shows, movies, and personal experiences, the vast majority of the motoring public expects an officer to approach their vehicle from the driver side. If that motorist happens to be an assassin lying in wait, the officer is predictably walking into a fatal encounter. Conversely, if the officer approaches at the passenger side, it can often leave a driver looking over their shoulder, wondering when the officer is going to approach. All the while, the officer is standing at the passenger-side window, observing the driver’s actions and scanning the interior of the vehicle for any weapons or contraband.

If you don’t believe me, watch this video of a Westerville, Ohio police officer’s vehicle stop. As the officer approaches the vehicle from the passenger side, he is able to see that the driver is holding a gun. For nearly 45 seconds, he stands at the window undetected while he alerts dispatch and calls for backup units. While all of this is going on, the driver is seen looking out his open window, visibly wondering where the officer is. It isn’t until the officer begins to issue verbal commands to the driver that the driver notices his presence on the passenger side.

My good friend and mentor, retired police officer Dennis Benigno who now owns a police training company, taught me the passenger-side approach technique several years ago. Since then, I have employed it on nearly every vehicle I stop. The only exception I make is in the few situations where it is physically impossible to get to the passenger side due to some type of topographical or environmental restriction.

While I can recount numerous experiences when this approach has benefited me from both a tactical and investigatory standpoint, one particular stop sticks out in my mind. Several years ago, I was standing at the passenger side of a vehicle while I watched the driver remove bags of heroin from his center console and quickly stuff them under his seat, all while nervously peering over his shoulder, awaiting my arrival at his window. My vantage point gave me a clear view of his actions and resulted in a straightforward arrest.

I strongly believe that every patrol officer should update his or her vehicle stop procedure to a passenger-side approach technique. Officers will be amazed by how much more they can see into the vehicle. Making this minor change might even save their life. 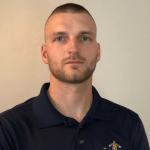 About the Author: Daniel Foster has 10 years of law enforcement experience and nine years of military service in the United States Marine Corps and Pennsylvania Air National Guard. He has served as a patrol officer, SRT operator, field training officer, and criminal interdiction team leader. Daniel specializes in drug-related enforcement and is an IACP-credentialed Drug Recognition Expert. Daniel also works as a law enforcement instructor and maintains numerous instructor certifications. He holds a B.A. in criminal justice and an M.A. in criminal justice from American Military University. To contact the author, please email IPSauthor@apus.edu. For more articles featuring insight from industry experts, subscribe to In Public Safety’s bi-monthly newsletter.