Brexit Chaos: Why It Is A Major Terrorism And Security Risk

A government in crisis. A Brexit process in free-fall. A Prime Minister (as at the time of writing) hanging on by her fingernails. And the much-debated implications of ‘no deal’ or a ‘bad deal’ looming large: food and medicine shortages, endless border queues for people and vehicles, a sharp drop in the pound and in the UK’s credit rating, export chaos, substantial job losses, a house price collapse and food price inflation.

National security and public safety are just as much at risk.

Last month, the UK’s most senior counter-terrorism officer warned that law enforcement agencies had failed to keep pace with the evolving terrorist threat. It is becoming ever clearer that there is a perfect storm in the UK right now. The ongoing Islamist threat, which continues to morph from planned operations to the indiscriminate targeting of the ‘do-it-yourself jihad’. Returning fighters from Iraq and Syria. The rise of the far-right, which has seen a large increase in the number of offenses since the murder of MP Jo Cox in 2016. And ever more provocative moves by Russian military intelligence.

Assistant Commissioner Neil Basu told a committee of politicians “I’d like to tell you we are matched to the current threat, but the reality is we are not.” With 700 ongoing counter-terror investigations, 3,000 active people of interest and 20,000 people under review, it’s hard to argue.

And it’s about to get a whole lot more difficult.

In Berlin earlier this year, the Director General of MI5, Andrew Parker, addressed a symposium organized by BfV, Germany’s domestic security agency. “Europe faces an intense, unrelenting and multidimensional international terrorist threat,” he said. “Terrorism is not new. But, amplified and accelerated by the reach and tempo of technological change, it is more global, multi-dimensional and of a different order of pace and intensity… The threat landscape is shared across the nations of Europe, and that is how we address it.” 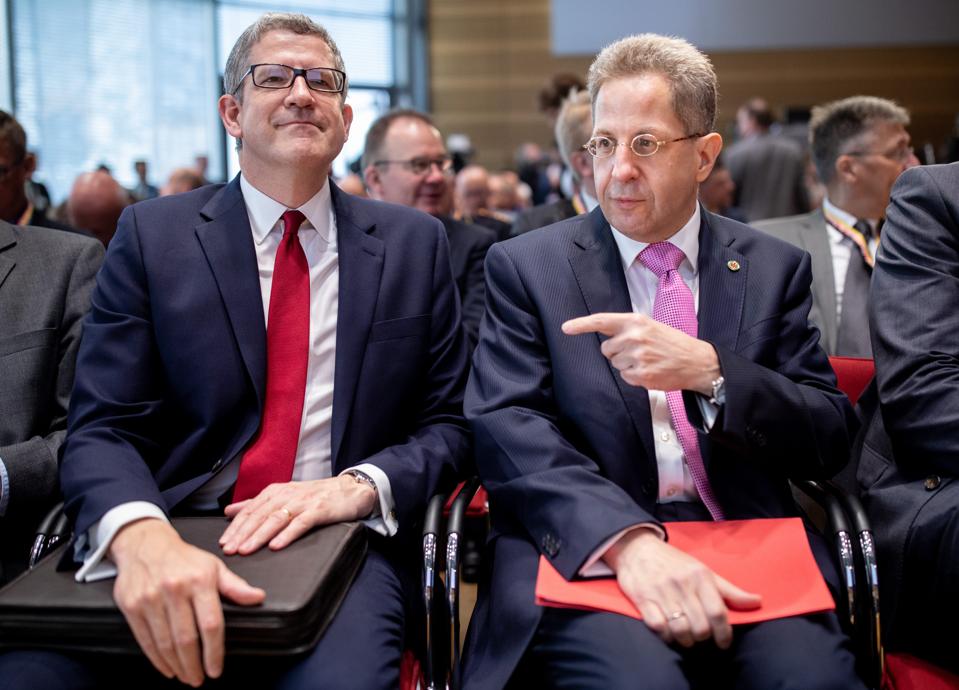 Mr. Parker’s speech emphasized common values and partnership. His message was clear. And he’s not alone in delivering it.

According to Sara Thornton, chair of the UK National Police Chiefs’ Council (NPCC), “EU tools allow us to respond quickly and intelligently to crime and terrorism in the UK and the EU. They make us better at protecting the public.” The risk, she explained, is that “the fallbacks we’re going to have to use will be slower, more bureaucratic and ultimately less effective. It will make it harder for us to protect UK citizens and make it harder to protect EU citizens. We are determined to do everything we can to mitigate that, but it will be hard.”

Safety And Security In Numbers

Behind sleek blue and yellow signage, Europol’s concrete and glass HQ in The Hague is all business. Tasked with supporting the EU’s member states in the fight against terrorism as well as cyber and serious and organized crime, Europol is a response to our increasingly connected world, where networks of terrorists and criminals cross borders, as must those charged with pursuing them. Central to Europol’s work is a set of data sharing agreements, processes and systems.

The current 585-page draft Brexit agreement looks set to guillotine UK access to these well-established data and process systems once the transitional period ends. Loss of European Arrest Warrants. Loss of access to the Schengen Information System (SISII), the “European-wide IT system that helps facilitate European cooperation for law enforcement, immigration and border control purposes”. Loss of access to the European Criminal Records Information System (ECRIS). Sub-optimal border security, prompting the UK’s National Audit Office to warn that “organized criminals and others are likely to be quick to exploit any perceived weaknesses or gaps in the enforcement regime.”

And the loss of membership of Europol itself. Which will have consequences.

The European Counter Terrorism Centre (ECTC) sits within Europol, its objective to provide the EU with a strengthened response to international terrorism across the EU’s member states. “Europe is currently facing a vicious, new form of international terrorism,” reads the ECTC website. “The clear shift in Islamic State’s strategy of carrying out special forces-style attacks in the international environment, with a particular focus on Europe, as well as the growing number of foreign terrorist fighters, demonstrates the new challenges facing the EU and its Member States.”

Whatever else Brexit may or may not deliver, there is no credible argument that it will better protect UK citizens from these threats to public safety.

“Global jihadism is a long-term threat,” explains AIVD, the Dutch intelligence service. “The dynamics within the jihadist movement in Europe were greatly impacted not only by a large number of supporters that left their country to join the jihad, or by the considerable number of returnees, frustrated foreign fighters, and those who were killed, but also by the interaction of these individuals with the home front. The appeal of jihadist ideology persists, and constitutes a long-term threat.”

Whether or not there was Russian cyber or financial interference in the Brexit referendum, the subsequent, destabilizing chaos in the UK is certainly welcomed in Moscow. In the same speech in Berlin, Andrew Parker called out the Kremlin’s “aggressive and pernicious actions by its military and intelligence services… We saw this approach again in Salisbury. The reckless attempted assassination of Sergey Skripal using a highly lethal nerve agent put numerous lives at risk.”

Whatever Russian President Vladimir Putin’s objectives in Russia’s nefarious actions on foreign soil, it is clear from the unmasking of GRU operatives and protocols, that there is some element of pushing boundaries to see what reaction comes back. The solidarity within Europe against the attack in Salisbury, and foiled attacks elsewhere since then, readily demonstrate the strength of a unified European bloc in international relations and an expanded border. 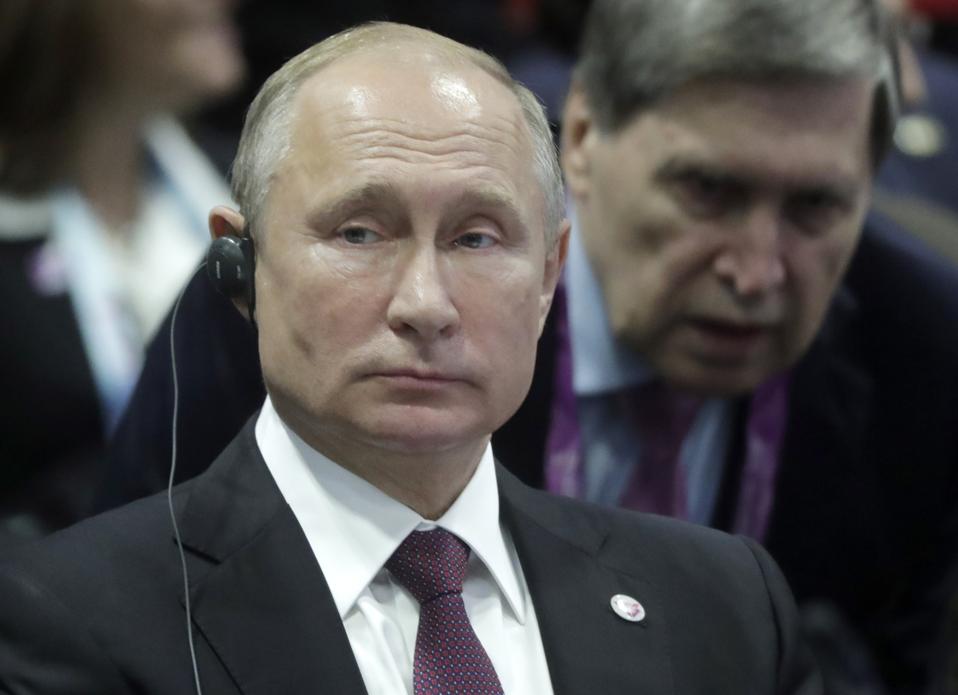 The UK will continue to face Russia as a part of the NATO and EU cohort of nations. And the direct threat to the UK is as nothing when compared to the fear now percolating in the Baltics and Balkans. What is equally important, though, with the potential to have a genuine impact on future UK national security, is the provocative rhetoric coming from France and Germany around the establishment of a “true European army”, with protection against the might of Russia (and America) in mind. An isolated UK, outside the core European trading bloc, and reliant on historical alliances with an increasingly stretched military force, might look east more nervously.

That said, there is actually a much more immediate threat to UK national security, and whilst it might indirectly result from Brexit, it has nothing to do with the European Union.

The special relationship between the United States and the United Kingdom has had its ups and downs over the years, but nothing will have prepared it for the potentially fatal stresses and strains that a Corbyn government might inflict. Corbyn’s Labour Party just about trails Theresa May’s governing Conservative Party in the opinion polls, despite the current political quagmire. But, a shift in Labour Party policy to supporting a second Brexit referendum, or the precipitated collapse of the government under a confidence vote, or the removal of support from Northern Ireland’s DUP, and the status quo could unravel quickly. It is likely, at the time of writing, that the process is already in motion for Theresa May to face a confidence vote from her own party. And as things stand, it looks unlikely that she can win parliamentary support for her draft Brexit agreement.

Insightful analysis isn’t really required to assess the impact that a UK Prime Minister who would favor Iran, Russia and Venezuela over the US and the West, and Hamas and Hezbollah over NATO, might have on the relationship between Downing Street and the White House. Corbyn was a surprise selection as Labour leader, but has rallied the grassroots of the party since. His socialist agenda has played well to the young and to those affected by the economic austerity measures that have endured since the financial crisis and recession. Corbyn’s backstory is littered with controversy, from regular appearances on Iranian State TV to sharing platforms with terrorists and calling for the abolition of NATO. It is inconceivable that he would build a personal relationship with a US president of any party. 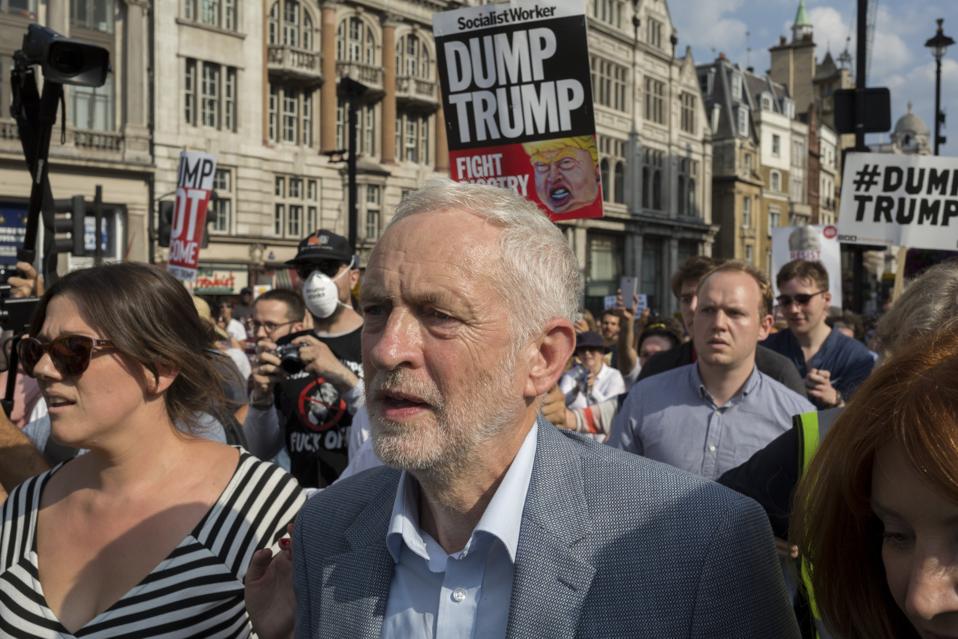 Labour leader Jeremy Corbyn joins protesters against the visit of US President Donald Trump to the UK. (Photo by Richard Baker / In Pictures via Getty Images)

From a security perspective, putting aside the lack of UK support for any military intervention or action and a reduction in UK defense spend and support for NATO, the impact would be changes to the strength of the long-standing ‘Five Eyes’ data sharing arrangements across the US, the UK, Canada, Australia and New Zealand. Established in the 1940s, there is no international security data sharing pact anywhere in the world with the trust, openness and common purpose of the Five Eyes. It is hard to envisage it surviving a Corbyn-led government intact. And, currently, the intelligence shared amongst this group is a very significant contributor to UK counter-terrorism. So much so, that the impact to UK national security of a Corbyn government, potentially triggered by Brexit, arguably dwarfs the security impact of Brexit itself.

So whether directly or indirectly, the Brexit chaos the UK now finds itself mired within represents a very material danger to national security and public safety. There are three options on the table. No deal, the bad deal, or a national change of mind. And, if those charged with the security of the UK are to be believed, only one of those keeps the country safe from harm.

Using Algor Mortis to Assist in Determining Time of Death